The Coach, The Bogey 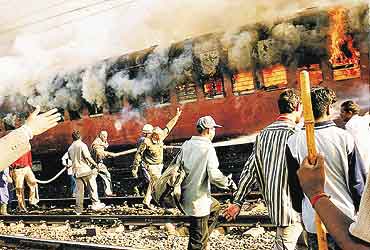 outlookindia.com
-0001-11-30T00:00:00+0553
Is the Godhra report only a political stunt being pulled by Laloo Prasad Yadav? Will the real facts about Godhra never be known because it is such a political hot potato? The truth perhaps is not as obscured by circumstances or motives. Laloo may well have done a disservice to the credibility of the U.C. Banerjee Committee report by blatantly extracting political mileage from it. Yet, senior police officials from Gujarat and technical experts Outlook spoke to believe that to date the Banerjee report offers the most coherent explanation of the Godhra tragedy, if not the complete picture.

So, even as political clouds gather around the report, it has somewhat lifted the fog of smoke that engulfed coach S-6 of the Sabarmati Express, claiming 59 lives, and sparking off the most horrific communal violence in independent India.

Justice Banerjee himself made two trips to Godhra and examined the report of the Gujarat state forensic science laboratory. And throughout his three-month probe, he was assisted by S.K. Dheri, a retired chief fire officer of the Delhi Fire Services. Sources in Rail Bhawan say Banerjee even experimented with an old abandoned railway bogie in Calcutta. It was set afire to draw conclusions from the burn patterns. He also drew on the expertise of Calcutta forensic experts.

Even more significant is the information an independent group of IIT engineers and multi-disciplinary experts from the Hazards Centre, New Delhi, submitted to him. One of the most imaginative steps they took was to locate another coach—16526 gscn—known to have caught fire from the inside while under maintenance at the Jagadhri yard in Delhi. The burn marks were highly similar to those on S-6.

The findings of both the judge and the experts ruled out a planned conspiracy to set the coach on fire. "It is unbelievable that 150 kar sevaks armed with trishuls would allow themselves to be burnt without a murmur," the judge states. "The inflammable liquid theory also gets negated by passengers who suffered burns on the upper parts but not the lower parts of the body," the report notes.

The reason is this: any inflammable liquid thrown from the outside could not have produced the kind of marks found on the top of S-6. Since the only inflammable material inside the coach were the ply and foam berths, the experts say, the fire may have started under a seat. Eyewitness accounts and other evidence indicate this might have been so. There are accounts of cooking in the carriage. If clothes or mattresses under a seat caught fire, it would smoulder for some minutes before leaping out in flames. On the other hand, in the case of an inflammable liquid, the smoke would be noticed immediately.

In the Godhra coach, therefore, the independent experts conclude, "It is possible the fire originated in the...lower berths. The resultant dense and high-temperature smoke spread to the top of the carriage and moved along the ceiling, and between the ceiling and the roof, throughout the length of the coach. The radiative and convective heat generated eventually resulted in a flashover when the fire engulfed the entire coach towards the top."

Before that, the burning foam and rexine would have released cyanide, carbon monoxide and dense smoke, causing passengers to faint. They would later burn to death. Only those near the exits would escape with minor burn injuries.

These findings are clearly not palatable to the BJP. The Godhra incident, with all its anti-Muslim resonance, had been the central plank of the party's successful 2002 assembly poll campaign in Gujarat. Which is why the party dismisses the Banerjee report as mere "secularist propaganda" and insists that the Nanavati Commission appointed by the Gujarat government will present the "real truth" about Godhra and the subsequent riots. .

Yet, as Outlook has learnt, several testimonies and evidence presented before the Nanavati Commission also contradicted the Muslim conspiracy theory. And neither Laloo nor Banerjee could have influenced such accounts. For instance, dsp K.C. Bawa, who investigated the Godhra incident in the first crucial months, in his deposition before Justice Nanavati said he found no evidence of a conspiracy to burn the train nor any involvement of outside or foreign agencies. Then, no passenger, including the kar sevaks, said they saw anyone boarding the train and throwing inflammable material on the floor or setting the coach on fire. In fact, the Gujarat government's own forensic science laboratory had found no trace of petroleum hydrocarbons in the debris, which report is also with the Nanavati Commission.

Moreover, the experts who probed Godhra, also say the post-mortem reports were a "charade", made in 20 minutes. More outrageously, of the 27 post-mortem reports they studied, only five bodies were identified. So, if the majority of the victims are listed as "unknown", how did the Modi government conclude the dead were exclusively kar sevaks?

While the BJP continues to squirm on the Godhra issue, the report's release has come as a bit of a breather for Muslims across the country. The overwhelming sentiment is that a huge taint has been removed. But in the light of the assembly polls in Bihar, the more pertinent question is, will the report do for what the incident did for Modi in Gujarat? 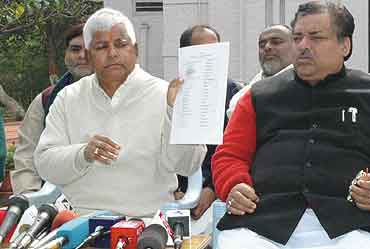 Laloo always says: "Hum thermometer se bukhar lete hain, phir maidan pe utarte hain (I always measure the public's temperature, then enter the political arena)". All his biggest political gains have been made through dramatic gestures designed to win over the Muslim community. He came to national attention after arresting L.K. Advani when his rath yatra entered Bihar in 1990. A few months later, he swept the Lok Sabha polls winning 49 of Bihar's 53 seats. Ever since, even at the hint of a communal spat, Laloo personally controls temperatures like a local sheriff. This is his biggest achievement. And even though he may be in a Congress coalition at the Centre, back in his state he never fails to remind Muslims that the Congress' parting gift to them were the Bhagalpur riots of 1989 which claimed 2,000 lives. He once famously told a Muslim delegation asking for funds: "Khush raho ki hamne tumhe zinda to rakha hai (Be happy that I've kept you alive)."

Even in the 2004 LS polls, the RJD had plastered as many posters of the Gujarat violence as of Laloo himself. His highly-publicised trips to Pakistan and to Yasser Arafat's funeral too served the propaganda. There are lesser known facts: of the 20 securitymen allotted to him in Delhi, nearly 15, including the chief, are Muslims. The delicate point is: will this vote get splintered? With Bihar on a downward spiral and with the BJP bogey no longer that powerful, there were signs that the anti-incumbency bug could have infected some Muslims after 15 years. Laloo sought to stem this by pulling the Godhra rabbit out of his hat. Some sceptical Muslims may dismiss it as a stunt. But others might rally around him as the 'king' of secularism.

His opponents' reactions are revealing. The Godhra report will certainly discredit the JD(U)'s Nitish Kumar as the ex-railway minister is now being accused of covering up the truth. That is why the BJP-JD(U) has gone crying to the Election Commission saying the report should not be used for propaganda. Strange, considering the BJP never hesitated to use Godhra for electoral mileage.

Given the EC's strictures, Laloo will no longer wave copies of the interim report. But that won't stop him from making tangential references to "having exposed the conspiracy to defame Muslims".The national press too may condemn him for politicising and thereby reducing the credibility of the Godhra report.But one secret of Laloo's success is that the greater the opposition against him, the greater the mobilisation of his supporters.