Live coverage of war has trivialised its excesses, reducing it to a spectacle 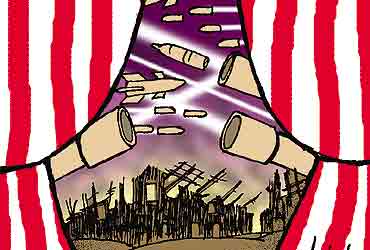 outlookindia.com
-0001-11-30T00:00:00+0553
How would you feel if you saw your homeland being bombed live on television? Imagine you are in your living room, watching cluster bombs and missiles raining down on the playground of your memories—on the parks you played in, the university you got your degree from, the temple you got married in, the homes of friends and relatives you visited or the government office you got your driving licence from. One should not be fooled by the propaganda about "precision bombing". After all, not just Iraqis, but even Syrians and Jordanians—apart from Brits and Americans—have been killed in "friendly fire". So, if you had to watch the destruction of your country, wouldn't you burn with anger, resentment, humiliation? Wouldn't the live telecast of such bombings then be a violation of the Geneva Convention?

But the Geneva Convention doesn't deal with such issues, because when it was framed there was no live TV coverage of war. You see the triviality of Bush's protests when Iraqis parade American prisoners of war on TV. The double standards of not just the Bush administration, but even the American channels, was so obvious when they refused to air this footage. Just the previous day they had no compunction in showing footage of surrendered Iraqi soldiers. Can one really fault the Iraqis for describing some US channels as being part of the Bush war effort? They blatantly cooperate with Bush, who knows that like with Somalia, domestic support for his war will evaporate if such footage is telecast repeatedly. American psyche must be protected at all costs. But what about the poor Iraqis? Far more humiliating than seeing a few captured soldiers is witnessing your nation being bombarded.

In 1991, when the world watched live coverage of war, stunned viewers were riveted to their TV sets. But this time around, there is something obscene and inhuman about the coverage. Live coverage has trivialised the bombardment of Baghdad into a spectacle of fantastic fireworks. Horrors of war are sanitised and special effects glamorised to reduce war to entertainment, an extravaganza, a spectacular son et lumiere show. Adults and children watch Baghdad burning, unmindful that beneath the rising mushroom clouds lie charred men, crushed women and children with their heads blown off; an expanding rubble of shattered lives, wrecked homes and destroyed hopes. Instead of priding themselves on their "shock and awe" campaign, Bush officials should worry about how many hate-filled, vengeful anti-American terrorists were born in those very first moments of bombardment.

When you humiliate people to unendurable limits, there are only two possible reactions from the victims—either they surrender and die quietly, or they fight desperately to try to come out of the trap. They know either way they will die, but it is better to die fighting. This is the basic logic behind the last-ditch resistance Iraqis are putting up against the coalition. Americans must realise that national honour and pride are not US patents. Of course, the other aspect about the unexpected resistance is that much of the fighting is waged by Saddam Hussein's elite Republican Guard or ideologically motivated loyalists. Iraqi civilians have suffered too much and too long to know better than to take sides. So they huddle in their homes. When a clear victor emerges, so will the Iraqis—if only because all they want is to live normal, peaceful lives.

But the new development is that most TV viewers now find live coverage of war boring. Initially, it was exciting to watch mushroom clouds, raging fires, thundering explosions and tanks racing across the desert wastelands. Then it got repetitive. Visuals weakened, became predictable. War ratings fell. Viewers switched to their favourite serials.Friends topped ratings. This time around, the war against Iraq is not going along expected lines, not only for Bush, but for TV news networks as well. In 1991, cnn became a global phenomenon because of its live coverage of war. This time it did not have its own reporter in Baghdad. Everybody miscalculated how slow the coalition advance would be and how quick the war fatigue among viewers.

Till now, governments, arms dealers and TV networks were the only groups that benefited directly from war. Perhaps now they will realise the futility of war. War is inhuman, wrong, immoral. It's also bad business. This war will be catastrophic for the US economy, which in turn will have a domino effect on the world economy. Belatedly, politicians and media executives will come around to the peacenik view, if only because they now realise that war guarantees neither votes nor high ratings, but comes with a huge price tag evident in devastated lives and ruined economies. It may seem preposterous now, but some day, Bush may be hauled for war crimes—for killing innocent Iraqi civilians and for hastily subjecting his own marines to death and mutilation in an unwarranted war.

Through history, we have seen that creativity flourishes when there is peace and stability. We have also seen that creativity—be in art or technology—brings more profits, progress and happiness to mankind than does destruction. And yet, through history we have seen how one man, carried away by his ambition, ego or stupidity, can defy this logic to wreak havoc. It is so tragic that even today, one man can hold the world to ransom. Even if the Iraq war ends soon, its consequences will worm into our lives in unseen, unpredictable ways. Bush's dream will be the world's nightmare for a long time to come.

A War Against Eurocrats