Base shrinking and internally riven, can the BJP stay relevant for 2014? 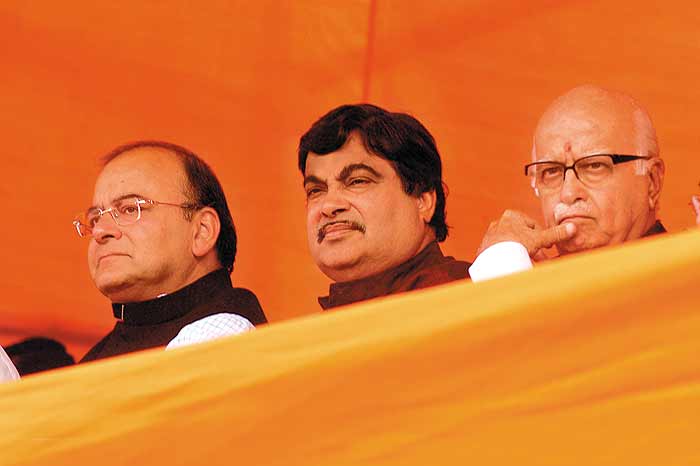 These days both the Congress and the BJP look like losers, a lone consolation prize seeing the plight the other is in. In fact, they even seem to be following similar disastrous paths. For every debacle the Congress faces, there now seems to be one also in the BJP. So it was last week when the Congress lost seven assembly bypolls in Andhra, the state that delivered 33 party MPs in ’09 (its largest contingent by far). Not to worry, the BJP kept apace losing the byelections to an LS seat in Karnataka and an assembly seat in Gujarat. Meanwhile, if Mamata Banerjee and the revolving door of rail ministers was embarrassing the Congress/UPA, the BJP was equally shamed by yet another full-blown B.S. Yediyurappa headache in Karnataka and a small rebellion in Jharkhand over an RS seat.

Both the national parties are also faced with shrinking bases. Neither seems likely to get a simple majority on its own in the event of a Lok Sabha poll anytime soon. Simultaneously, there is a lot of buzz about regional parties forming a loose federation in which the Congress or the BJP gives outside support.

Thankfully for the two parties, for now that’s easier said than done. True, regional parties are growing in strength but the algebra involving them forming a government is complex and does not add up. The more likely reality is that in the event of a UPA-Congress collapse/defeat, it’s the BJP that will gain from anti-incumbency. And if it does indeed emerge the single largest party—even if that’s an unimpressive 150 seats—there is likely to be a domino effect with regional parties. For if there is a perception of a Congress defeat, besides the parties already in the NDA (Shiv Sena, JD(U), Akali Dal) others like the BJD, AIADMK and the TDP too will make some arrangement with the BJP.

It seems unlikely today but let’s not forget some recent history. Both the AIADMK and DMK have taken turns forging a pre-poll alliance with the BJP, in 1998 and 1999. Of course, that was the age when they had a charismatic, unifying leader in Atal Behari Vajpayee and in both the above-mentioned elections BJP got four seats in Tamil Nadu. But then even Mamata Banerjee was part of the NDA and the TDP was giving outside support.

“The BJP must accept there’s no growth in the non-traditional areas. That said, it has a good record with allies.”
Swapan Dasgupta, Columnist

So it is that there is often no logic to coalition politics. It’s about sudden accidents and cementing of ties through the glue of numbers and power. That said, a lot has changed since the days when the NDA was in power. Vajpayee has faded away and L.K. Advani’s determination to hang on and not project another leader has led to an erosion in central authority. Now the RSS dictates matters more openly, like the choice of party president and Rajya Sabha seats. In the recent round of RS allocations, many RSS nominees quietly slipped in though there was a furore when a London-based businessman, Anshuman Mishra, was promised a seat from Jharkhand. Veteran Yashwant Sinha declared an open revolt and the central leadership had to backtrack. A small bushfire in a party known for its great rivalries and competing egos.

All that bad energy has certainly sapped the structure at the national level. What is left today is a franchise of strong state leaders who often ignore the central leadership or compel it to bend to their wishes. It often happens with Gujarat CM Narendra Modi who cannot be dictated to by anyone from the BJP or even the RSS. Raman Singh in Chhattisgarh, Shivraj Singh Chauhan in MP and Prem Kumar Dhumal in Himachal Pradesh are pretty much left to their own devices (each are strong in ways different from Modi as they do not challenge the RSS). 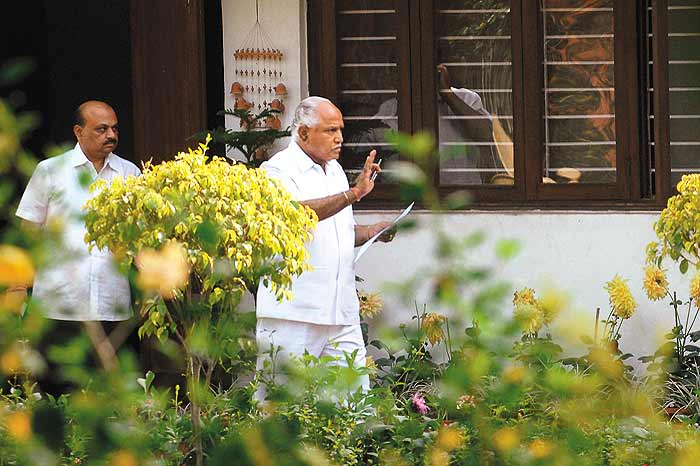 The most recent display of strong-arm tactics came from Karnataka when B.S. Yediyurappa dug in his heels, put on show the number of MLAs on his side and insisted on being made CM again. The BJP national leadership made the assessment that already things have gone badly wrong in Karnataka but if Yeddy isn’t placated he would wreck things further.

A major impediment the BJP faces under Yediyurappa is that instead of consolidating the gains of the 2008 assembly polls—where people from various castes and communities voted for the party—it has slowly gone back to its identity of the ’80s and ’90s. Back then, it was perceived as a party of Lingayats—who constitute nearly 18 per cent of the population in Karnataka, particularly in the north.

“The BJP allowed the dance of mammon in the state. From a progressive state, we have become a regressive one.”
Dr Malaka Reddy, Cong MLA, Karnataka

In the short term, the BJP may have decided to hold on to this core. But the perception of a one-community-party hurts the electoral prospects of the saffron party in the long term. The demographics of most assembly constituencies in the state is such that Lingayats will need the support of smaller and backward communities to win. If the BJP goes to polls projecting itself (even by default) as solely a party of Lingayats, it may suffer an erosion. In 2008, the BJP and the Congress faced a straight contest in 145 assembly constituencies and the former won a majority of the seats. Now, if there is even a one per cent swing away from the party, the situation is likely to reverse in the favour of the Congress as the difference in voteshare then was just 1.4 per cent.

With the increasing perception that the BJP has become a Lingayat party, the other communities in the state have polarised and created chunks of caste consolidation. In south Karnataka, the Vokkaligas have consolidated, in the north the Dalits, tribes, backward classes and minorities have become more conscious of their identities. As senior journalist Mahadev Prakash puts it, “Besides communal divisiveness, the party has also embraced the mortal idea of caste divisiveness in the state. This is a double whammy for the party.”

Many BJP workers and senior functionaries believe the Karnataka unit is in a state of terminal decline. “Yediyurappa’s greatest achievement is that he has made even Sangh leaders in the state conscious of their respective castes. He has approached the RSS on caste lines,” says a BJP MLA. Instead of going down in history as a leader who opened the doors of the south for the BJP, he is currently poised to gobble up the entire BJP with his anger, indiscretions and personal agenda. The situation now is that central leaders fear him, adds the MLA.

Coming to power in Karnataka in 2008 should have opened the gateway to the other southern states and the Union territory of Pondicherry, but that has not happened. On the contrary, the many corruption and mining scandals have become a source of embarrassment for the national party. The southern states, including Pondicherry, account for a total of 130 LS seats. The BJP does not have a single Lok Sabha seat in Andhra Pradesh, Tamil Nadu, Kerala or Pondicherry. Their voteshare in the previous elections and the kind of traction the regional parties and the Congress have in these states suggest the BJP will not open its account in 2014 as well.

In which case, they are left only with the 28 seats of Karnataka to seriously contend for. In 2009, the BJP won 19. But, with the present flop show in the Chikmagalur-Udupi bypolls, this number has now gone down to 18. Given the level of engagement of the elected representatives in their constituencies, the scams and scandals that have dogged the party and the altering caste arithmetic, this number is largely expected to slip to single digits in 2014.

“The BJP has now become divisive on caste too. If it goes to polls as a Lingayat party, it won’t get more than 30 seats.”
Mahadev Prakash, Senior journalist

The Chikmagalur-Udupi result—the Congress won here by a margin of over 45,000 votes—is a portent of things to come. The seat is made up of eight assembly segments, seven of which are controlled by the BJP. Despite this, the Congress won and that too with a margin that has shocked the Sangh parivar in the state. This is because the constituency is not only a Sangh bastion and a Hindutva laboratory (Baba Budangiri is in Chikmagalur; the region has eight powerful Hindu maths) but was also the seat vacated by the sitting CM, Sadananda Gowda. Yediyurappa did not campaign here and is now using the debacle to reclaim the chief ministership and parade his indispensability.

But the reality is quite the opposite. Traditionally, these eight assembly segments have been controlled by the Sangh parivar and the defeat is a verdict against their communal politics and the maladministration of the state government. With or without BSY, the seat would have been likely lost.

So if it’s not growing anywhere and losing what it held, can the BJP dream of power at the Centre again? The mandate is now so fractured and the federal strain in the Indian republic so accentuated, their lone hope lies in the fact that the Congress too appears to be sliding downwards. And as long as Narendra Modi is not projected as a national leader, the BJP will find allies as most regional parties still have anti-Congressism built into their dna. And were the BJP to cross the 170-mark, then even Modi may be able to duck the national untouchability barrier.

By Saba Naqvi in Delhi and Sugata Srinivasaraju in Bangalore