The Charkha Spun Its Own History

So, you thought you knew all about Gandhi. His grandson tells us there was more to the man. 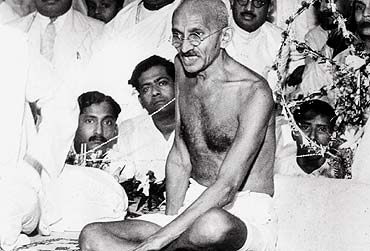 Mohandas was born on October 2, 1869, at Porbandar. His father and uncles served as dewans of Kathiawar princes, including Rajkot, his ancestral home. They were orthodox banias and sticklers for caste traditions. He went to local schools and besides his mother tongue picked up a smattering of English. When 13 he was married to Kasturba, a couple of months older than he. A schoolmate he befriended was a Muslim, Sheikh Mehtab, an athletic lad who persuaded him that eating meat made people strong and indulging in sex was a manly thing to do. Mohandas sampled meat but could not stomach it. He accompanied Mehtab to a brothel but failed to perform. Instead, he turned to his wife with greater zeal. The first major moral crisis came when he was barely 16. He was tending to his sick father. When his uncle took over the nursing he went straight to his room, roused Kasturba and got into the act. While he was still at it, there was a knock on the door and he was informed that his father had died. Thereafter in his mind sex came to be associated with sin.

Mohandas was an above average student. Instead of going to a college in India, he raised money from his family and friends to study law in England. Before he left he gave three promises: he would not womanise nor touch liquor or eat meat. He spent three years in England without breaking any of his promises. He tried to anglicise himself: learnt to speak English with the right accent, wear suits with neckties, learnt how to dance the foxtrot and waltz and study classics of English literature. More important was studying the Bible under the tutelage of people who hoped to convert him to Christianity. He was deeply impressed by the New Testament but was equally, if not more, by the teachings of the Gita and the Ramayana. He also studied the Quran. He spent a lot of his energy propagating vegetarianism. He became an avid reader of newspapers and formed his opinions about English and Indian politicians. He began to look upon Gopal Krishna Gokhale as his role model. He returned home in his turban, frock-coat, cravat and striped trousers as Barrister M.K. Gandhi.