‘The CBI Probe Is To Damage My Reputation’

He is the son of the Congress, now quite determined to wreak destruction on it. 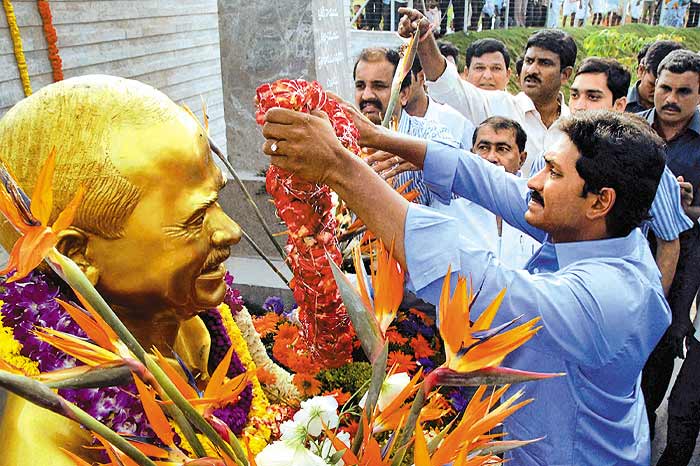 He is the son of the Congress, now quite determined to wreak destruction on it. Jaganmohan Reddy spoke to Madhavi Tata. Excerpts:

The CBI has filed a 68-page chargesheet against you under the Prevention of Corruption Act. You are the Accused No. 1 in alleged quid pro quo investments into the Sakshi Group of industries in return for land sanctioned by the government at cheap rates.

The CBI took eight months to file this chargesheet which proves nothing. There is no case. Hetero Group and Aurobindo Pharma were given land in Medak and Mahabubnagar, both backward districts. The land was idle for three years. What is wrong if land is given to companies which are creating employment? The Supreme Court has issued notices to six ministers on 26 orders issued by them during my father Y.S. Rajasekhara Reddy’s term as chief minister. The government has chosen not to reply to these notices. What the CBI has done is to remove the government’s name and put in my father’s name in the chargesheet.

Isn’t it strange that the CBI has not questioned you even once, considering you are Accused No. 1?

This probe is to intentionally damage my reputation, my character. Me being called or not called does not make any difference. My CAs, company secretaries and other officials have given the CBI all the details it sought. I only attend board meetings.

Is the CBI inquiry helping you gain strength politically.

How can you say that? My people are behind bars! My people are constantly being called by the CBI and are at its beck and call! The pain this probe has caused me is immense.

The YSR-led Congress government had endeared itself to the poor with its welfare programmes. Is that the model you want to follow?

I will do bigger things.

In your public speeches, you target Chandrababu Naidu more than the Congress. Are you keeping a door open for a truck with the Congress at any time in the future?

At the state level, I will not have a tie-up with any party. At the central level, it is too early to say. And why don’t you say Naidu is always targeting me more than the Congress?

What is your stand on Telangana?

We have repeatedly said that it is the central government’s prerogative to take a decision on Telangana. They should take a decision quickly and in a manner that justice is done.

Will you have a tie-up with the Telangana Rashtra Samiti?

Our party will contest all 119 assembly seats in Telangana.

Will your friendship with Akhilesh Yadav, the UP chief minister, translate into a tie-up with the Samajwadi Party at the national level?

Akhilesh and I are colleagues in Parliament and friends. But I will discuss these things only when I have the numbers.