Actresses don't take that route, tarts do, I was told. That's a lame cover-up. 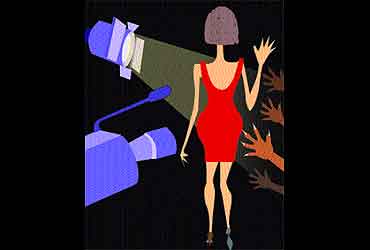 Then, I must, as an actress who's faced the casting couch, ask, "When exactly is a woman an actress and not a tart?"

We may label the less-talented and/or willing-to-do-anything-for-a-break as tarts, but then what, as a creative industry, are we doing to raise the bar for qualifying to be an actor? Every slightly popular model or beauty queen is automatically called an actor and showered with "offers", as if the only criterion is approved good looks while acting talent is an accessory that can be purchased from some weekly crash course. This kind of selection of actors is unheard of in any respected movie industry worldwide. Poor Stanislavski wasted his entire life teaching acting as the intelligent analysis of the human psyche when all that's necessary to be an actor is to be a model or somebody's main squeeze!

Now returning to Y.... "I have been in this industry 11 years," he continues. "No actress has ever slept with a director to get work." I sense his conviction. "I have women friends who'd tell me," he says. "They may not feel the need to," I say. Some may not want to. Others may not have stories to tell. That doesn't mean you discount the ones who do just because they don't fall in the "friends" category. But his innocence is refreshing...just what I needed to instil faith and hope after the lechers I encountered recently.

"A director is in love with his movie!" he tells me. "Why would he damage it by casting someone simply because she slept with him? Don't make it so boring!" Sure, but here's where reality bites. Apparently, juvenile behaviour is not boring to everyone. And many directors are no longer making movies for the love of art.

Relative power often falls in the hands of men who are psychologically immature, emotionally hungry and sexually predatory. And those who come to them for opportunities are to do what is expected of them in gratitude. This is often an unspoken expectation that victimises the desperate or costs the strong-willed some work.

Y challenged the sleaze theory by listing the current top 10 directors as prime examples of professionalism, but two men in our gathering vouched for the questionable ways of four. But even if Y is right, the point is that over 90 per cent of the "actresses" in the industry are working outside the top 10 list. And here the scum is galore. Many of the top 10, including Y, would be too professionally busy to be involved in this reality. But maybe it's time to get involved.

I always believed such sleazy experiences wouldn't happen to me. I thought I didn't give out that kind of energy. Then, two weeks ago, I realised that whatever my professional "energy", a lech is a lech is a lech. You could know them for six months of getting your script produced through their company which identifies itself as affiliated with a name like Shekhar Kapoor, and you could be just short of signing a respected Hollywood actor for the project, when WHAM!, the guy running the show, who has been decent and straight enough to be considered a friend by now, suddenly starts groping you and saying "I want to sleep with you". And when you get over your shock and tell him "Dude, not interested please!" the entire project is shelved. Despite how dear this project has been to me, doing away with awkward emotional and disgusting physical demands gave me immediate and immense relief, and was worth costing me the production of my art.I have faith that all that should will happen without compromise.

One question I needed answered after this experience is, how on earth does a producer face his colleagues with dignity, knowing it is soon to be public knowledge that an important creative project has been sacrificed because he got personal and the woman stayed professional. The response I got from a man was "They'll understand. They're all men...." I beg to differ. They are not "men...", they are lost. There is a time and place for psychological dysfunction and for functionality...leave the former at home or at a friend's. Don't bring it to work.

The point here isn't tart vs actress. And it isn't about who decides the skirt must drop, man or woman. Skirt-dropping is an activity appropriate only in one's personal life. Sexual relations cannot be an option ever in exchange for work. And anyone having to deal with such a proposition should be able to seek redress. That sexual advances are made in "so many lines of work" (as suggested) does not justify them. Anyone suggesting a personal compromise for work must be held accountable and a respectable movie industry needs an official support system to enforce such standards of discipline. Those not guilty of foul play need not scream "breach of privacy"; that's a dead giveaway to questioning your innocence.

A lot of unwilling women may do away with their benefit-of-the-doubt tendency and suspect foul play from the get-go, but it's a terrible way to live. The solution is to know that others don't decide your fate and success. You do. Nobody is more important to you than your self. Have faith that the highest of ALL powers does not want us to compromise, be untrue to what we believe in. As for those who wish to sleep around for work, it won't be difficult to find filmmakers who value such efforts, and I sincerely say with no judgement passed...may the force be with you too.

(The author is an actress, scriptwriter and poet.)