When Harish Iyer thought of invading the heteronormative domain of ­marriage, little did he know it could involve being panned for casteism 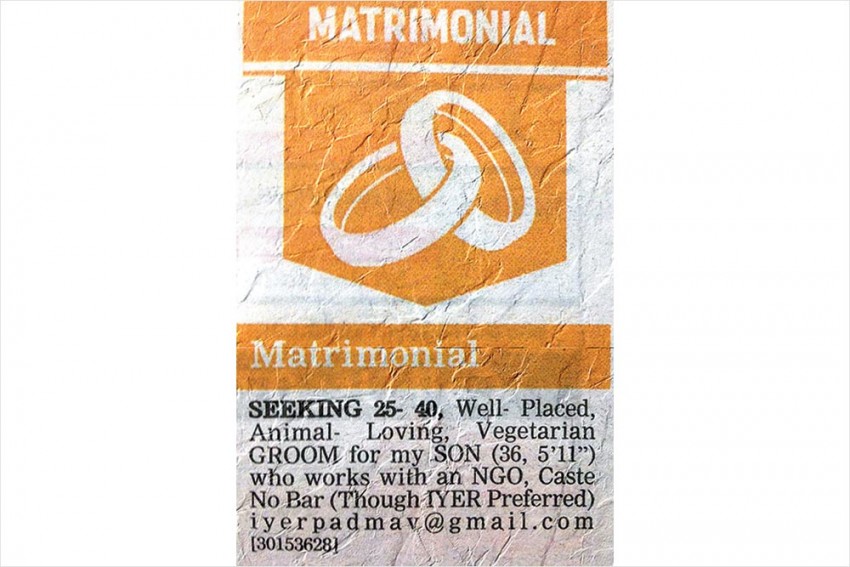 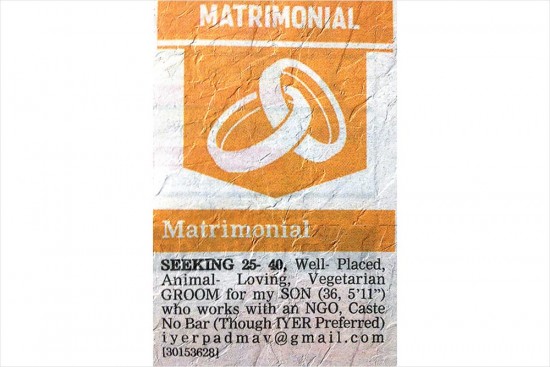 I have never believed in marriage. Or, suffice to say, I have never believed in conventional marriage. This might come as a surprise to those who have read my mother’s matrimonial ad seeking a groom for me. Albeit a die-hard romantic, I have never supposed that one can love only one other person or that one can focus one’s entire life around one other individual. The world is enormous; there is a plethora of people. One gets attracted to more persons than one. Some, more genders than one. And so when my mother proposed placing an ad for me, a gay man, seeking a groom, I didn’t immediately agree. She was concerned I was growing older, and that, after her, I would be alone—a concern that forms a common thread between most parents of single queer persons.

On considering her proposal, I thought that more than the prospect of finding a groom, it’d be nice to invade the heteronormative domain of ­marriage. As a professional who has toiled in communications and experiential advertising fields, the idea of ­disruptive advertisements for social causes had always intrigued me. So, I agreed to her idea and teamed up with her to write an ad. I was 36 and, if I was placing an ad, I was adding the best traits I expected in him. To me, the fact that my husband was a man mattered, but it didn’t count if he was a transgender bisexual man. I wanted him to be vegetarian and be empathetic toward animals and the environment generally. My pets were my kids and I wanted them to be his too. My mother wanted him to be well-settled. It seriously didn’t matter which caste, which creed, which religion he came from—neither to my mother, nor to me—so we added, “Caste no bar.”

At this point, my grandmother walked inside. In her mid-80s, surprisingly, she’s been very accepting of my sexuality. She butted in to ask what we were up to. When my mother explained that we were placing an ad to find me a groom, my 85-year-old grandmother remarked, “Pullaiyyo ponno problem illai… anna nallai iyer pullaiaa irundha nalla irrukum (It doesn’t matter if it is a boy or a girl, it’d be nice though if he is a good Iyer boy).” We found it pretty amusing that one could give up their prejudices with regard to sexuality, but not their preferences where caste goes. My mother and I found ourselves joking about it as well. We thus thought it would be a great idea to make the advertisement look very typical of the standard ads we read on Sundays in matrimonial sections.

Also, we thought the ad would shatter the belief which was prevalent in my family and amongst my relatives that “Iyer boys are not gay”. The ad was a way of saying there were enough ­samples of queer men in every caste, creed, religion, country and region, that one could actually have advertisements for their specificity. 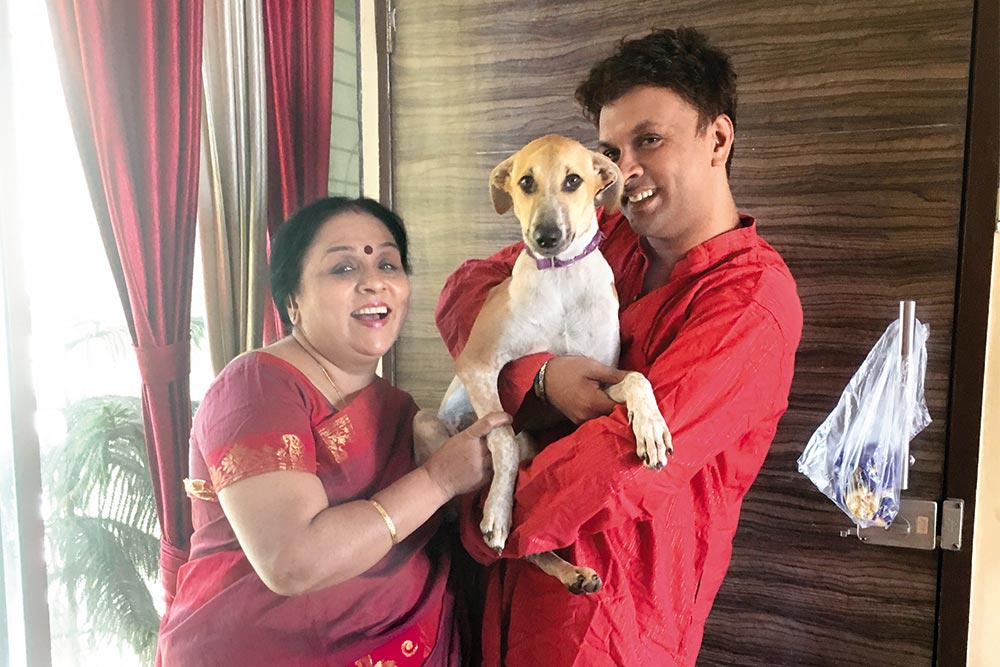 When his mother proposed placing a ­matrimonial ad for him, Harish Iyer agreed

The final advertisement read like this: Seeking 25-40, Well-placed, Animal-loving, Vegetarian GROOM for my son (36, 5’11”) who works with an NGO, Caste No Bar (though IYER preferred).

I thought that people would get the pun as they’d obviously understand that I, of all people, would not practise any sort of ‘discrimination’; and also understand that if I wanted an Iyer partner, I’d be less equivocal; and that, even if, it was my preference, I’d have had my own reasons. In this case, however, it wasn’t a particular preference, but simply done in jest. But sadly that wasn’t how people read it.

The advertisement was sensationalised in every wrong manner. It went feverishly viral, and every offline and online publication carried it. Many hailed my mother as progressive, but immediately followed it by “but…casteist”. I remember being tweeted by a friend in the news about the advertisement, and probed if it was written in good humour. I replied that if even it wasn’t, casteism was not at all intended in the ad. I suggested that when one was looking to place an advertisement, he would naturally keep in mind finding someone who spoke a similar language, ate similar food, had a similar culture, basically someone from a familiar background, and that being specific about partner preferences didn’t necessarily scream casteist. I thought, considering most people knew me as an activist who stood for minority rights, it would allow them to understand that I was just being funny.

However, I was wrong.

What followed, much to my annoyance, was a tsunami of hate-calls, e-mails and hate-comments on the internet. It was somehow okay to rebuke me sans seeking an explanation. Not to mention commentators ­reducing “all Brahmins” to “idiots”. I agree, Brahmins had been very ­discriminatory in the past, their beliefs being the epitome of patriarchy. But to reverse-discriminate and rebuke minus seeking explanation or analysing my line of work was never a solution to their problem.

As an afterthought of all the drama that unfolded in the wake of the advertisement, I retreated to ponder about the misconceptions that revolve around queers within the institution of marriage.

LGBTIQ members can be casteist

My matrimonial advertisement was an eye-opener. If you ask me if LGBTIQ people are casteist, I’d answer, some obviously are. LGBTIQ people are ­people, ultimately, anyone can be casteist! LGBTIQ members form a marginalised group. That is not to suggest marginalised groups aren’t capable of being prejudiced. LGBTIQ people form biases within and outside the community—biases against bisexual and transgender people, for instance, or against overly effeminate men or boyish women. I have been called Harish “Iyer” all my life. It is just a surname! It doesn’t assign a caste in particular, to me. And therefore, I don’t see the need to denounce it either, since it constitutes a part of my identity and not the caste it represents to people. In fact, I don’t think anyone should denounce their surnames to play to jingoistic tunes that promise more social media popularity. They should, instead, be non-discriminatory in their practices. Because I belonged to a marginalised community, didn’t I necessarily have to be sensitive towards all the struggles in the world. I had to be sensitive because it was the right thing to do. What this world needs is a broader perspective in viewing marginalised people. We are human too, and humans, err.

Gay rights in sex and marriage are not just about LGBTIQ, they are about women’s rights

Ronit was married to Anjali for over six years. They loved each other. Or so they thought, until Anjali discovered that the chemistry between them was fading. Soon, Anjali ­confronted Ronit with her doubts. He confessed that his “best friend”, Jayanth, was in fact, his lover. This broke her down. She tried reconciling, but eventually divorced him. Today, Ronit lives with Jayanth and Anjali envisages marrying again. Marriage is important in the Indian context. I may subscribe to it or not—it’s a personal choice. I may disregard it as a “social construct”, but the truth here remains that ­parents are deeply concerned about their children finding life partners and living what they see as a “complete life”, and, unfortunately, hetero­sexuality is the only way most parents are familiar with.

In my opinion, this paradigm may be gradually shifted, but can’t be completely removed so as to add shock value. Also, marriage, however flawed, remains the most accepted institution associated with procreation. Because of the impossibility of gay couples procreating, they are often reduced to “philandering bachelors”.

In cases of gay men getting married, we should not forget that the victim is the woman—the wife. It was not too long ago that Dr Priya Vedi from AIIMS killed herself, reportedly after learning about her husband’s sexuality. Priya’s case saw the light of day, but many others don’t. A lot of couples in India face issues similar to Priya and Anjali. There are also violent cases of gay men beating and even raping their wives. Nothing can be an excuse for this sexually ­violent and repressed behaviour. However, a lot of gay men resort to such practices to vent their frustrations of living dual lives. The victim, ironically, is thus to the largest degree the wife as well as her bisexual/gay husband. Here, the public has to be sensitised about the need to recognise gay relationships and acknowledge them.

Similarly, lesbians suffer double ­discrimination—one because of their gender and the other thanks to their sexuality. People find it unimaginable that a woman can love another woman, thus most go through a lifetime of non-consensual sexual intercourse and empty marriages.

One way of looking at these marriages is to keep blaming the patriarchal ­system (which indeed deserves serious reproof). However, I believe, Indian society, as a whole, needs to take the collective blame. Sexual and gender minorities are often victims of a larger socio-cultural-moral ecosystem and simultaneously they too must stand up and take responsibility—say no to their conservative families and not be pushed into marriages where there is no sexual or emotional connect. The families, conversely, also must share a large responsibility in educating ­themselves!

After my ad gained public attention, a lot of queer people asked, “when same-sex relationships are considered illegal,” how I could still post a matrimonial ad? Here’s the reason why: the hypocrisy of the law lies in that same-sex ‘relationships’ are not illegal, while the kinds of sexual intercourse that happen within such relationships are. The Indian law doesn’t recognise a gay, lesbian, bisexual, etc. person as a ­criminal; what it labels as crime is the nature of sexual intercourse such a person is disposed to. This is absurd because what takes place in the privacy of people’s bedrooms, so long as there is legit consent between two adult partners, should be beyond what the law dictates (needless to say, a minor is not capable of giving consent).

So, two people getting married while it is not to be sanctioned by the court and is thus not legally valid as a marriage, to put up a matrimonial ad or call the ceremony a “marriage”, will not invite a jail term or get one in some sort of legal trouble under Section 377.

Progressive as some sections of the society imagine themselves to be, the dark truth is that a great part of the country is still unaware and indifferent to the rights of the LGBTIQ community. What can be consequential, how­ever, in the long run is to educate ourselves and express ourselves freely. This will make it easier to push for the legality of same-sex intercourse and marital benefits under the law. 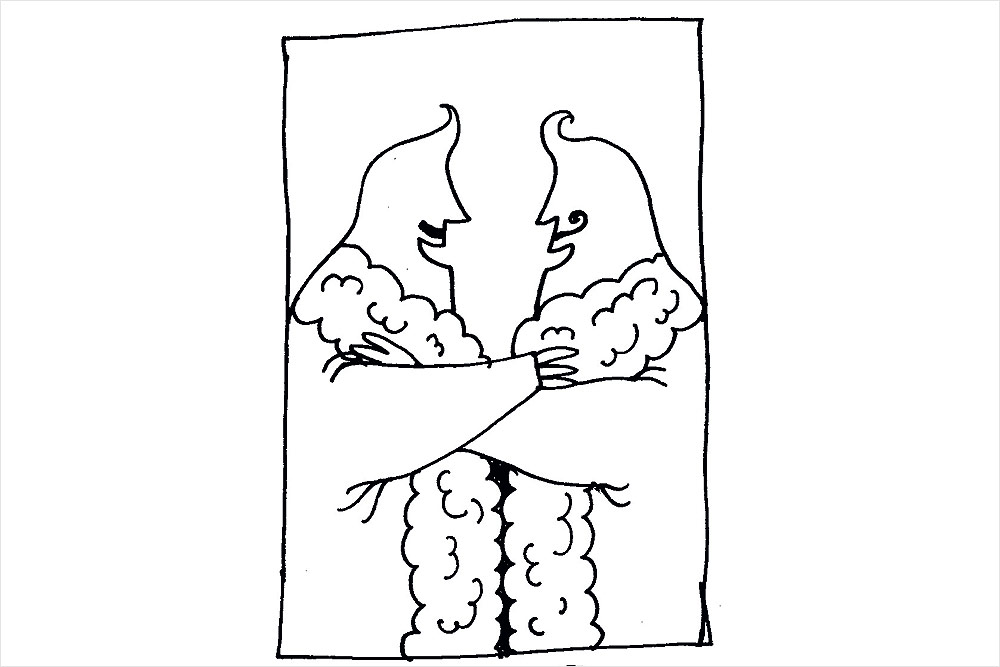 Bureau of No Secrets

The first marriage bureau for homosexuals was started this March by Benhur Samson, an NRI who owns the Chicago-based Surrogacy Abroad Inc, an LGBT-friendly one-stop agency for any intended parent. The idea to start a marriage bureau to help gay people came to Samson’s mind when he received requests from them regarding ­prospective life partners. Rajpipla’s gay prince Manvendrasingh Gohil was roped in as a consultant. The agency has also hired lawyers to look into the legal aspects of the marriages, including immigration if an Indian marries a person abroad. The bureau has received around 250 inquiries and around 24 people are enrolled with the bureau since it started operations. The agency also arranges counselling for those who sign up.

(Harish Iyer is an equal rights activist who campaigns for the LGBTIQ ­community, women, animals and ­survivors of child sexual abuse.)