Witness depositions left out, panchnama done after two months, the blaze investigations have been a mockery Updates 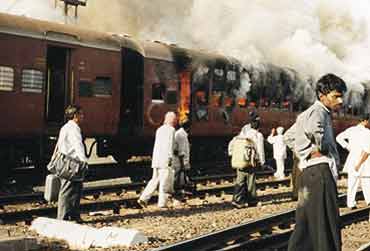 Witnesses may have missed something, the passengers could have got it wrong and the media may be biased. But one week after Outlook exposed the startling contradictions between the police chargesheet and the depositions of witnesses, the officer who investigated the fire inside the Sabarmati Express on Feb 27, 2002, has admitted before the Justice G.T. Nanavati Inquiry Commission that the chargesheets he and other officers filed were inaccurate. He also revealed he had no evidence to show there was a pre-meditated conspiracy to burn the ill-fated S-6 coach which left 59 passengers dead.

During his cross-examination, the then deputy superintendent of police (railways), K.C. Bawa, who handled the Godhra investigations, had no answers to some of the questions posed to him. He openly admitted there were lapses in the investigation and that basic procedures followed in every criminal investigation were bypassed in this case.

Here are some of the key admissions Bawa made before the Commission:

Bawa told the Commission he had learnt from the train's guard that the chain was first pulled at the Godhra station by passengers from four coaches because some kar sevaks were left behind on the platform when the train started. He said, "I have no idea why and from which coach the chain was pulled the second time near Cabin A, where the incident occurred." The officer said the fire occured following a scuffle between kar sevaks and tea vendors at the station. He admitted he had recorded Sophiya Sheikh's statement, with whom the kar sevaks misbehaved as she waited at the station with her mother and sister. It was this that sparked off the altercation between the vendors and kar sevaks. But for reasons unknown, he said he didn't include Sophiya's statement in the chargesheet.

Bawa's submission also brings out that no security was provided to the kar sevaks returning from Ayodhya; neither was the railway police informed about their return, unlike when they left for kar seva on February 22. "We had no information of their return. On the other hand, it is public knowledge that the kar sevaks left for Ayodhya from Ahmedabad on February 22 amid much fanfare and massive police security," he said.

Bawa's revelations not only destroy the claim in the Gujarat police chargesheets, including Bawa's, that there was a pre-meditated conspiracy to burn the train but also exposes the shoddy and casual manner in which the investigations were conducted into what was, and still is, a very sensitive case.