The Body Politic In Uniform 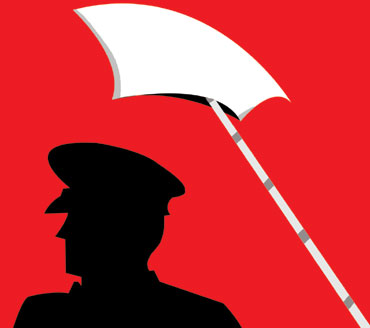 outlookindia.com
-0001-11-30T00:00:00+05:53
The terror attack in Malegaon has had an unexpected military consequence. A few military officers, at least one still in service, are under scrutiny for involvement. This is a revelation of, and a cause for serious concern about, the extent to which communal animosity has pervaded the nation’s polity. The subsequent discourse has, however, focused only on the politicisation of the army and the defence forces. What does the involvement of these officers in terror attacks—yet to be proved—portend for the armed forces’ stability and apolitical identity?

The links between terrorism, communal animosity and politicisation of the armed forces are tenuous. The forces have largely been free from demands to adapt their actions to political agendas—despite occasional pressure to selectively intensify or scale down operations in insurgency-hit areas when elections approach or negotiations are on. Military commanders have effectively resisted this, and the junior leadership is wholly free of partisan action. This neutrality makes the army a preferred choice of people in riot-hit areas. When the political leadership wants to keep communal riots going, it has often delayed the deployment of the army.

What could have motivated the officers allegedly involved in the Malegaon attack? Surely, it was not patriotism. Was it then an ultra-nationalism of a narrow kind, influenced by the identity politics being practised in the country? And if a religion-based divide got the better of the officers’ professional judgement, is the malady widely prevalent in the army? The answers need to be found in empirical evidence.

The armed forces function through rational action determined by military necessity, not political ideology or communal sentiment. This notwithstanding, arguments about the politicisation of the military have been frequently put forth in all democracies. When Gen David Petraeus testified before the US Congress to justify the troops surge in Iraq, there were accusations that the George W. Bush administration was politicising the military.

In India, the extensive use of the army in internal security duties is thought to expose it to the risk of politicisation. Promotions and postings, too, have not been free of such insinuations. After the Golden Temple operations, there was anger and hurt amongst Sikh troops and officers. Some had mutinied, some deserted and there was at least one senior retired officer who had lived with Jarnail Singh Bhindranwale in the holy shrine. But the armed forces were not politicised by that serious breakdown of discipline. Neither has the use of the army to halt communal riots resulted in its communalisation or politicisation. The conclusion being drawn by some that the Malegaon episode is proof of the armed forces’ politicisation misses the important challenges faced by the Indian state.

The political leadership has largely been unable to envisage a genuinely inclusive democratic process delinked from identity politics. Armed forces personnel are witness to this, as much as anyone else. The effects of virulent identity-based political rhetoric are to a large measure counterbalanced by the model of secular identity preserved in the armed forces. This sustains the faith of armed forces personnel in the ideals of the Indian state. But it cannot wholly immunise every individual against the ill winds in the polity.

Officers who were unable to rise above that communal and vengeful rhetoric allowed themselves to be involved in Malegaon. It will not be surprising if one learns that such retired officers were in fact targeted as potential facilitators by interested groups. The Bhonsala Military School in Nashik, where meetings and the training for terrorist acts allegedly took place, is not under the military. It is one of many civilian institutions propagating a narrow form of nationalism. If some retired officers join such an effort, it’s a case of individual failure of loyalty to the state they swore to defend.

These unfortunate exceptions do not prove politicisation of the army, but their import cannot be minimised. Relentless communalising of politics and politicisation of governance is causing serious damage. It is beginning to affect the values by means of which the citizens adhere to the state. The armed forces, instruments of state power, are clearly at risk of being affected by the growing mismatch between the ideals they adhere to and the practice they witness.