The Blue Part Of The Flame 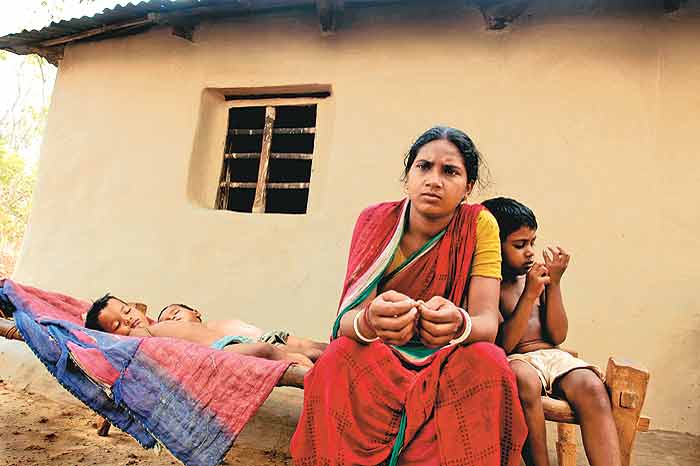 In these times of Operation Green Hunt, inhabitants of Maoist-affected areas like Lalgarh run the risk of being branded Maoists wholesale. Police brutality is but a natural corollary. They can be stopped and searched. The axes, bows and arrows these people have traditionally carried for hunting and protection while going into the jungle to gather petty forest produce can be deemed weapons by policemen seeking an excuse to book them. They can be arrested, locked up and tortured on the merest suspicion.

“It would be easier if the Maoists had horns on their heads. Unfortunately, they don’t. So we have to search everyone if we suspect anything,” says a police officer in Lalgarh, trying to explain the difficulty of working in such areas. Suspicion can lead to arbitrary arrests. Villagers are so terrified of  the police that when there’s a blast in their area, they run to the forests almost as a reflex. In December 2009, after a police vehicle was blown up by Maoists in Pirakata, Sunil Mahato, whose house was metres away from the site, fled to the jungle. Police took this to mean he was absconding, and therefore, a prime suspect. Mahato’s Catch-22 situation, like that of many like him: he ran away precisely to avoid being beaten up as a suspect. Those caught in the crossfire between the police and Maoists have no control over the actions of either, but are victims of both. The magnitude of the horror they face can be understood only if one zeroes in on individual stories.

“Can you help us? We have no one to turn to,” Mahato asks from his cell in West Midnapore jail. He came out of the forests on hearing that his wife Dipali had been picked up by the police in connection with the blast case. “When I heard they got my wife, I rushed back to my empty house. Even my children had been taken to jail. I just lay down on the khatia outside by door and waited for the police,” he says. The Salboni police station slapped seven cases against him, including conspiracy against the state and possession of arms and ammunition and explosives. “But I’m not a Maoist,” he says, breaking down.

“Am I mad to go and become a Maoist — with these four children of mine?” asks Dipali

Outlook met Mahato’s wife Dipali in her mud hut at the edge of the Pirakata jungle, just two kilometres from the busy market area of Pirakata, on the way to Lalgarh. She says naming her in the fir with her husband and arresting her was only a means to getting him. She was hauled to court and when the judge remanded her in judicial custody, she had to take her four children with her to jail, the eldest eight years old, the youngest just about a year. Later, the children were kept in a home. Released after her husband’s arrest, she swears she has no Maoist links. “Am I crazy to become a Maoist—with these four young children of mine?” she asks.

In the same village lives Namita, whose husband Sachin Mahato is in jail for being a Maoist. She chokes as she narrates how the police picked him up. “My husband is sickly and we always treat him delicately,” she says. “But they grabbed him by the hair and shook him. I was pleading with them to stop. But they dragged him away. Our only crime is that we live by the forest.” And Sachin says he was hung upside down and beaten till he said he was a Maoist. “They kept asking me if I knew Kishenji,” he says. “I can’t help it if some of the people who come to my tea shop are Maoists. Don’t the police know that if I refuse to serve them, the Maoists will finish me off for being a police stooge.”

The reality in such areas is that ordinary people are being brutalised by both sides. Soon after Sunil Mahato’s arrest, his cousin Vinod was picked up by the Maoists and shot dead in the forests. “I don’t know what happened,” says Sunil. “Maybe the Maoists approached him and he refused to join them, fearing police retaliation.”

As far as state action is concerned, not one of the cases against suspects like Sunil have resulted in conviction. And to get an idea of how many “suspects” are in custody, consider this: there are 141 men and women held for being Maoists in West Midnapore jail alone.

The police look at it in another way, perhaps with a logic consistent with the fact that they have a job to get done. “There are many categories of Maoists,” says an officer at Lalgarh police station. “While it’s very difficult to catch the actual squad members, who don’t come out of their forests except in the night, it’s the villagers on the periphery providing them food, water and shelter who are getting caught.”

Examples abound. Take Paro Singh. Her Maoist link is so indirect, it makes little sense that she is serving a jail sentence. She’s from a poor tribal family of Belpahari area. After marriage, she came to live in her husband’s home—here, people would drop in at night and her husband would hold discussions with them. She never asked questions, only served them food and water. She never understood the implications. Inevitably, their house became a target for police searches. Her husband would  go away to hide in the forest whenever that happened. And then one night he disappeared for good. The police would keep demanding to know his whereabouts from Paro, but she had no clue.

One night, policemen hit her on the leg when she tried to run. She fell unconscious. All she remembers of that incident—from the periods she came to—is her daughter screaming and blood gushing out. After being in the jail hospital for a few months, she’s now in the  prisoners’ area. When I spoke to her, her leg was still in plaster. There is no dearth of such stories in Lalgarh, particularly in villages on the edge of the forests.