The Black Will To Power

Not many liked this US envoy, but who can deny that he had a spot for India 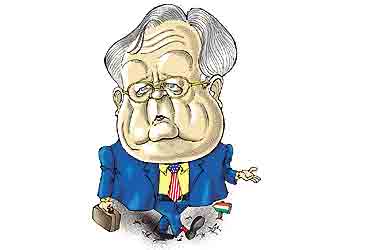 illustration by Sandeep Adhwaryu
Seema Sirohi, V. Sudarshan May 05, 2003 00:00 IST The Black Will To Power

outlookindia.com
-0001-11-30T00:00:00+0553
When the US ambassador to India, Robert D. Blackwill, and Union minister for external affairs Yashwant Sinha met in January this year, few thought the meeting had the potential of generating shockwaves all the way to Washington. Blackwill thought otherwise. In a cable to the headquarters, he said Sinha—and consequently India—was convinced it had missed an opportunity to attack Pakistan post-Parliament attack, December 13, 2001, and that were a terrorist incident of such magnitude to occur again, it would be difficult to stop India from responding militarily.

For the Bush administration engrossed in orchestrating the Iraq invasion, Blackwill's cable was alarming. An Indo-Pak sideshow was just the kind of distraction it didn't want. So, when foreign secretary Kanwal Sibal visited Washington in early February, deputy secretary of state Richard Armitage and assistant secretary of state Christina Rocca together cited Blackwill's cable to express their anxiety. A surprised Sibal said the text of the cable wasn't precisely what Sinha had said.

Last week, as Blackwill announced his decision to return to the US and pursue academics at the prestigious Harvard University, some cited his January cable to claim that his "misleading account" persuaded the state department to show him the door. (Obviously, done politely by asking him to leave on his own.) Too ambitious and extremely keen to remain in the spotlight, it was alleged his exaggerated account was a ruse to ensure that he wasn't forgotten amidst the hype over Iraq.

Diplomatic sources, however, dismiss the cable controversy as having been the cause of his departure, claiming such disagreements between the headquarters and its missions are not uncommon. They say 10 out of about 20 US ambassadors who have served in India left at the end of two years. In other words, Blackwill's tenure is pretty much par for the course.

Yet, career diplomats are known to seethe at Blackwill's imperious ways. "No one can stand his know-it-all attitude," says a former US administration official. Secretary of state Colin Powell reportedly even questioned the ambassador on his abrasive manners. Subsequently, inspector general Clark Ervin found truth of this in a slew of complaints US embassy officials in Delhi lodged with him last year, as also in the rock-bottom morale among them. Stung, Blackwill wrote a 26-page rebuttal and was rumoured to have put in his papers.

"His resignation would have been accepted earlier if not for Condoleezza Rice," said a source. Rice, a fellow "Vulcan"—the name foreign policy advisors to then presidential candidate George Bush gave themselves—was Blackwill's junior in the National Security Council of Bush Senior. And it is because of Rice that Blackwill enjoyed favours normally not extended. For instance, Blackwill was sworn in at the White House, not at the regular Ben Franklin room of the state department. And every time he came down to Washington, he was invited to the Oval Office, a privilege only a few ambassadors enjoy.

His stature was his problem. Considered close to Bush, and a prominent member of his policy team during the election campaign, Blackwill had perhaps hoped for a high-profile assignment in Washington. Among the options he had left was an ambassadorship to NATO. Blackwill preferred India, believing he could inject substance into the Indo-US relations.

He came to Delhi bursting with energy and ideas and a rare evangelical fervour. Among the first things he did in Delhi was to order a round table that could sit 16 and fit into the dining hall of the Roosevelt House, his official residence. Here he held court, sometimes three times a week, inviting senior bureaucrats and politicians to discuss the pressing issues of the day.But it was around this table that he ironically alienated many, through his hectoring style, often coming across as a person who mistook his guests for students in a Harvard classroom. Graceless as a hammer, Blackwill's condescending manner is now stuff of urban legend in Delhi, his small-town-boy insecurities against the more urbane East Coast establishment too transparent. Freud may redefine the EGO as it exists in Blackwill.

No wonder Blackwill has few institutional supporters. He showed little courtesy to Rocca who technically outranks him but is in reality many years junior to him. He reportedly often went over her head, pronouncing policy positions on Pakistan that created diplomatic minefields for the department. "He made too many statements, which were not his to make, putting her in an awkward position vis-a-vis the Indians," says a well informed source.

Yet, this was only an aspect of the man. He used his Washington connections to advantage, plugging in the Indian establishment to DC in a manner never seen before. Diplomatic sources say in his departure the big loser is India whose cause he mastered, articulated and dinned into a White House grappling with a post-9/11 world. Many in Washington accused him of suffering from "localitis", suggesting he often acted like India's ambassador to the US rather than the other way around. Indeed, he didn't allow India to fall off the agenda and assiduously reminded top US policymakers of the need to push the relationship forward. Among his major accomplishments was pushing for easing curbs on high-tech trade to India, increasing both the quality and quantity of senior US visitors, enhancing the military relationship and organising an Indo-US strategy group at the respected Aspen Institute where the likes of Henry Kissinger ruminate about the world.

But it was on Kashmir that Blackwill showed how different he could be from others who inhabited the Roosevelt House. He did not give the Hurriyat the political attention they craved for, refusing to meet them on his two visits to Kashmir. He cancelled his only scheduled meeting with them the minute they established an 'election commission' to monitor the poll in the state. Sources in Srinagar say Blackwill even interrupted a briefing at the 15 Corps Headquarters when the word 'militants' was used, declaring, "There is no such thing as militants. They are plain and simple terrorists."

His weak point was economics, demonstrating interest in it only through his grandiloquent speeches. He failed to push US exports to India, even though Indian exports to the US registered a 20 per cent rise. And he compounded this by repeating that Indo-US trade is "flat as a chapati", to the chagrin of Indian businessmen.

Ultimately, Blackwill chose to bow out at the time his tenure in India was reaching the point of diminishing returns. The increasing assertiveness of the South Asia bureau left its indelible imprint on several issues: the American demarche that told New Delhi to back off on Afghanistan was done mainly to humour Pakistan; the non-proliferation lobby sought to put brakes on the Trinity issues (civilian nuclear, high-tech transfers, space) on which the transformed relationship between India and the US is not reflected; the state department's recent tendency to de-emphasise the need for Pakistan to fulfil its commitment on cross-border terrorism; and the increased emphasis on dialogue. Indeed, top officials visiting India have admitted that the bureaucracy is the obstruction in realising Bush's goal of fundamentally transforming relations with India. Even Armitage alluded to this at a cii function last August.

More than anything else, in another few months, the US administration will be in election mode, as will be India.With the US preoccupied by West Asia and North Korea, Blackwill probably concluded that further achievements would prove elusive. Perhaps he thought it would be better to join the presidential campaign early on to play for bigger stakes.

V. Sudarshan In New Delhi And Seema Sirohi In Washington