'The BJP Is Not Distancing Itself From The Mahajan Family'

Former Maharashtra deputy CM and Pramod Mahajan's brother-in-law has moved out of 7 Safdarjang Road into Delhi's Hyatt Regency hotel, from where he has begun the tough battle to save his nephew. 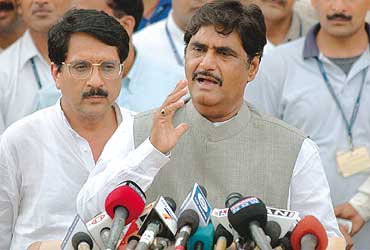 What is Rahul's version of events?
Rahul says he was drinking wine that night. He left the room several times because he got a personal call, and to go to the toilet. When he returned after one such trip and drank, he fainted and passed out. He also did not know the boys who came to the house. They were known to Vivek. Rahul had never lived in Delhi. This was one of his longest trips. He came for the BJP national executive and stayed on to leave for Guwahati where he planned to immerse his father's ashes. I was staying there with him till I returned to Mumbai after the executive. But Vivek had a permanent room in that bungalow.

Did you know Vivek did drugs?
I can't believe he was an addict. But you can't know every personal detail about someone. All I can say is, don't compare Rahul with Vivek.