The mall does not make us modern. The middle-class covets the 'big box' as it insulates them. 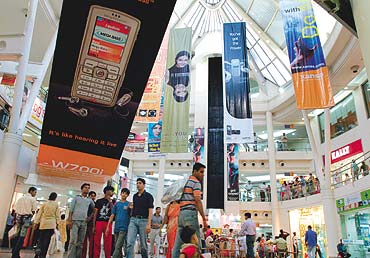 outlookindia.com
-0001-11-30T00:00:00+0553
India's first so-called 4D theatre opened to much excitement earlier this year in Atria Mall in Mumbai's Worli neighbourhood. Filmstars, fitness trainers, famous photographers and models trooped in to experience the thrill of movies that promised to leave the audience both stirred and shaken. Wearing special red spectacles and perched in seats that bucked and jolted, they paid Rs 75-200 to watch films that exploded out of the silver screen. "If there's foam on screen, you feel foam all around you," the owner told one reporter. He told another: "The audience will be able to feel the wind, water sprays...see lightning and smell various smells." So if a character in the film takes, say a sip of coffee, the audience will be able to savour its aroma. Or if the film is set in a haunted house, the auditorium'd probably be flooded with a dank stench.

If you think it's a little excessive, you aren't alone. The audience at the theatre would probably agree with you. Atria, as anyone who's visited it well knows, has been built next to one of Mumbai's main sewage canals and most of the mall's clients would be horrified at the thought of having to pay good money to have the stink follow them off the street and through the glass doors. (That isn't the only uncomfortable sensation to greet the nostrils. A petition filed by Medha Patkar, now pending final hearing in the Bombay High Court, alleges that the mall has been constructed on land reserved for a municipal school and to provide shelter to dishoused people.)

But the odour hasn't kept the crowds away. The mall now has a sushi restaurant, an Apple computers outlet, a high-end lingerie store and India's first Rolls Royce showroom, perhaps the only dealership in the world to sell the Spirit of Ecstasy on the banks of a waste-disposal canal. This, if retail consultants are to be believed, is the way of the future. An article in a sister publication of Outlook earlier this month estimated the number of malls in India to jump to 600 in 2010, from 158 last year. It quoted a study by a firm, Images Group Retail, which suggested that the value of the organised retail sector will grow 2.8 times to Rs 1,000 billion in four years, from Rs 380 billion at present.

The encroachment of malls across the country has been cheered on vociferously. Middle-class Indians have been persuaded to partake of the 4D illusion that the proliferation of malls is proud proof that India is finally taking its place among the community of consumerist nations and that, by shopping in glass boxes, we're just as developed as the US and Europe. To be sure, not all these hundreds of new malls will spring up by the sides of sewage channels, but the majority of them, it's fair to say, will be located just as inappropriately. The mall, after all, is an energy-guzzling creature of the Western suburbs, set amidst acres of parking space. To build gigantic malls —places to which suburban Americans drive to do their shopping for the entire week (and sometimes longer)—in the midst of cities, like we're doing, is only exacerbating our already-burdened urban infrastructure.

It's a problem residents of western cities like New York have long recognised and continue to argue about. While Indian cities are laying out the red carpet for malls, citizens' groups in NY have tenaciously opposed the construction of what in the US are known as "big box stores". In addition to infrastructural concerns, US citizens groups have also recognised that malls cripple the small entrepreneurs essential to any vibrant urban economy. For instance, a New York blog titled 'Big Cities, Big Boxes' lists the following among the reasons for opposing plans to build a branch of a giant Ikea store in Brooklyn's Red Hook neighbourhood: it "will force local shopkeepers out of business, deaden local shopping streets, and destroy more jobs in local retail stores and distributorships than it creates". If the US example is anything to go by (and why shouldn't it, considering it's the model we've adopted), malls subdue the diversity of the bazaar, where both buyer and seller have open access. 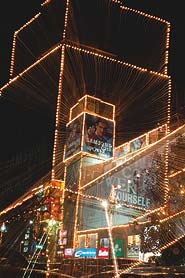 But that's precisely the source of the mall's appeal to most Indians. We flock to these self-contained, climate-controlled bubbles because they shut out the poverty-stricken people that we'd otherwise encounter in the bazaar. This eagerness to clamp on blinkers and to wilfully exclude the bulk of our fellow citizens has disquieting implications for a participatory political system. We've allowed ourselves to believe the facile contention that shopping is the ultimate form of democracy, failing to recognise that a democracy allows us through the door simply because we exist, not because we buy our way in.

That's long been the subject of debate in the country that created the modern mall, the US. As a whole swathe of commercial activities gets concentrated in private spaces, Americans have realised that their ability to perform other functions traditionally conducted in public has also been severely limited. For instance, as criticism rages against Bush's war on Iraq, US mall operators have routinely refused to allow protesters to engage with fellow citizens inside what Americans recognise are their new Main Streets. The New York Civil Liberties Union has come out strongly in support of an act to amend the civil rights law in relation to freedom of speech in certain shopping centres. It said in a statement, "Free and open expression is the touchstone of a non-totalitarian, democratic society. This vital legacy should not be abandoned merely because the populace has gone to the mall."

The near-absence of discussion in India about what it means to shop in malls is just another indication of how we're being sold false notions of how they do things in the so-called developed world. But as the moviegoers at the Worli mall well know, 4D illusions, no matter how well they're constructed, are merely transitory.