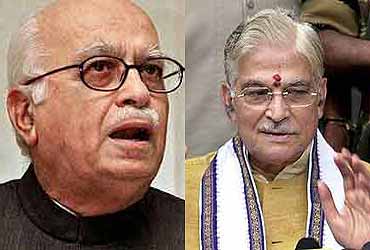 outlookindia.com
-0001-11-30T00:00:00+05:53
Lal Krishna Advani reportedly heaved a sigh of relief. His supporters distributed sweets and exchanged congratulatory SMS messages. The man who had led the Ramjanmabhoomi movement, which culminated in one of the most spectacular acts of vandalism in contemporary Indian history, was let off the legal hook by Rae Bareli special court judge V.K. Singh.

But it was a pyrrhic victory. Eleven years after the demolition of the Babri Masjid, after several legal twists and turns, the judge ordered the framing of criminal charges—which included sections like inciting violence, spreading enmity between communities and unlawful assembly—against a galaxy of leaders from the BJP and the VHP. Among them were Union human resource development minister Dr Murli Manohar Joshi and the party’s Madhya Pradesh chief ministerial candidate Uma Bharati. The VHP leaders in the legal loop are Ashok Singhal, Acharya Giriraj Kishore, Vishnu Hari Dalmiya and Sadhvi Rithambara.

Joshi tendered in his resignation less than an hour after the ruling was announced though Union law minister Arun Jaitley had announced much in advance that "there is no need for anyone to resign, as Ayodhya is a political movement". Yet there is no doubt that criminal charges have serious consequences for Joshi and Uma Bharati. Joshi had already committed himself to resigning if charges were framed against him. And though BJP president Venkaiah Naidu says Uma Bharati will continue to be the party’s chief ministerial candidate in Madhya Pradesh where assembly polls are due in November-end, the criminal charges could prove to be a serious impediment to her plans. Says Congressman-lawyer Kapil Sibal, "A criminal charge is a criminal charge. How can she hope to be CM if she faces criminal prosecution? Remember that Laloo Yadav and Jayalalitha both had to resign when they faced criminal charges."

But a bigger crisis confronts the party and the larger Sangh parivar over the issue of how Advani alone got off the hook. Leaders like Joshi and Ashok Singhal will not go down without a fight. As it is, Advani’s personal relations with Joshi and the VHP leadership are strained. It is inevitable that questions will be asked about whether a deal was struck with the cbi only to get the DPM off.

Besides, many legal experts describe the court proceedings as a complete eyewash. Says Sibal, "Advani will have to examine his conscience and ask whether it is fair that those who followed him should be charged while he should get off scot-free." Already, many of the kar sevaks who participated in the mosque demolition have been speaking out against the leadership, saying they were incited by the BJP and VHP netas.

In fact, serious questions arise about Advani’s moral position after the court order. How can the man who led the Ramjanmabhoomi movement be let off, and those who followed him be held culpable? Are different legal standards being applied to the DPM? And more pertinently, can Advani live with himself after this brazen twisting of legal standards?

Even the lawyers assembled at the Rae Bareli court were stunned at the double standards of the court order. And the BJP too appeared to be somewhat taken aback. Party leaders were not clear about whether to describe the court order as a "partial victory" or a "partial failure".

In any event, the issue is unlikely to die down quickly. It could well consume the BJP in the coming weeks and vitiate inner party relations. And though Advani won’t have to face the immediate ignominy of criminal charges, petitions relating to the Ayodhya cases are still being heard by the Supreme Court. Sibal, who has been involved in some of the cases, says: "Advani’s legal battle is certainly not over yet."

Moreover, if the UP government led by Mulayam Yadav wishes to pick a fight with the BJP leadership, there is every chance the criminal conspiracy charges against Advani could be revived. Though unclear about the legal strategy to be adopted by the Mulayam government, his deputy Amar Singh told Outlook: "We’d have been happier if all those involved had been charged. But we are happy that the BJP and Sangh parivar are being held accountable for communalising the political situation."

Many of Advani’s loyalists had speculated that were he compelled to resign in the face of criminal charges, it may well have been the end of the road for the DPM. The party, however, was trying to put a brave face on it saying that Advani could return to organisational work and "revive" the Ram temple movement. It’s now clear that Advani will not have to resort to clambering on to a rath again, even if his culpability in the Babri demolition will be forever in question.

As it is, the VHP’s plans to "revive" the Ayodhya movement next month will keep the entire issue in the limelight. And with senior BJP leaders like Joshi being forced to resign, the entire issue could have far-reaching reverberations. While announcing his resignation, Joshi said with a touch of sarcasm: "I congratulate Advani for getting off."

Meanwhile, the party will have to wait for Vajpayee’s return on September 28 to finalise its Ayodhya strategy. Though the party has been saying that there is no need for anyone to resign, the PM will in all probability accept Joshi’s resignation. "Having a chargesheeted minister continue in office could lead to the stalling of Parliament," says a functionary.

Be that as it may, the prime minister will have to seriously ponder over whether his respectable face is adequate cover for the commissions and omissions of his party colleagues. All these legal problems undoubtedly create a credibility problem for the BJP in an election year.

The law, in fact, appeared to be catching up with another BJP luminary last week. The Supreme Court’s scathing remark on September 12 that the Narendra Modi government in Gujarat quit if it can’t punish the guilty and give justice to the riot victims was also a major loss of face for a party that hankers for respectability. Chief Justice V.N. Khare said: "I have no faith left in the Gujarat government. You have to protect people and punish the guilty. What else is raj dharma?"

Rattled, the Gujarat government had no choice but to assure the court that "it would amend the grounds of appeal and reinvestigate the Best Bakery case. Gujarat chief secretary P.K. Lahiri and DGP K. Chakravorty were summoned by the apex court on September 19. Chakravorty admitted that the police commissioner of Baroda—where the Best Bakery incident took place—had told him that he feared the witnesses were turning hostile because they were coerced or won over.

Though in Modi’s case too, Naidu says there is no need for him to resign, the Gujarat cases too are becoming an embarrassment for Vajpayee. In fact, the day after the Supreme Court observation, Vajpayee declared from a public forum: "There is no need to be sceptical about Indian secularism. In spite of unfortunate aberrations, whose recurrence must be prevented, India will always remain an open, inclusive and tolerant nation." Sources reveal that the remark about "unfortunate aberrations" was added to the PM’s speech after the Supreme Court remarks. But beyond applying the balm of soothing words, there’s little the PM can do to haul up Modi—-even presuming that he may want to. The BJP high command did, however, send a signal to the Gujarat CM that there is no point in attacking the court. Says a senior government functionary: "He has been advised that this is a no-win situation. It will be counter-productive to take on the judiciary."

Still, with the Supreme Court indicating that the Modi government’s handling of riot cases will remain under its scrutiny, BJP leaders are worried about when the next indictment or embarrassment could come. Supreme Court advocate Prashant Bhushan, who assisted in filing the National Human Rights Commission petition, describes the court’s observations as "a morale-booster for those who are fighting for what appears to be a hopeless cause. It keeps hope alive". Yet he warns that there is a long way to go before the case is decided.

Still, embarrassing Modi is an achievement in itself. For, there are some crimes that cast long shadows. Advani, for instance, has spent the last decade trying to live down his image as the Ram rath charioteer. He has tried to recast himself as the "good governance" man, the new-age Sardar Patel and Venkaiah Naidu’s "lohpurush". Ever since the BJP came to power he has not uttered a single inflammatory or indiscreet word about Ayodhya or the Ram temple movement. Now the chances of him going scot-free have become distinctly brighter. But while Advani may free himself of the legal loop, the Babri demolition will continue to haunt him like Banquo’s ghost.

By Saba Naqvi Bhaumik and Sutapa Mukerjee in Rae Bareli, UP with Anupreeta Das