PM Modi is off to an encouraging start. Will the momentum last? 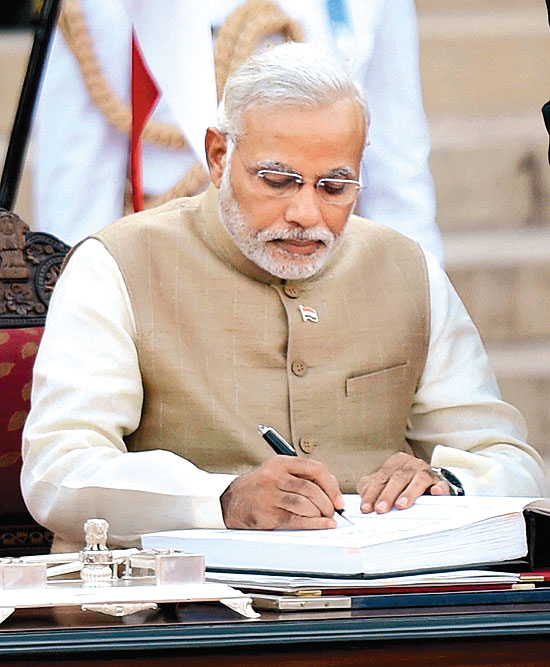 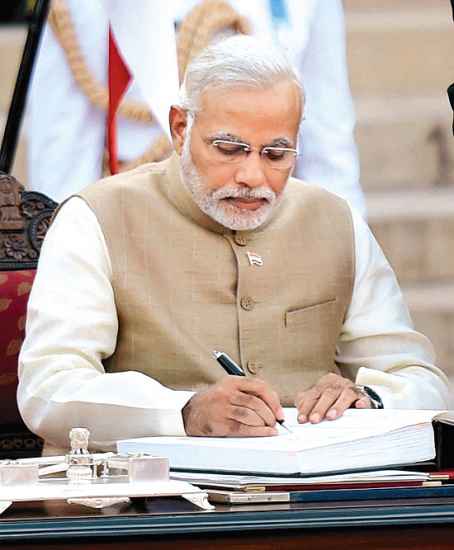 Plato must be pleased. The new prime minister seems to have taken the Greek philosopher’s advice. “The beginning,” said Plato, “is the most important part of the work.” And what a beginning it has been for Narendra Modi. He has hardly put a foot wrong in the past two weeks. He has displayed a sureness of touch, a firm resolve and an inclination to take tough decisions. He has lived up to his campaign promise of “small is beautiful”.

The minimalist approach is conspicuous in cabinet formation. In the process, the prime minister has had to ruffle some feathers, but the unhappy task was executed with grace. Meanwhile, the boldness with which he overcame hurdles to appoint his principal secretary should worry his adversaries. What Mr Modi wants, Mr Modi gets. This is the message he is sending out.

Cabinet formation is a messy business. Resignations, tantrums, threats are a commonplace. Therefore, consider the way L.K. Advani and M.M. Joshi have been marginalised. There has been not one word of protest from the two heavyweights. They will probably walk quietly into the sunset.

The boldness with which he overcame hurdles to appoint his principal secretary should worry his adversaries. What Mr Modi wants, Mr Modi gets.

Another reason for applauding the construction of the council of ministers is the Modi stamp it carries. Most in the list are Modi’s handpicked chelas, and while they can expect some autonomy, they all report to the Big Boss. The buck stops with him. His willingness, indeed eagerness, to take responsibility for their performance/non-performance makes a change from the previous government where the left hand did not know what the right hand was doing. This prime minister wants to be accountable.

Now the PM’s masterstroke. His decision to invite SAARC leaders, including Nawaz Sharif, intrinsically transformed the complexion of the swearing-in ceremony. Even if one accepts that the Pakistan prime minister’s presence in Delhi was nothing but inspired atmospherics, Mr Modi has softened his image as a Pakistan-baiter and critic of biriyani diplomacy. The effusiveness with which Mr Modi greeted his Pakistani counterpart—the extended handshake said it all—has set the stage for more substantive parleys between the estranged neighbours.

Praise is also due for Nawaz Sharif. He took a huge risk by accepting the invitation defying the army/ISI, Hafiz Saeed, refusing to meet the Hurriyat, playing down the Kashmir issue and concentrating on trade and economic ties. Mr Sharif’s behaviour in Delhi was impeccable. On his return home, he did not change his tune, reiterating the criticality of better India-Pakistan relations, and his determination to pursue them.

Given my reputation as a pseudo-secularist, I must point to one black spot. The prime minister has rewarded one of the MPs named in last September’s  Muzaffar­nagar riots, an MP who spent time in jail. Sanjeev Baliyan is minister of state for agriculture. His presence in the list of ministers is unfortunate.

Of course, the prime minister has a long way to go and he has a full in-tray. Moreover, expectations are sky-high, with the usual coalition difficulty alibi no longer available. Thus, I am mystified how the PM has allowed the Article 370 debate to erupt. It is a fatuous debate, incapable of resolution in the prevailing environment. Mr Modi and the BJP, one thought, had abandoned such issues. The prime minister must put out this fire quickly and ensure non-issues remain non-issues.

Those who did not vote for Prime Minister Modi should avoid judging the new occupant of 7, Race Course Road, by his past. They should judge him by the way he governs India in the present. I am delighted the first signs are promising.