BJP signals are for early general polls, in 2004 spring. The EC may cut that down Updates 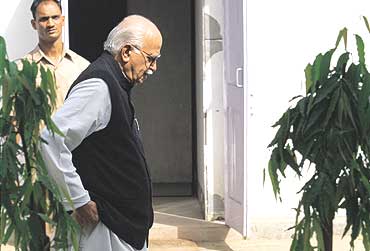 Asign of its own nervousness? Or is the BJP merely trying to confuse the Opposition with talk of early general elections? Since the idea's been floated by no less a figure than deputy prime minister L.K. Advani, the political class, for one, is taking it quite seriously. Yet, the picture remains unclear, partly because of the tricky questions of law, partly because Prime Minister A.B. Vajpayee has kept an enigmatic silence on the issue.

As the BJP's main political strategist, Advani undoubtedly had electoral calculations in mind when he suggested last week that the "Lok Sabha and assembly polls should be synchronised". The dpm also told journalists that Union law minister Arun Jaitley was looking into the legality and constitutional feasibility of the proposal. As if on cue, BJP president Venkaiah Naidu told party workers—suggestively enough—that they should be ready for elections "anytime now".

Advani's MoS at the home ministry, I.D. Swami, insists "the dpm is only speaking of a principle". Indeed, there are far too many constitutional bottlenecks in the way of the central government extending the terms of the four key Congress-ruled assemblies where polls are due November-end. Which is why BJP strategists say Advani was actually floating the idea of preponing the Lok Sabha polls, due in October 2004, to November this year along with the assembly elections.

The political case for early general elections goes something like this. The BJP believes it has a strong national leadership and a vote-catching leader in Vajpayee but the leaders in the states are not up to scratch. The Congress, conversely, has strong chief ministers but Sonia Gandhi remains the weak link. Hence the view among a section of the BJP that the impression of strength it would carry in a Lok Sabha poll would radiate outwards if the assembly polls were hitched on. That the...