The Ballad Of Truce

This time, the PWG's offer of talks seems 'quite reasonable' 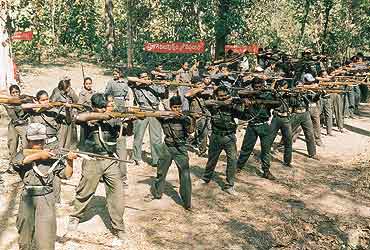 outlookindia.com
-0001-11-30T00:00:00+0553
After three decades of bloodletting which has left thousands dead, there's finally a glimmer of hope for a peaceful resolution of Andhra Pradesh's Naxalite problem. The powerful People's War Group (PWG) says it's willing to lay down arms and talk to the government. Chief minister N. Chandrababu Naidu has responded in kind, calling for an all-party meeting to evolve a political consensus on how to go ahead with the proposed peace talks.

The government, understandably, has been wary of spelling out its strategy before the meeting, scheduled for soon after February 10, when Naidu arrives back from his ongoing foreign tour. There's every indication that the government will reciprocate positively to the PWG's demand for holding off all police action to create an atmosphere conducive for talks. On its part, the PWG has already offered a three-month ceasefire, starting from the middle of February.

The peace moves come in the wake of much pressure on both sides to find a peaceful solution to one of the state's most intractable problems. "The gun is not our sole weapon. A revolutionary party draws its support from the people. So we have to listen to their wishes," says renowned poet-cum-balladeer Gadar—who's also the PWG's best-known voice—trying to explain the group's sudden turnaround.

This is not the first time there's been a move to initiate dialogue between the rebels and the government. The first attempt came in May 1999 and then in April 2000 and once last year. However, they all fell through even before talks started with both sides bogged down by the stiff preconditions set. This time around, the PWG has been a bit more conciliatory, even at this preliminary stage. Even home minister T. Devendra Goud concedes that their demands so far have been "quite reasonable".

A section of the police brass is more sceptical though. They fear the rebels are only trying to buy time to consolidate. However, such warnings are being swept aside by the overwhelming political and economic compulsions on the government to try and find a solution to the problem. With elections due next year, local politicians cutting across party lines are keen to spend more time in their constituencies. At the moment, it's not a very judicious thing to do, given the number of local- and district-level leaders killed by the PWG.

On the economic front too, investor confidence has been shaky following a rash of attacks on some high-profile businesses late last year. First, a Coca Cola bottling plant was blown up followed by attacks on a Tata unit. Two businesses where Naidu's family and Union MoS for defence U.V. Krishnam Raju had interests were also targeted. More than the damages, it exposed the state's vulnerability to such attacks.

The rebels haven't spelt out their demands yet but one can expect redistribution of land to be a top priority. The administration is already examining several possibilities in this regard including repurchasing, reassessing and redistribution of surplus lands. Back in '71, Andhra was one of the initial set of states to legislate land reforms but there's been little evidence since of any significant change on the ground. "I agree that none of these reforms have been implemented in their true spirit," Goud admits.

Meanwhile, Naidu has also hinted that irrespective of the state's resource crunch, he's willing to go the extra mile to rehabilitate former PWG members. The big question now is how far can Naidu go to buy peace? Plus, it's still too early to gauge the PWG's commitment to negotiated peace. "But either way, with so much at stake, this is an experiment worth trying. Even if the talks fails, we will have the satisfaction of knowing that it was not for lack of trying," says professor G.Hargopal, member of the Concerned Citizens Committee (CCC), a pressure group largely responsible for bringing the two sides to the negotiating table. CCC convenor S.R. Shankaran, an ex-bureaucrat, enjoys considerable goodwill in all quarters. So should the need arise for a mediator, he would be the most likely choice.

The latest initiative, no doubt, is a step forward. And with the PWG seemingly adopting a more realistic and pragmatic approach, there is a slim chance that the peace effort will yield something positive.