The Ballad Of Babel

The Booker winner finds a novel that pierces through Mumbai’s masquerade, capturing its miasmic heart 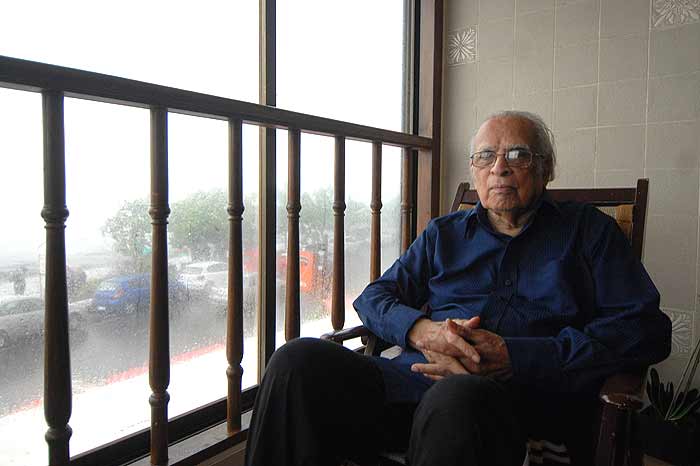 outlookindia.com
-0001-11-30T00:00:00+0553
A truly first-rate novel of the corporate workplace hardly exists in Indian literature; equally rare is a novel of sustained psychological intensity. A book that combines these qualities, hence, should be greeted by much acclaim. The odd thing is that there has been just such a novel around for years, and hardly anyone seems to know about it. Published in 1979, Yashwant Chittal’s Kannada novel Shikari tells the story of Nagnath, a migrant from north Karnataka who has risen to a high-ranking position in a chemicals corporation in Bombay. When the novel begins, Nagnath has just been plunged into the biggest crisis of his adult life: he has been suspended from his job for an unknown offence. Eventually, he discovers that he is accused of complicity in a fire that has killed three people in the company’s factory in Hyderabad. Nagnath is a brilliant, if somewhat eccentric, chemical engineer, who has been warning his superiors about safety issues in the factory: someone has set him up for a fall. This is the shikar of modern-day India, where Darwinian instincts of aggression and self-preservation have migrated into the business world. As he slides into a world of corporate intrigue and paranoia, rife with accusatory letters, secret alliances, and messages of sympathy from unexpected sources, Nagnath becomes convinced that he has been framed by his firm’s deputy managing director, the aptly named Phiroz Bandookwala—although why Bandookwala wants to destroy him is still a mystery.

Shikari explicitly acknowledges its debt to Kafka in its first few sentences; then it goes to places that Kafka had never dreamt of. Even as Nagnath is coming to terms with Bandookwala’s treachery, he finds himself the victim of another act of betrayal. Nagnath, an orphan who educated himself with a scholarship from Bombay’s Saraswat Brahmin community, discovers that Srinivas, a childhood friend, is spreading word that his mother was a low-caste woman, and that he’s been masquerading all these years as a Brahmin. Srinivas has even gone all the way to Goa, the ancestral home of the Saraswats, to collect information about Nagnath’s true lineage.

Instead of fighting back, Nagnath goes into a shell. We learn that Nagnath (much like Chittal himself) has been writing Kannada short stories when he is not at his day job. Now in his crisis, he responds as a writer would: by jotting down a series of notes, possibly raw material for a novel, in which he records his growing anxiety. When a genial old man, a stranger, whom he sees at Shivaji Park, inexplicably strikes fear into him, he runs into his room and writes: “Am I running because I’m frightened? Or is it that the fear is generated in me because of the physical act of running? Must remember to read William James again.”

Bombay of the late ’70s: a city obsessed with status, class and profoundly hypocritical on sex. Shikari, with its coarseness and erudition, ‘gets’ it.

Nagnath’s erudition only serves to highlight his increasing coarseness. Asked about his mother’s origins, he responds: “Get your hand out of my genealogy, you son of a bitch!” If the swearing occurs equally in Kannada and Hindi—behenchods alternate with bolimagas—the novel is also full of English abbreviations and phrases—DMD, MD, R&D, Manager, Special Assignment, Personal & Confidential—that give us a flavour of the Bombay corporate world of the 1970s. Entire sentences sometimes appear in English, pitch-perfect in their sensitivity to the novel’s mix of farce and existential angst, as when a Parsi executive tells Nagnath (in English): “Sorry for being so coarse. But I am sure you will agree with me when I say that the prime mover of the organisation—the motive force behind the facade of its evolving structure and all that four letter jargon is the ambition of the individual to climb its tall ladder.” The multi-lingual dexterity of the novel is one of its great charms. Warned that he might be cast out of the S.B. (Saraswat Brahmin) community of Bombay, Nagnath welcomes his expulsion from “your S.B. (S.O.B.) society”.

Shikari has magnificent descriptions of the teeming and multicultural life of inner city Bombay: from his flat in a Khetwadi chawl, Nagnath stares out at bhaiyyas carrying milk in aluminum cans, boys selling newspapers, Udupi restaurants, the printing press of the Communist Party that stands at the entrance to a galli, and an old man sitting in front of a portrait of Dattatreya and singing loud bhajans. (Why such a successful executive continues to live in a congested chawl is one of the mysteries surrounding Nagnath, as are the strange burn marks on his chest, and the question of why he is avoiding the comfort of his mistress during such a crisis.) Bombay is a source of food and drink for the bachelor Nagnath, but it is also a beacon to suicide. We discover that his father killed himself, and that his mother’s death, as is so much of his early life, is shrouded in obscurity. Watching the waves crash into Chowpatty beach, Nagnath wonders if he should plunge himself into the water, much like his father had done.

Beer is one way to stop thinking about suicide. Nagnath drinks, prodigiously: in the Sher-e-Punjab restaurant, in his home, in corporate guesthouses, and even in Irani cafes without a permit that serve him beer behind a curtain. When that does not help, he starts using barbiturates. Unexpectedly, he finds another kind of relief: suddenly, all the women he meets, whether it’s the Christian secretary from his company or the Irani air-hostess on the flight to Hyderabad, start propositioning him. Is this really happening, or has he started hallucinating under the influence of beer and barbiturates (as he himself suspects)?

By shifting between Nagnath’s first-person notes and a third-person narration, the novel undercuts the objectivity of its protagonist’s perceptions. Yet, it never relinquishes its power to pass judgment on the Bombay of the late 1970s, a society obsessed with status, class, and profoundly hypocritical in matters of sex. In a powerful scene, Nagnath discovers why his friend Srinivas has been “investigating” his origins. Srinivas confesses that he has heard a rumour that Nagnath plans to write a novel about his life—a novel that will be serialised in the Illustrated Weekly of India and will tell people that Srinivas, though a successful businessman and a respected member of the Saraswat community, began life in extreme poverty. This is an India before Dhirubhai Ambani, when self-made men did not brag about their origins—in this India there is no greater shame than the shame of having once been poor. Going down on his knees, Srinivas begs Nagnath not to expose his past, because he is planning to run for office in the upcoming Municipal Elections. Now Nagnath understands why Srinivas and Phiroz Bandookwala have been gunning for him: in their eyes, he is the shikari. He turns and runs for his life. 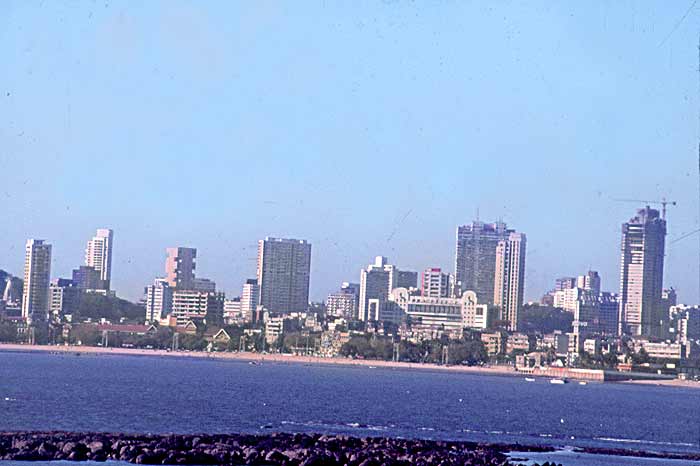 Concrete jungle Behind its giddy skyline, Mumbai’s is a harsh land. (Photograph by Abhijit Bhatlekar)

There is no escape. A rich array of antagonists gang up against Nagnath, including the staunchly anti-Brahmin literary journalist who is convinced that the anonymous letters besmirching Nagnath’s caste origins are a conspiracy launched by Nagnath himself to win the sympathy of anti-Brahmin literary journalists. One morning, Nagnath finds himself driven in a Mercedes Benz to the Taj Mahal Hotel, to face an inquest headed by three executives who will determine his future in the company. For some reason—typical of the absurd yet inevitable way in which events unfold in the novel—Nagnath’s inquisitors have decided to order chilled beer instead of tea, even though it is morning, and they have gathered on official business. As they wait for the beer, Nagnath observes that all three of his inquisitors are Parsis, the community to which his nemesis Bandookwala belongs. His heart sinks. On the other hand, Parsis are famous for their sense of justice and fairplay, aren’t they? There is still hope, Nagnath feels. Then the beer arrives, all of them start drinking, and things become very surreal inside the Taj Mahal Hotel.

Shikari is rich with references to existential philosophers like Camus and Erich Fromm, but it’s in a parallel series of images drawn from Hindu mythology that Chittal maps his protagonist’s transformation into a man who rejects his former existence in the corporate world, even when he is given a chance to clear his name and go back to his job. On his way to the dreaded inquest, Nagnath catches his own image in a mirror in the Taj hotel. He is half-expecting that his inner crisis has transmuted him into a Shiva or Buddha: “Outwardly there was no change: no horn had sprung on his head, no new eye had opened on his forehead.” An even more poignant image comes at book’s end. Running out of a brothel, Nagnath arrives at an epiphany that is both surprising and logical, unexpected and triumphant: he understands what he has been suppressing since his childhood, and what he must do with the rest of his life. “His Vanvas has just ended,” we’re told. “The Ajnatavas still lies ahead.” It is the most moving finale to a novel that I’ve read in years.

Yashwant Chittal is one of the Kannada poets, short story writers and novelists who flourished in Bombay after Independence. Some of these writers are dead; some, like the short-story writer Jayant Kaikini, have gone back to Karnataka. Chittal—now in his eighties—is still here. Thousands of Mumbaikars gather every evening at the Bandra Bandstand, but even the most literary among them are unaware that they are right outside the home of a novelist who has captured their city as well as Suketu Mehta or Salman Rushdie. Shikari is my favourite Bombay book; with its blend of learning and raffishness, black comedy and existential anxiety, its obsessive inquiry into ethnicity and the urban experience, it reminds me of Saul Bellow’s great novels. Given the right translator, and even moderate backing from a publishing house, it will establish itself as a classic of modern Indian fiction.