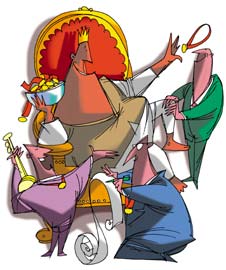 Democratic India has a subterranean feudal reality. Nothing reveals it better than the annual Republic Day awards rigmarole. Instituted in 1954, the state decorations for civilians has always risked pandering to the idea of providing patronage to loyalists. The award pattern this year has brought the malaise into sharper relief. With 11 Padma Vibhushans, 31 Padma Bhushans and 66 Padmashris, India's most coveted awards total an abundant 108 this year—double the original number in 1954.

Interestingly, serious doubts were raised about the entire awards scheme in the past decade. This resulted in a pil challenging the continuation of these awards in the Supreme Court in 1995. A five-member bench headed by the then Chief Justice A.M. Ahmadi had observed: "The guidelines contained in the communique from the ministry of home affairs towards the selection of probable recipients are extremely wide, imprecise, amenable to abuse and wholly unsatisfactory for the important objective that they seek to achieve."

These stern sentiments notwithstanding, the awards scene has continued to evoke cynicism. Scientist Pushp Bhargava—himself a Padma Bhushan—says: "People have been picked up from anywhere. Today the question is not of merit, it's of political concern." Besides, the choice of awardees is also determined by the gauge of popular appeal. Rigorous contributions are often sacrificed at the altar of mass acceptance.

A little more than a cursory look at the list of recipients this year is revealing:

Says Shiv Vishwanathan of CSDS: "If you compile a loyalty list, many of those awarded will figure in this list. I would also say that this is not a list for the deserving."

With this year's announcement of the awards, the debate on the veil of secrecy that surrounds the selection process has also once again been revived. A primary list of nominated candidates is prepared by the selection committee which has, among its members, the home secretary, the cabinet secretary, the secretary to the President of India and renowned names from various fields. (This time, it included actor Anupam Kher and TV anchor Rajat Sharma). Says a senior home ministry official: "Within a matter of two to three days, hundreds of nominations are screened and names finalised. The file then moves to the home minister, the PM and the President for approval. Changes take place at this level too."

The idea of holding secret the names of committee members is to facilitate free and fair selection. Says a Supreme Court lawyer: "All the governments have abused this rule. Even the award citation doesn't give the exact reason for being felicitated. "

Retrospective criticism of this year's felicitation of businessmen can be read in the landmark judgment: "The Padma awards have been conferred on businessmen and industrialists who have multiplied their own wealth and have hardly helped the growth of national interest."

Interestingly, the awards have a history of debate going back to the late sixties. In the year 1969 and again in the year 1970, the late Acharya J.B. Kripalani, who was then an MP, moved 'The Conferment of Decoration on Persons (Abolition) Bill, 1969' for their abolition. The Bill led to a long debate in Parliament and was eventually defeated.

Senior columnist Sudheesh Pachauri sees no logic in continuing with the awards: "They can be bought now. It's a sarkari felicitation of personalities by their political fathers. The best solution would be to close down the awards and utilise the money spent for the National Relief Fund."

However, this suggestion is bound to remain in the realm of ideas. Five years after the Supreme Court judgement, the government is thumbing its nose at the observations. Closure is a far cry, the awardee-list is growing in size, much like the jumbo cabinets of the day. Purpose being the same—political growth by partisan appeasement.

Crafting Ruin: The many aftershocks