Home  »  Magazine  »  National  » politics: congress »  The Baba And The Blusterer

The Baba And The Blusterer

Rahul vs Modi is an unequal combat. But there are more lessons than Modi might expect. 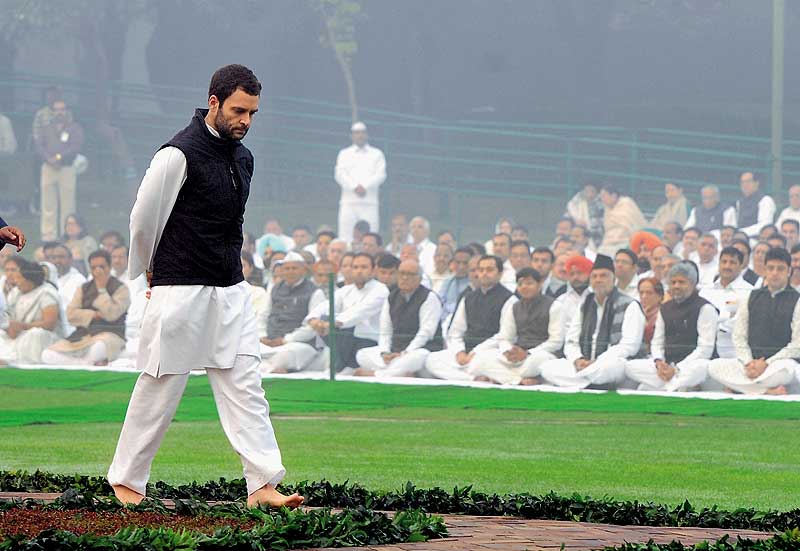 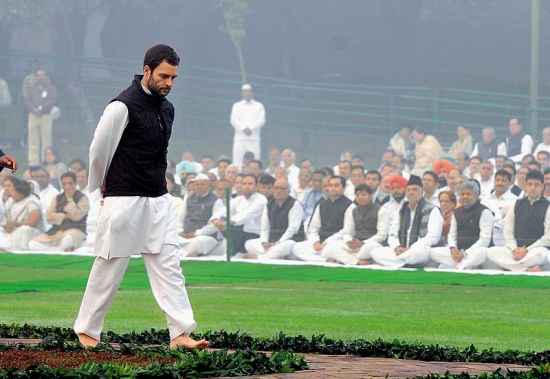 Weighing Up The Newbie

The Path Of The Juggernaut

There appears to be a great asymmetry to the contest. Narendra Modi gets bigger with each stride towards that presumed third-term victory in Gujarat. He is brash, confident, ruthless—the absolute Alpha Male, getting rousing endorsements from the crowds in Gujarat, and committed in the long term to expanding his power, clout, control. Pitted against him on the national electoral route that will lead from Gujarat to the 2014 general elections will be the reluctant prince of the Congress, Rahul Gandhi. With that faraway look in his eyes, he’s still seen as a novice committed to the greater good rather than power play. He is hesitant, reluctant, falters in his speeches. He seems to have little ambition or enthusiasm for power. He is just there to do his duty by the dynastic calling that the Congress has now become dependent on.

So the question really is: Does Rahul have a plan to take on Modi? Ask a senior Congress leader, and he laughs and counters with a query of his own: “Do you have a plan to take on Modi? I think members of the BJP will be more engaged in taking on Modi after Gujarat. Rahul Gandhi will just do his duty and campaign where he is asked to in Gujarat.” Currently, there is both great expectation and great ignorance being displayed by Congress leaders. There is certainty that the heir apparent is about to play a greater role in party affairs but no one seems to know when exactly it would happen. Last time this correspondent checked, word was: it could happen tomorrow, day after, next week.  “In our party, we don’t know when the high command will take decisions; but one day, they suddenly do, and things happen,” says a media cell member.

Rahul does not really fit into the figure of a David armed with a slingshot taking on a Modi of Goliathic proportions.

There is also the belief that the recent cabinet reshuffle gives the right signals to the corporate world and in the long term that support is essential for Rahul to have a future. Despite the furore over Jaipal Reddy’s removal from the petroleum ministry, sources both in party and government insist that the economic realities were such that it was imperative to send out the message that Rahul was for economic growth. Says an insider: “There is a lot of confusion about the pro-poor and aam admi policies being inimical to growth and we need to correct that—specially if Modi is the face Rahul will be up against, for the Gujarat CM is feted by the business class.”

Currently, when the contest is in Gujarat, Modi is the Goliath but it is unrealistic to see Rahul as some David-like figure with a few stones and a slingshot, defeating the Man in his fiefdom. Indeed, national leaders have traditionally not been able to combat strong state leaders. He only need look at his family’s election history. Grandmother Indira Gandhi could not do anything about the rise of NTR in Andhra Pradesh in the 1980s. Rajiv Gandhi tried to give a spirited fight to West Bengal’s Jyoti Basu in a state election, but really could achieve nothing. Indira and Rajiv were both prime ministers. Rahul is still unproven political material. And the Congress has been blitzed by corruption scandals, the most recent touching Robert Vadra. Photograph by AFP, From Outlook 12 November 2012

There is also a stark difference between the Gujarat poll and a national contest. In the 2009 Lok Sabha election, the Congress had a lead in 75 assembly segments of Gujarat. Besides, there is no denying that the Congress has a presence in the state as there is no other political force opposing the BJP. Hence, logically its chances in Gujarat should have been brighter than 2007. The showing in the 2009 Lok Sabha polls also led to many pundits in Ahmedabad predicting that Modi would get a fight this time round, particularly as Keshubhai Patel, former BJP CM, had finally quit the BJP and declared his intention of fighting Modi. Yet the situation that is emerging on the ground suggests that Modi would not just be holding his bases but could even improve on his performance.

The only solace for Rahul is that, on the national stage, Modi will face much harsher scrutiny than in Gujarat.

In such a situation, how should Rahul Gandhi be positioned in Gujarat? There is clarity in the Congress that he should not take on Modi with any personal attack or make references to the 2002 riots. His mother Sonia Gandhi made an appearance in the state and did not mention the riots or Modi by name. Arjun Modvadia, president of the Gujarat Congress unit, says that Rahul will definitely campaign in Gujarat. “We hope he will have three to four rallies,  although the programme and dates are not finalised yet, so we can’t be certain of the numbers. There could be more or less.” In other words, not clear yet. Party general secretary B.K. Hariprasad was in charge of Gujarat in 2007. He says there is no question of Rahul not campaigning. “We are a national party with a certain structure. The BJP may leave things to state leaders, but we have a clear hierarchy and the importance of the national leadership cannot be overstated.”

The trick for Rahul would be to avoid making any blunder that Modi can seize upon. He would also do well to keep the focus on local issues and not allow the CM to personalise the contest. It would suit Modi to turn this into a clash of two individuals. It would not suit the emerging persona of Rahul, which has many vulnerabilities. What Rahul can take solace in is the fact that a national contest will be vastly different and Modi will not be the big fish in a small pond. Should the Gujarat strongman be positioned as the face to take on Rahul in a general election, then he too shall be subjected to a scrutiny that will show up the chinks in that heavy armour.