The Ascent Of Man

He's always done exactly what the situation asked of him. Every which way. Updates 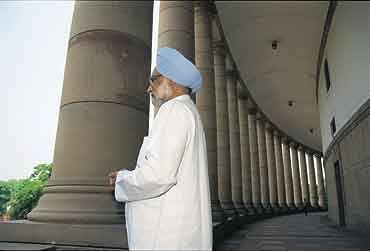 outlookindia.com
-0001-11-30T00:00:00+0553
Left, right, left, right.... No, it's not the new prime minister walking to his office. It's the ideological swings that one has witnessed in Dr Manmohan Singh over the past three decades. In 1970, teaching international economics at the Delhi School of Economics, he was telling his students that the value of a currency should be decided entirely by market forces. But a couple of years later, he was chief economic advisor in the finance ministry, recommending policies that fitted Indira Gandhi's ultra-socialist agenda like a glove.

His book India's Export Trends and Prospects for Self-Sustained Growth is a blistering attack on the policies of the World Bank and IMF. Yet, one of his first acts as finance minister in 1991 was to take a $5 billion IMF loan.

Loyal soldier, honest administrator, cold-blooded pragmatist, efficient CEO willing to carry out whatever orders are given to him by his board...in a way, all these qualities make Singh perhaps the perfect man for an extraordinary task: a government to be run, a dozen agendas balanced, a resurgent party's vote base widened and a family's political supremacy re-established firmly.

But again, Dr Singh has always defined himself by the tasks he has to perform.

Over a decade ago, a senior journalist asked him about one of his known U-turns—from being a supporter of socialism as secretary general of the South Commission in 1987-90 to ardently endorsing the capitalist model of economic reforms in 1991. Singh's reply: "I was against (bureaucratic) controls all the time.... I have spoken my mind (in the past).... But I served as a faithful civil servant...(and) carried out the orders of my political masters." Not too many people realise that that's what he did as the finance minister (1991-96) too.

When he took over, his political boss P.V. Narasimha Rao told him to open up the economy as the country had no option but to go in for a huge IMF loan that came with several strings attached. Three years later, under heavy criticism from inside the party and having lost several assembly elections, Rao asked Singh to turn the clock back on economic policy. Immediately, the FM switched from market economy to welfare state. His squeeze on money supply to curb inflation and stabilise prices was a banana peel to Indian industry just sprinting off the starting blocks after three years of reformist policies. But the Congress lost the 1996 national elections anyway and Congressmen attached much of the blame to the economic reforms and Singh.

Yet, with the entry of Sonia Gandhi into active politics in 1998, the good doctor was back in the Congress' front ranks. To Mrs Gandhi the Second, his shining integrity, remarkable intelligence, distaste for petty politicking, and genteel loyalty to the family—a quiet constancy very different from the usual Congress sycophancy—were extremely precious commodities.

Now, Dr Singh has to lead. With the real power centre located at 10, Janpath, and not 7, Race Course Road. With volatile allies who span the ideological and political spectrum. With senior politicians inside his own party viewing him as a political outsider, the only prime minister of India who has never won a Lok Sabha election. He is also armed with the knowledge that a government which delivered over 8 per cent GDP for the year that ended two months before polls still lost the elections.

"He'll have to walk a delicate course. There'll be many politicians both inside and outside who'll want to create a rift between him and Sonia Gandhi," says a political commentator who has interacted with Singh on regular basis for over a decade. But then, a two-centre setup also has its advantage—if the two agree to work closely they can easily come to a cosy arrangement". If people walk up to Sonia with complaints, she can ask them to talk to the PM. And Singh can do the same," says a senior Congress leader. No one sees much probability of a rift between Sonia Gandhi and Singh.

Over the years, Singh has learnt the art of politics. He echoed Narasimha Rao in a recent interview: "I have come to realise that politics, after all, is the art of the possible. And sometimes you have to compromise." Listen carefully to his recent statements, watch the way he delicately balances the various ideological factions. "He's talking about the 21st century belonging to India as well as pursuing reforms but with a human face. He's talking about the fact that reforms have to ultimately benefit the poor and improve their lives," explains Paranjoy Guha Thakurta, director, School of Convergence, who has interviewed Singh a dozen times during his journalistic career.

Politics has also taught Singh to evolve a consensus on critical issues. Most people who have watched him at Congress meetings say he rarely speaks his mind and that too only after he has listened to what others have to say. "Even his view that one should not pursue privatisation as an ideology has evolved from varying opinions within the party. He now knows how to couch things in politically acceptable terms and hence he'll be more effective this time," says one of them. Another says he understands that one doesn't need to shout from rooftops to get things done.

This is a very different man from the one who took over the country's economic reins 13 years ago or even the Lok Sabha candidate five years back. In his first press conference after he became FM, he had announced that no prices will be rolled back, contrary to the promise made in the Congress election manifesto. A furore followed. During his first and only attempt to win a seat in Parliament (from the South Delhi constituency), Singh said the RSS was to blame for the 1984 Sikh riots. Most political pundits believe a major section of the Sikh community in the constituency voted against him, leading to Singh's defeat in an area packed with middle and upper middle class voters who had benefited the most from his reforms.

What will surely work in Singh's favour is his image—honest, squeaky-clean and transparent. His friends talk about his days in the Opposition when his house at 19, Safdarjang Road, would be leaking and the men from the municipality wouldn't come to repair it for days. But he never pulled his rank. It is this sterling quality—Mr Clean's Mr Clean that gives him the moral authority over his critics. It gives him the strength to put his foot down when push comes to shove.

This moral altitude also allows Singh to use the ultimate ace up his sleeve—his ace of hearts. His thrones have always been chairs he can walk away from. He threatened to resign more than once during his stint in Planning Commission, once when the then prime minister Rajiv Gandhi called Planning Commission members "a bunch of jokers". He did it twice when he was FM; the first time within months of taking over when Rao asked him to partially roll back the hike in fertiliser prices, and the second when it was leaked that the jpc report on the Harshad Mehta scam had indicted him. Many perceive that his resignation outbursts have do with his being an extremely emotional person. But others who know him well see it as win-win strategy. Not a bluff to be called, but the ball sent with a shrug to the other side's court.

At the moment, the economic winds are favouring Dr Singh. In 1991, when he became the finance minister, the economy was nearly bankrupt and there were few options available. So, the country had to pop some bitter pills.Today, the economy is in good shape, GDP growth is robust, forex reserves are surging, inflation is low, and all this will allow his government to even increase subsidies and absorb lower disinvestment proceeds (see Red Curry Feels Good). And as for the realpolitik minefield that the country's 14th prime minister will have to negotiate—unusual situations require unusual men. In this case, it's just as well that India's got a political helmsman with no political ambitions.

Rise And Fall Of The Second Indraprastha