­The Arrival Of Cyclone Chinna Amma

Sasikala, a Jayalalitha or a Janaki redux? That’s a ­million-dollar question for the post-Amma party. 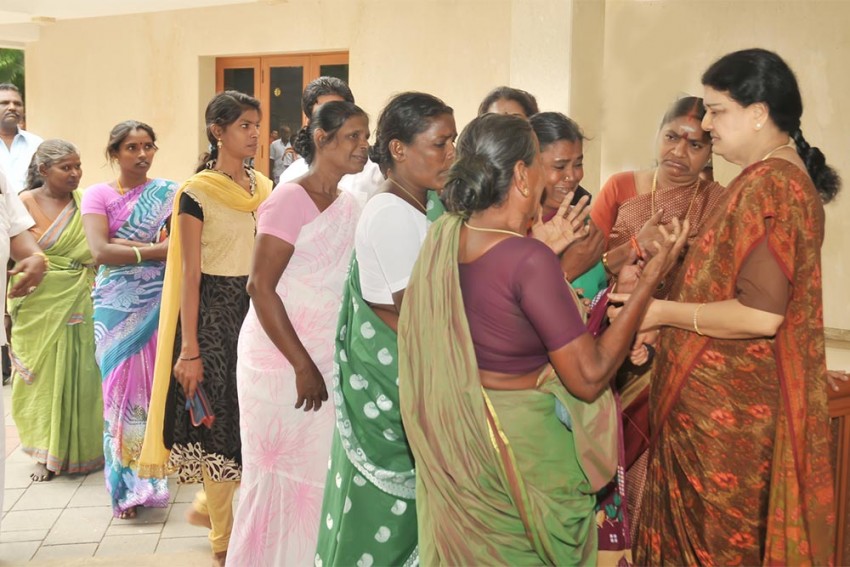 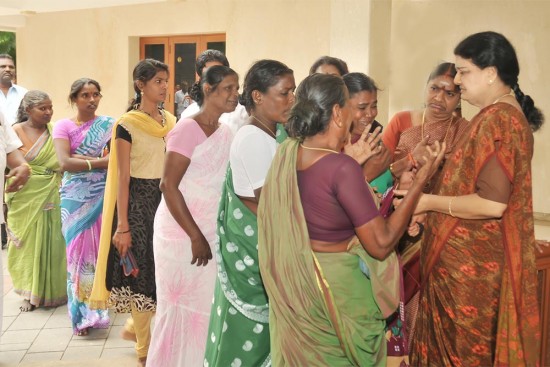 A day before Cyclone Vardha left Chennai devastated, Tamil ­Nadu’s political climate had been stupefied by an interesting development—the stunning immediacy with which frontline leaders of the AIADMK flamboyantly queued up at Poes Garden, requesting V.K. Sasikala to take over the party’s mantle. Perhaps it was not all that unexpected, given how the new cabinet took over within two hours of J. Jayalalitha’s death. Sasikala and her family are said to be behind the smooth transition of power. It had taken 48 hours for a new cabinet to be ushered in when Jayalalitha was convicted by a Bangalore special court in the ­Disproportionate Assets case in 2014. Interestingly, if the ministers had flaunted Jayalalitha’s photographs in their shirt pockets and shed copious tears when taking oath then, such demonstration of loyalty was conspicuously missing this time.

The narrative that is perhaps consciously built by Sasikala is unmistakable. In making the party accept her leadership without asking any questions, Sasikala is as impeccable as Jayalalitha was, if not more. Images of party seniors standing in front of her with folded hands as if urging her to don the role of saviour are being released to the media every day.

Sasikala might ­manoeuvre to keep the party going, maybe toe the BJP’s line to begin with, says former MLA Pazha Karuppaiah, who quit the AIADMK a few months ago.

Days after Jayalalitha passed away, Sasikala began to meet visitors at Poes Garden and accept their condolences. Leaders such as Sengottaiyan, Thambi Durai and O. Paneerselvam, who were expected to kick up some noise, released statements professing their loyalty to Sasikala’s leadership. Paneerselvam even said anyone opposing her leadership couldn’t be a sincere party cadre. Party-owned television channel Jaya TV began ­addressing Sasikala as Chinna Amma (junior mother) and visuals of leaders expressing their support were repeatedly telecast. Images of party MLAs and some ministers falling at Sasikala’s feet in front of Jayalalitha’s memorial emerged, even as Chinna Amma stood stoically, sometimes even looking away. It looked like Chinna Amma had finally arrived.

For Sasikala, who was introduced to Jayalalitha as the proprietor of a video-­recording company interested in shooting her public meetings in 1984, this was a big moment. This could be the ­moment she had been awaiting all along, the moment she probably had been betting her entire life upon. “Since her first meeting with Jayalalitha, Sasikala has been taking the right decisions. The decisions led her to where she is now,” says Durai Karuna, a senior Tamil political commentator, who has closely observed the AIADMK over three decades. It was through IAS officer Chandra Lekha (who would later become a victim of acid attacks by AIADMK goons) that Sasikala had first met Jayalalitha. Sasikala’s husband Natarajan was working as the government public relations off­icer at Cuddalore district when Chandra Lekha was the collector. The friendship grew as Sasikala kept going to Poes Garden and the party office under the pretext of handing over video cassettes of public meetings. When Jayalalitha was elected as Rajya Sabha MP, her personal secretary had fallen ill and Jayalalitha needed someone to assist  her in Delhi. That’s when Sasikala moved in and her family began to advise Jayalalitha on political matters. During politically trying times, Sasikala’s family threw their lot behind Jayalalitha, urging her to hang on, telling her she was capable of being a mass leader. And yet many say Chinna Amma managed to stay in Amma’s good books mainly ­because Jayalalitha needed someone who would attend to her needs.

“There are certain issues that Jayalalitha wouldn’t deign to discuss with her party colleagues. Sasikala would do it for her,” recalls Pazha Karuppaiah, a senior politician and former MLA who quit the AIADMK rebelling against its leadership a few months ago. “Party leaders had to go through Sasikala to meet Jayalalitha, never bypass her. It is like how you would pay obeisance to Ganesha before you proceed to worship Shiva. Party leaders would often fall out of Amma’s favour and sometimes some of them would be rehabilitated and some would not. But Sasikala was a constant. Jayalalitha couldn’t just do away with her. It is not new for party leaders to take orders from Sasikala. They have been doing it for 25 years now. I am not surprised they still want to do it”. 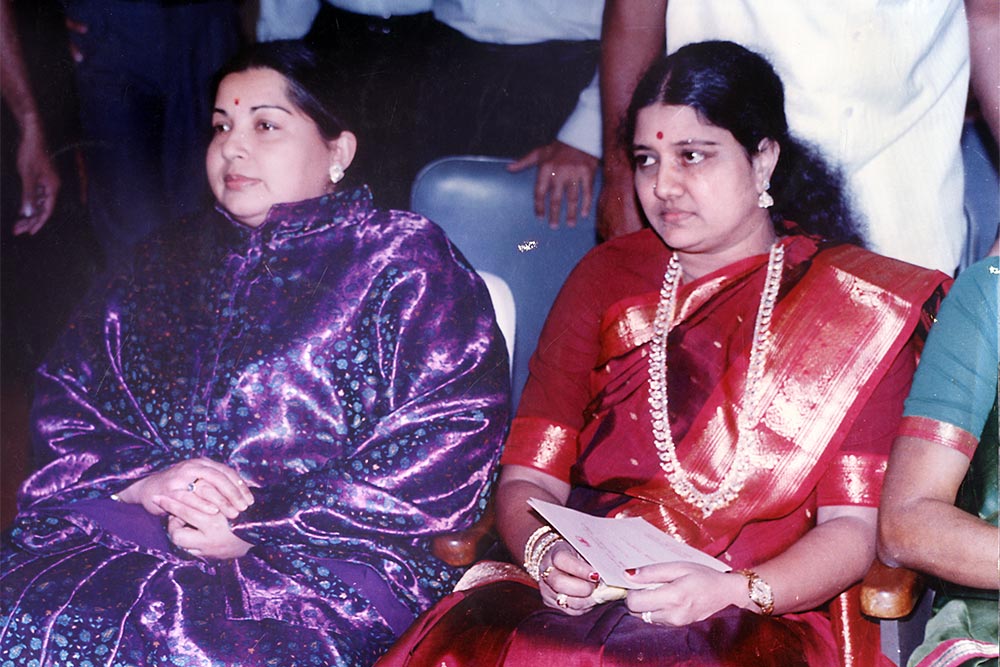 For many party leaders, Sasikala is representative of the unifying force that would keep the AIADMK from falling apart. “The party would be caught in the web of groupism if any other leader is elected. With four and a half years in power to go, not a single MLA would want the party to disintegrate,” says Karuppaiah.

According to Karuna, “In all, 75 per cent of those who enjoy power today both at the party and at the government were chosen by Sasikala. That is why she did not face the kind of opposition Jayalalitha had faced soon after MGR died.”

Those who have seen Sasikala ­up close don’t hesitate to claim she has taken on Jayalalitha’s ­cha­racteristics over the years. “She has spent over 30 years with Amma,” says a senior AIADMK leader.

“If Amma was not around, she spoke and behaved just like her. She tells us to do things the way Amma did. Of course, it was different if Amma was around. Sasikala would be very resigned in front of Amma. But to party leaders and cadres, Sasikala is definitely Chinna Amma because even Jayalalitha tacitly approved of it. Whe­never Amma was not around, Sasikala ­always donned her role with us. And that’s what we expect her to do now.”

Sasikala might easily become the AIADMK’s general secretary, but to make the masses accept her as they had accepted Jayalalitha could be tougher. For one, Sasikala lacks Jayalalitha’s charisma. Also, the suddenness of Jayalalitha’s death after showing some progress at Apollo hospitals has sown seeds of scepticism among the general public, with actors like Gautami almost echoing it.

The biggest stumbling block, no doubt, would be Sasikala’s family that Jayalalitha had kept at bay. Having faced everything from sidelining of posts to raids and arrests when Jayalalitha was around, the entire family was seen taking control of affairs soon after her death. If Sasikala chooses to keep her family in the limelight, it would spell the biggest disaster for the party. But Sasikala might do a bit of man­oeuvring to keep the party going, maybe, as Karuppaiah says, toe the BJP’s line to begin with. Whether she would continue to do it in the long run or do a Jayalalitha is a question that looms large over the political future of Tamil Nadu.

Karuppaiah, however, thinks Sasikala is no Jayalalitha. “She would instead do a V.N. Janaki, MGR’s widow,” he says. “Janaki managed to get the support of party MLAs and became the chief minister. But she had little pull over the masses. Sasikala might even win the R.K. Nagar byelection and become the CM. We will have to wait until general elections to see if she can survive. But if she sinks, the party will sink with her.”

For now, Sasikala has power and pelf to keep the party flock together. But whether the party, almost solely built on an anti-Karunanidhi edifice, would withstand a general election in the absence of a pop­ular face is a million-dollar question. (Int­erestingly, Sasikala and Natarajan got married in Karunanidhi’s presence.)

For a party that boasts of over one-and-a-half crore cadre, there couldn’t be a better moment for introspection.