A career in the grey zone didn’t dim his genius. It coloured it. 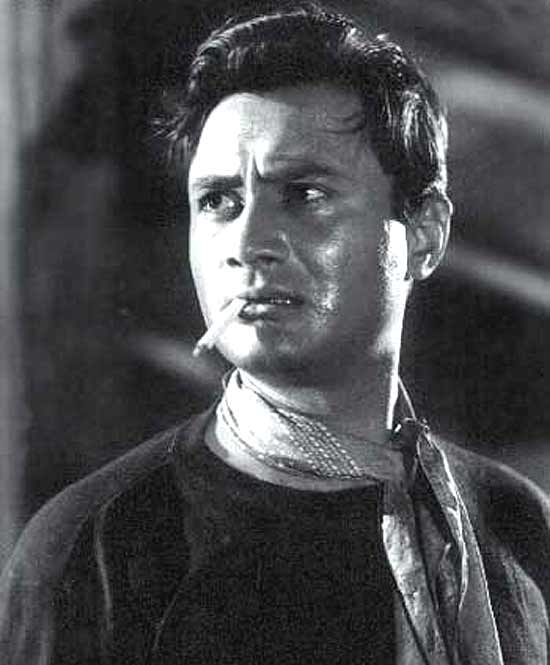 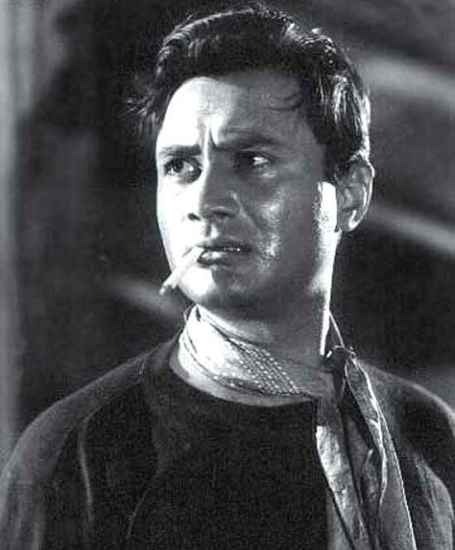 This grand promise of love in Vijay Anand’s Guide (1965) is the lead-in to S.D. Burman’s romantic melody Tere mere sapne ab ek rang hain. It also underscores why Dev Anand’s role of Raju guide would go on to become the most iconic of his sprawling acting career. It’s Raju who supports Rosy’s opting out of a loveless marriage. Rosy (Waheeda Rehman) has to keep her passion for dance at bay and her love life is barren in the hands of a philandering, indifferent husband. She finds liberation in her relationship with Raju guide who also acts as her agent and encourages her to pursue a career in dance. But his life soon goes into a downward spiral and greed forces him to take to crime.

It is one of the definitive modern portrayals of adultery in Hindi films and a persuasive character sketch of a weak, avaricious, deceitful man. But in Dev Anand’s filmography, the questioning and challenging of morality and ethics isn’t unique to Guide alone. It runs like a thread, especially in his black-and-white films of the ’50s and early ’60s. 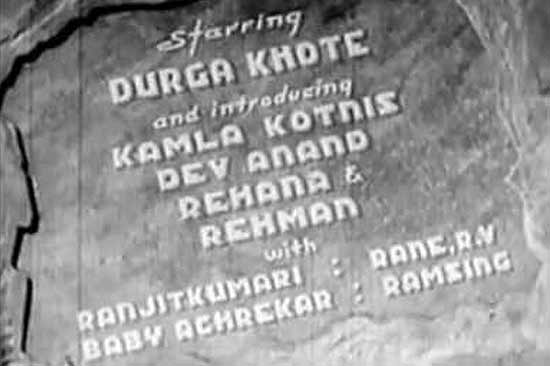 At a time, fan loyalties were very clearly divided between Dilip Kumar, Raj Kapoor and Dev Anand. A devotee of one could not admire the other. Dev Anand got the raw deal in this trinity worship. Dilip Kumar got critical appreciation for his intense tragic heroes and Raj Kapoor got accolades for his social commitment as the Chaplinesque tramp. Dev Anand was largely perceived as suave, slick, urbane and charming. And therefore, shallow. Over the years, we celebrated his songs, his never-say-die spirit, his Gregory Peck styling, puffed hair, mannerisms and awkward gait. But being Dev Anand was about inhabiting a complex, edgy and morally ambiguous zone. The beginnings of an anti-hero, before the term became part of popular lexicon.

The fallibility of the characters he played made one feel close to him. That aimlessness and frailty could strike a chord in any era, with any generation.

Raju guide’s sinner-to-saint graph had mystical, spiritual undertones. His predecessor had been a far more problematic, transgressive and non-conformist Bambai Ka Babu (1960). Dev Anand is the titular Babu, the criminal who pretends he’s Kundan, the long lost son of a rich zamindar, in order to steal the family’s riches. Unexpectedly, he falls in love with the zamindar’s daughter Maya (Suchitra Sen), ostensibly his sister. It’s an indefinable relationship hanging precariously between deep passion and perceived incest. The friendly, sisterly banter is reciprocated with an obsession without scruple. The taboo, defiant love is brought out in an electric dream sequence where Babu tells Maya that he doesn’t want a sister’s affection from her, but a woman’s love. He does not want her to call him bhaiyya (brother) and rejects her attempts to tie the rakhi. However, he is able to find redemption by eventually subjugating his forbidden desire and being faithful to his parents and a family that is not his own. 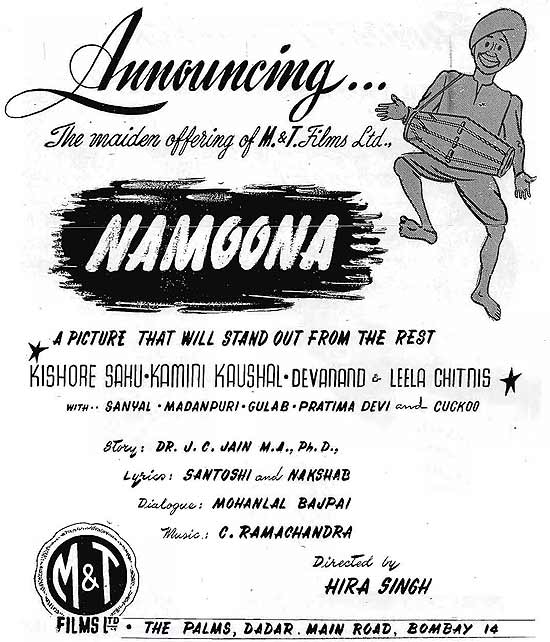 Namoona The theme of his 1949 film dealt with incest

Baazi (1951) could well be the first Dev Anand film set in such grey zones. He plays Madan, a small-time gambler, essentially innocent at heart, but forcibly sucked into a world of crime to be able to afford his TB-afflicted sister’s treatment. Love reforms him. As it does in Kala Bazaar (1960), where he is the blackmarketeer of film tickets. Jaal’s Tony (1952), however, has fewer compunctions to redeem himself. He seduces brashly, literally trapping the girl in a net of desire with the ensnaring song Ye raat ye chandni phir kahan.

The dark, noir feel of the films added to the shadowy characters he played. Be it Taxi Driver (1954), where he is a cabbie who gets involved with criminals who steal his cab for a robbery, or House No. 44 (1955), where he is a pickpocket-turned-police informant. The get-up, easy swagger and cool attitude added to the persona. As did the smoke of the innumerable cigarettes in film after film. In his world, there is moodiness and atmosphere and certain prominent motifs. Like the grungy gambling dens with bar girls seducing, singing and dancing with abandon. And often falling in love with him. The most mysterious of these femme fatales was Waheeda Rehman in CID (1956). 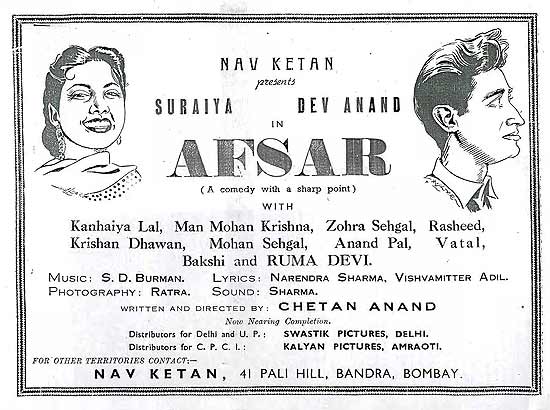 It’s interesting to count the number of films in which he plays an impostor. He dons a disguise in Taxi Driver, leads a double life in Munimji (1955), pretends to be Kalpana Kartik’s husband in Nau Do Gyarah (1957) to claim his rightful inheritance, and masquerades as an old man in Paying Guest (1957). There is even a fight of the two guises. He uses cover-up to nab counterfeiters in Jaali Note (1960). He assumes the identity of a thief to infiltrate a gang of thugs in Jewel Thief (1967) as he does in Johnny Mera Naam (1970). In Prem Pujari (1970), his army officer dons several impersonations to expose a spy ring that is leaking India’s military secrets. 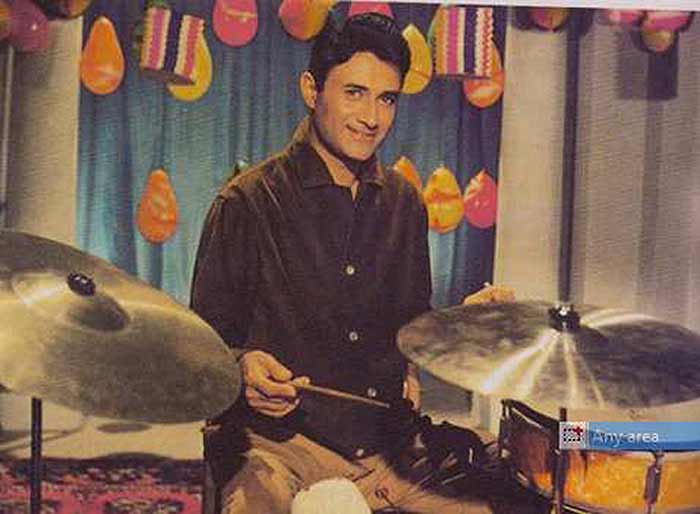 The fallibility of his characters makes one feel close to him. That frailty and aimlessness strikes a chord in any era, with any generation. Despite his starry appeal, Dev Anand’s persona never did overpower his early films. But later movies have, indisputably, been alarmingly bad. I haven’t watched any after Des Pardes (1978). A day after his death, every music store I visited in Delhi had a separate stack of his films to cater to the renewed demand. And 99 per cent were those black-and-white films. Dev Anand himself may not have liked revisiting them or discussing the past. He may have preferred to live in the present and the future. But it is someplace within his sepia yesterday and the shades of grey that his timelessness lies.