All round bad news shakes the economy, but a few still see a light 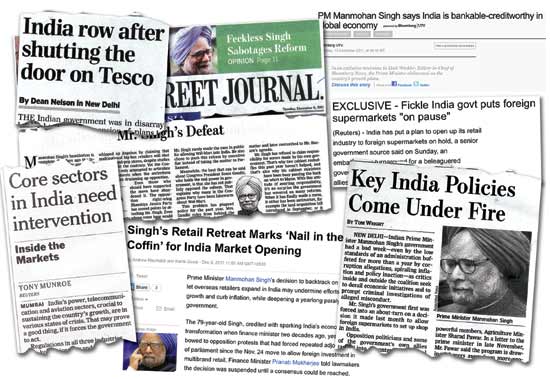 Given the waves of bad news about the Indian economy, a general gloom and doom has become the default mode. Few have been really upbeat about the economy and the business environment in India over the last year. But through all this pain—in the past few months, companies have slowed plans, analysts and rating agencies have been murderous in their assessment of India—one constant has kept everyone’s hopes up. At a time when the global economy is doing so poorly, surely India (its many problems notwithstanding) is a better place to be?

“India’s suffered a battering because government is so dysfunctional... global capital has become much more risk-averse.”
Devesh Kapur, University of Pennsylvania

Not exactly. Even the usual premise that India is still an attractive destination globally is now under attack. In the aftermath of the UPA’s double-quick backtracking on FDI in retail, not many are seeing India with rosy-tinted glasses. Led by the international media, a host of voices are putting India down globally (like Microsoft India head Bhaskar Pramanik’s comment that the country is “not a preferred destination for MNCs”). Then Moody’s recently downgraded Indian banks, a clear signal on the confidence front. This has even prompted Prime Minister Manmohan Singh to reach out to the international media.

Is all this just a temporary phase, or is global confidence in India gradually waning? One view (in the ascendant) is that investors are thinking twice about their India plans—a clear warning. “Investors abroad see India as a high-inflation and slowing-growth economy. They see little hope of dynamism in the Indian economy returning,” says economist Lord Meghnad Desai. “They (foreign investors) will go elsewhere where the prospects are much better. India’s image as a miracle economy will take some years to regain its spot.”

Globally, risk-averse investors are staying in safe zones while the Euro crisis plays out. This means investments into India have been falling. While FDI inflows have increased, FII inflows were significantly low at just $0.6 billion from April-Oct 14 this year as against $27.5 billion in the same period in 2010-11. Says Devesh Kapur, director, CASI, University of Pennsylvania, “Yes, India’s reputation has suffered a battering because government has become so dysfunctional and corruption so intense and pervasive...moreover, global capital has become much more risk-averse.”

The pressures are showing on India’s showcase IT sector. There have been reports in the recent past that the Philippines has overtaken India as the most favoured BPO destination. Clearly, these are warning bells for a country that still holds 55-60 per cent of the global outsourcing market. “While business is coming to India, it is getting more tough. The policy bottlenecks are creating a reputation risk for us,” avers Nasscom president Som Mittal.

“Rising inflation, the fiscal deficit and an impression of policy paralysis have all helped tarnish the image of India outside.”
Simon Denyer, Washington Post

The international media has been particularly scathing in its criticism of India’s failure to address key economic issues. As a critical piece on the Economist website noted, “Once conviction in the destination falters, companies curb investment and hope turns to fear that the country’s problems may be intractable.” Simon Denyer, India bureau chief of the Washington Post, told Outlook, “Rising inflation, the fiscal deficit and the impression of policy paralysis have all helped to tarnish the image of India among foreign investors to an extent. Plenty of Indians are wondering about the strength of the current leadership and I imagine foreigners are asking themselves exactly the same questions.”

Of course, the recent spate of corruption scams has not helped matters. Says Manjeet Kripalani, executive director, Gateway House, a policy think-tank in Mumbai, “The developed economies of the West are actively cleaning up their systems. We, on the other hand, are falling deeper into the pit of irrelevance, and are at the point where we have nothing to offer in terms of investment—not even our vaunted large market.”

Foreign investors have also been more questioning. “In terms of cost of business, investors will question India’s viability,” says Anirudha Dutta, head, thematic research, CLSA Asia-Pacific markets. He feels on a macro-basis, India fares as well as any other Asian country, barring a few sectors. “Our real problem is implementation of the law. Without investments, it’s going to be difficult to look at growth in core sectors like power, infrastructure and so on,” warns Datta.

“The structural conditions that prop up Indian growth will also help it recover some time in the next fiscal year.”
Atsi Sheth, Moody’s

Is it all bad news then? Experts feel the pressures of high expectations drive the despair. As very few economies are performing well globally, expectations from India have soared. So any minor dip in economic performance is being viewed as a major disaster. Says D.K. Joshi, chief economist, CRISIL, “India’s growth is good (compared with many in the West)...that said, the benchmark for India is also very high. The world expects India to grow at 8-9 per cent, and this expectation is being belied... that explains why the outlook on India has changed in the past few quarters.”

Raman Roy, chairman, Quattro Global Services, also feels there is an unnecessary rush to go hit bottom. As he puts it, “Other economies are ‘de-growing’. If we grow at 7 per cent in today’s global economic environment, it’s very good growth. Nothing has happened in the last one year to make the business climate any difficult here.” The economy is also expected to improve, as the current downturn is seen as being cyclical. Says Atsi Sheth, vice-president/senior analyst, Moody’s, “The structural conditions that support Indian growth—such as a high savings rate, a reliable domestic demand base and rising private sector competitiveness—should help growth recover some time in the next fiscal year.”

Overall the global view on India remains positive (with riders). Prof Jack Goldstone, who teaches public policy at George Mason University in the US, feels that India’s growth will be limited by poor infrastructure, corruption and inequality, but it will still remain one of the world’s most dynamic economies in the coming decades. “I expect India to grow more rapidly than China,” he says. Perhaps. But for now, there’s a warning: don’t take fairytale endings for granted.

It’s A Job Well Done When The Mind Is Blowing