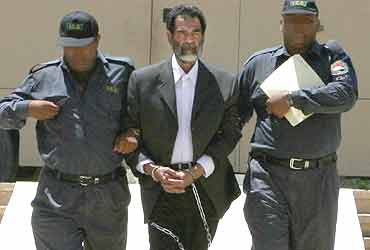 outlookindia.com
-0001-11-30T00:00:00+0553
For Iraqis, Saddam Hussein’s silence was deafening. Clustered around television screens from Mosul to Basra, the country had ground to a halt, anxiously awaiting to hear their former leader. They waited. And waited. And waited. And when the fateful TV images finally flashed up more than two hours after the top-secret court appearance was over, Iraqi viewers were dismayed that they came without sound. Saddam’s face was clear for all to see. But his voice was removed, thanks to the editing efforts of the US military censors.

Answering for the first time in the role of defendant, Saddam’s July 1 arraignment was meant to be a watershed moment in Iraqi history, comparable only to the fall of his statue in central Baghdad and his subsequent capture last December. The court appearance was expected to complete a trio of images that would serve as psychological stepping-stones on the nation’s tortuous journey from an even more tortuous past. But as the afternoon unfolded in a confounding flurry of pictures without sound, the Iraqi reaction was clear: the journey cannot take place without the voice of Saddam Hussein.

"Why does he have no voice? We want to hear him speak, to see what excuses he gives for these crimes," said a frustrated Hussein Sabieh, 30, a currency exchange manager, as he watched the court coverage at his office in Baghdad’s upscale Karada neighbourhood. 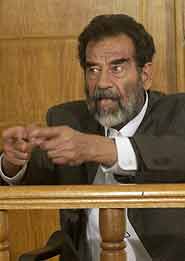 Other Baghdadis expressed doubts on both the timing and the potential for a proper trial. "How can we know if this will be fair? America controls the process, so we must wait and see," said Yassim Farouk, 28, an air-conditioning serviceman. "We do want him judged in Iraq, but maybe it is too soon. Better that we wait for an elected government. This government should worry about fixing the security problems, the electricity problems, the unemployment."

In a nearby electronics shop, a cluster of men crowded around the television were unable to prise themselves from the sight of the former president. "I prefer we execute him right now and never see him again," said Abdul Rahman Daoud, 26. But Daoud was corrected by an older man in the circle, Sahab Salim, 38, who announced, "We must see and hear every word. I want to make my own opinion based on knowing everything."

A family of Christian Kurds taking refuge from the heat inside an air-conditioned shoe store expressed a confused blend of satisfaction and disappointment. "We want Saddam executed because of the past, and because of the terrible security situation that has followed him," said Or Yakoub, 54, pointing to her teenage daughter, adding: "She survived a kidnapping attempt one week ago. But many Iraqis are disappointed at what they see. He seems so weak, after showing so much strength as president. Now we have no respect for him. He gave up and lost everything." Store manager Laith Juma, 35, chimed in: "I am relieved, even if the trial will not be so fair. But I am also worried these legal actions will make things worse. What if Saddam’s supporters and other terrorists start to increase the attacks?" 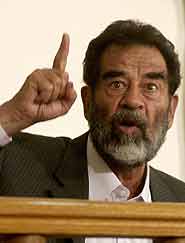 By evening, Iraqis and the outside world were able to piece together at least some of what Saddam had said in court. A partial audio track was rescued and circulated, having been beamed direct to satellite by one of the handful of media cameras allowed in the courtroom without the knowledge of US army censors.

But the damage was already done. In the days to follow, even the most stalwart defenders of Iraq’s emerging interim government acknowledged the ironic blunder: their first great act of freedom and democracy involved the muzzling of the former leader. "It was a mistake. We should have allowed him to say whatever he wanted," interim government spokesman George Sada said in an interview". The impulse to take his voice away was wrong."

The dimensions of the irony were greater still given the location of the trial.Saddam’s shambolic encounter with the new Iraqi justice happened in a small outbuilding adjacent to the former leader’s Radwaniya Palace, a sprawling island redoubt surrounded on three sides by a man-made lake that earlier served as his private fishing retreat. Today, it’s the site of Camp Victory, one of the largest overseas US army bases built since Vietnam. Here, thousands of 1st Cavalry Division soldiers live in a sprawling dustbowl trailer park, taking shelter from Baghdad’s infamous 50° C summers in air-conditioned bunks. The fat carp and small-mouth bass that occupy Radwaniya’s warren of lakes and canals are now the sport of off-duty US troops. 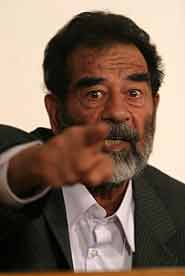 Such scenes only heighten the profound sense of humiliation Iraqis and the broader Arab world feel after 15 months of military strangers in their midst. "Saddam may have been bad for us, but he also knew how to maintain order," said Tariq al-Rubaie, a salesman with Baghdad’s new Iraqna mobile phone service. "If he were back with us today, Saddam would know how to bring us security within a week. The attacks would end, the electricity would return, the petrol lineups would end. We hate the Americans now, because they have done nothing."

In his court appearance, Saddam seemed almost to reflect those conflicting emotions. By turns downcast and defiant, the former dictator was neither the West-baiting lion of old, nor the dishevelled mess that emerged seven months ago from a hole near the banks of the Tigris. Something between those extremes was the Saddam who appeared for the first time in the role as defendant. Which Saddam will appear next—and whether he will appear again anytime soon—remains an open question as Iraqi authorities and the former leader’s burgeoning international legal defence team mull their next moves.

Now numbering 21 lawyers and counting, Saddam’s legal team howled in protest after its client was arraigned in Baghdad without so much as a single lawyer to represent him. The perceptions of unfairness proved a windfall, however, with a variety of sources across the Arab world showering the defence with "diverse aid and diverse gifts", according to French legalist Emmanuel Ludot, one of the team members. Among the new supporters is Aicha Muammar Gaddafi, daughter of Libyan leader Muammar Gaddafi, who has pledged "to provide her logistic and financial aid", Ludot said. "It’s Libyan money. It’s welcome."

In a region where the idea of leaders being held accountable for their actions remains revolutionary, it was expected that Arab regimes would rally in defence of a fellow leader accused, among other things, of violently suppressing revolt.

But the theory does nothing to explain the broader expressions of anger against the trial process playing out both inside Iraq and elsewhere on the Arab street, where many agree with Saddam’s most cutting remark during his brief 23-minute appearance. "This is all a theatre. Bush is the real criminal. It is for his re-election," Saddam sneered at the trial judge.

With a continuing security crisis on the ground and a groundswell of legal support building behind Saddam, one highly-placed source with the interim Iraqi government said they were in no hurry to push for the next legal encounter with the former leader. "It may have been messy, but it’s over for now. Saddam is a problem that is behind us. And we don’t want to bring him up again until the government is much, much stronger," he said.