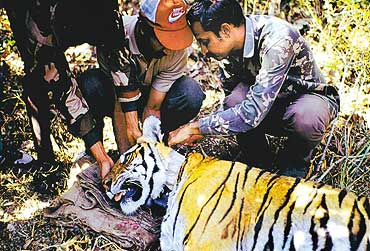 His crime? Scientific certainty. "We documented the loss of nine breeding tigers, almost the entire breeding population of Panna, plus 21 young adult tigers," he says. His misdemeanour? "Showing this evidence to the director, Project Tiger." The result? Official action, not against poachers, but against the scientist. Chundawat's research vehicle and radio-telemetry equipment were seized (then returned). A case for recovering Rs 1,80,000 as elephant hire charges was filed with three-year retrospective effect. This, despite a fee waiver in writing. Then, he was implicated in an inquiry against a BBC crew for night filming, "though we were accompanied by officials," says Chundawat. Not only that, he is also barred from the high tables of policymaking. "These cases were used to discredit and prevent his inclusion in a nodal national wildlife committee," says a senior government source.

Chundawat's is not an extreme example. Nor is it isolated. It's just the system striking back at researchers who expose bureaucratic corruption, mismanagement and the nexus between officials and poachers and timber and mining mafias.