That Gleeful Snuffle In The Grass

The pygmy hog was nearly extinct. But with a few committed humans, its fight for survival is on. 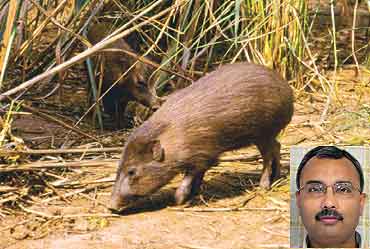 outlookindia.com
-0001-11-30T00:00:00+05:53
They’ve got no squiggly tails, they’ve won no formidable fame like other wild pigs. They’re just plain-looking pigs, rarely seen, even in the wild. Yet, Dr Goutam Narayan has dedicated himself to saving the pygmy hog, the smallest and rarest suid (wild pig) in the world. Standing just 12 inches off the ground, this petite pig was once found throughout the wet riverine grasslands that stretched from Uttar Pradesh to the Northeast. And then later thought to have been extinct. Until it was rediscovered in 1971. Today, with only a few 100 left in the wild, this hog’s future is doomed once again. It’s listed as "critically endangered" by the World Conservation Union (IUCN).

All hope is focused on the Pygmy Hog Conservation Breeding Programme, initiated by Narayan just outside Guwahati in Assam. Created in 1996 with six wild hogs, today it has 74 of them residing in its recreated grasslands, housed in family groups. Human habituation is kept to the minimum. And all efforts are made to duplicate nature; their food of succulents, tubers and grasses is hidden—so they can forage as is their habit.

Narayan, a senior wildlife biologist who’d earlier worked on the Bombay Natural History Society endangered species project in the Northeast, says: "Small taxa like the pygmy hogs are sensitive indicator species whose existence is directly related to habitat protection. If we save the pygmy hog, we will also be saving the grasslands." This small pig requires a diversity of grasses. The current practice of grass-burning that prevails in these parts endangers the special home of the pygmy hog. Which is why this conservation programme will lead to protection of the grasslands—a highly specialised, little understood and threatened ecosystem.

After the extraordinary success in raising 74 hogs, Narayan and his team—a wildlife veterinarian and four keepers—are getting ready for new arrivals. Three females are pregnant, the litter might be 4-5 piglets each, of which 3-4 usually survive. These piglets and their mothers will be transferred to a pre-release site and raised without human contact to prepare them for the next stage: reintroduction into the wild, in Assam’s Sonai Rupai Wildlife Sanctuary.

Assam’s Manas Tiger Reserve currently houses the last wild population of pygmy hogs. This UNESCO World Heritage Site (in danger now) is the single most important site for the survival of this species and others like the hispid hare, golden langur and highly threatened birds like the Bengal florican.

Partnering Narayan in this not-for-profit mission are: the Durrell Wildlife Conservation Trust founded by author and naturalist Gerald Durrell. Since 1963, this trust has been saving lesser-known animals from extinction like the pink pigeon and kestrel in Mauritius and lemurs in Madagascar. Other partners include the IUCN’s Pigs, Peccaries and Hippos Specialist Group, the Union ministry of environment and forests and the Assam forest department.

To ensure the survival of the species, which reappeared from the brink of extinction, Narayan hopes to create at least two more captive populations and to restore them to the wild. Funds, even those coming in from the Durrell Trust, are already strained and more will be required to sustain this long-term project. The crying need is also for people to understand grassland ecology so that the Northeast may once again echo with sounds of these snufflers in the wild.

What It'll Cost U