Great trip down grouse avenue. Now to get back to saddi Dilli 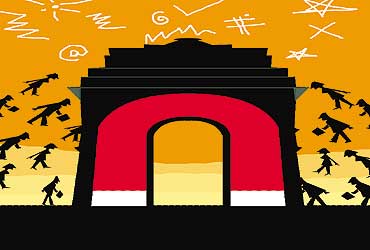 outlookindia.com
-0001-11-30T00:00:00+0553
So, the verdict is out. The jury has spoken. Delhi sucks, big time. As an unrepentant denizen (born and raised) of this dusty and landlocked dystopia, I am hugely relieved. Now the Republic of India can pack up and leave, and let us uncouth Delhiwallahs be, so that we can begin to hatch devious plots to revive the Delhi Sultanate as an autonomous Central Asian city state with closer ties to people in Peshawar, Ashqabad, Tabriz and Istanbul than to the worthies of coastal and not-so-coastal Indian cities that are more cultured than our own phati-puraani, and jaani-come-lately Delhi.

Then, when our great Indian luminaries come visiting from Calcutta, Mumbai, Chennai and other great Indian cities that reinvent themselves by adding and dropping the odd consonant, we will treat them with the honour they rightly deserve as esteemed foreign guests. All visiting Indian dignitaries will be confined in the India Habitat Centre which will double as the new Indian Embassy to the Delhi Sultanate. They will be kept there for their own protection, so as to ensure that they do not have to come into contact with the marauding hordes of Delhi. And we will insist that their stay be sweet, but short.

Our shameless hussy of a metropolis can now go back to being the secretly interesting, warm, generous, hospitable, intellectually stimulating and lively city to live in that she is. Not because of the mai-baap sarkar that rules the place, but because of the common solidarities that tie people in a city that belongs, essentially, to no one in particular and everyone in general. We may be obsequious subjects of the Government of India, but we are also raucous, rambunctious, free-thinking citizens of an unruly world.

No, seriously, I know that living in Delhi is not exactly like sojourning in paradise (regardless of Persian couplets to the contrary). Nor am I denying the existence of a culture of everyday violence, misogyny, racism, caste privilege and the worship of power—all of which Delhi has inherited in fair measure from the high mainstream of Indian civilisation. And I won't even go into how hot, how cold, how dusty, how arid Delhi can be. This city is bad for your skin, but perversely, it gets under your skin and stays there.

After all, if life here is so horrible, then why do more than 14 million people insist on staying here, many of them braving the wrath of the courts hell-bent on destroying their habitations? Why do more people keep coming, voting with their feet, not only from the great hinterland of India, but also from Bangladesh, Nepal, Afghanistan, from Siberia and Burma, to seek their fortunes, to wrest out solace, friendship, solidarity, even love, from this city everyone loves to curse?

Why do entrepreneurs from Patna, Pataldanga and Panipat flock to Delhi with dreams of fortune? Why do the most interesting conversations that I have only occur in Delhi? Why does Delhi have more young and emerging artists, documentary filmmakers, writers and poets than Mumbai, Calcutta and Bangalore put together? Why are so many of the people who are forging a new history, a new social science, a new literature (and not just in English and Hindi, but also in Malayalam, Assamese, Urdu, Manipuri and Bangla) to be found animatedly talking to each other in smoke-filled Delhi barsaatis and apartments far across the Yamuna? Why is Delhi the destination of the young critical mind tired of the certainties of College Street Calcutta, or Kala Ghoda Mumbai? Why is the queer scene so lively in Delhi, and so tame, elsewhere? Why are there spaces in Delhi, in hidden-away basements and in the back streets of lal dora villages, where, unbeknownst to the hierophants of Indian culture, a new, edgy, contemporary sensibility is emerging, day by day?

Perhaps, the very aridity of Delhi might have something to do with all this. We have no great legacies of civic modernity to fall back on. No coffee house culture, no traditions of industry, no established patterns of anti-establishment posturing, no nothing. We're a city of refugees and refusees, with nothing to our name other than a vague idea of medieval greatness we had nothing to do with. All we have is a bootstrap ethic the Punjabi post-partition refugees used to build a new city in the face of state apathy. That's why we don't wait for things to happen, we don't bemoan the absence, loss or decline of culture, of institutions and journals, we make them happen. And we don't really care if Shobhaa De, Gerson da Cunha, Girish Kasaravalli or Amit Chaudhury don't really know this.

Manjula Padmanabhan was on the right track when she speculated on what Delhi would be if the city were a person. She just mistook the city's gender. Delhi is a Punjabi woman, smart as hell and tough as nails, foul-mouthed and sexy, generous, loving, unsentimental, capricious. This is as good as she gets, and that is why I'd never refuse her hospitality.

(Sengupta is Fellow at the Sarai Programme of CSDS, Delhi.)