Home  »  Magazine  »  Sports  » Interviews  » interview »  ‘Tests Are Difficult, Everyone Cannot Be Successful In Them’

‘Tests Are Difficult, Everyone Cannot Be Successful In Them’

Fresh after his 293 at Mumbai, Virender Sehwag speaks on Indian team, Test Cricket and much else 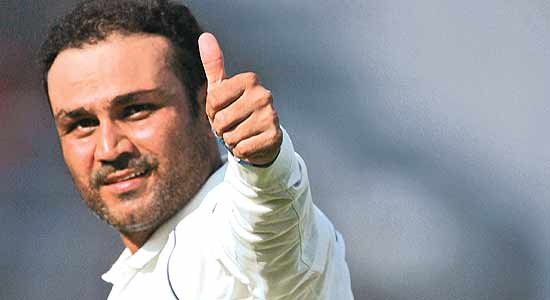 Rohit Mahajan December 21, 2009 00:00 IST ‘Tests Are Difficult, Everyone Cannot Be Successful In Them’

Was it encouraging to be able to play in your normal style in Tests after recovering from shoulder injury?

I wasn’t worried about my batting due to the injury. I’ve always played like I did in Mumbai. In Australia, I once made 195 runs in a day, 228 in Pakistan. I was able to utilise the Mumbai wicket, which was good for batting. I want to put on record my debt to physios Paul Close and Nitin Patel and masseur Mane Kaka—they’ve worked very hard to help me recover.

How come you play so many shots and yet manage to bat for so long?

I pick the bowlers to attack, I choose what strokes to play on different tracks, against different fields. When you see the field, you know what line and length to expect. The bowler may then err, or try to surprise you. You have to hit the bad balls, and also try to counter his strategy. I believe the more you stay on strike against one bowler, the greater is the chance for him to dismiss you. So I try to hit a bad ball for a four and then rotate the strike.

It’s said there’s no confusion in your mind about what to do when the ball leaves the bowler’s hand.

You must have the belief that you can get runs anywhere in the world. The most important thing about my batting is that if I’m beaten by a ball or there has been an appeal, I’m able to forget that. If the next ball is in the slot to be hit, I’ll hit it. I don’t worry about what’s past—I think it’s a big strength. Likewise, if I’ve played a big shot, there won’t be a rush of blood.

"In the last two years, batsmen have got runs, bowlers taken 20 wickets. That did not always happen in the past."

With your game, does it surprise you that your record in Tests is much better than in One-Day Internationals?

In ODI cricket, I’m a bit too positive and aggressive—I’m trying to restrain myself and play longer innings in ODIs.

And T20? You say you’d like to play Tests if you were forced to select only one format to play.

T20 is a fun format. You can’t expect a batsman to definitely get the runs....you enjoy the game, it’s fun for players and spectators. In Test cricket, the bowler will test your technique, your character. You have to bat or bowl all day. Tests are difficult, not everyone can be successful in them; anyone can get runs on a given day in T20.

What has been India’s journey like in becoming No. 1 in Test cricket?

This process began two years ago, when Anil Kumble took over as captain. We won the Perth Test in early 2008—when Gary Kirsten joined us as coach—and that gave us great belief, that we can beat anyone anywhere. The batsmen have scored, the bowlers have taken 20 wickets—this hasn’t always happened in the past. That’s why we’ve lost only one series in the last 18 months. It’s a great bunch, we’re happy at each other’s success.

We started winning abroad more regularly earlier in this decade.

That habit started under Sourav Ganguly, who must be credited for picking match-winners, motivating them.

But we’ve not won in Australia and South Africa....

We haven’t, but we had a chance the last time (2008) in Australia. If things had gone in our favour in Sydney, we could have won the series. Anyway, the challenge now is to remain No. 1, to try to win series in Australia and South Africa.

Gautam Gambhir has been a revelation to all.

Most people say you are!

Gautam has so much talent! If he plays for another 10 years, he can give great performances and break many records. He can get 20 runs in 10 balls in T20, can score at a run a ball in ODIs, and in Tests he can bat all day. He’s batted for 10 hours in New Zealand—we in the dressing room said that after Rahul Dravid, we’ve got another wall! He’s mentally very tough, he has this hunger to do better.