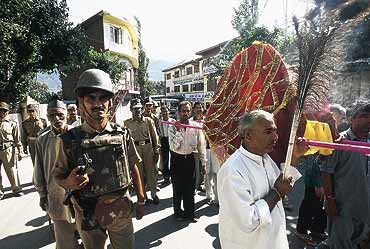 outlookindia.com
-0001-11-30T00:00:00+0553
Narender Singh, a self-styled vet from Atholi village in Kishtwar, has been having sleepless nights for the last week. He is one of the two lucky survivors of the Sharote dhar massacre, where militants mowed down 15 shepherds on the night of August 4. This was the fortnight's second such incident in Doda district and the third in the state where militants had resorted to selective killings. Altogether, 40 Hindus died in the bloodbath.

"They (the militants) closed the door, lined us up in a single row and fired at will," recalls Narender, with a shudder. He fell among the heap of bodies, purely in fright, not realising a bullet had only grazed his hip. Thereafter, he feigned death.

It was not till five hours later that he gathered courage to begin the arduous six-hour trek to Atholi to break the news. "On reaching, I fell down unconscious," says Narender. It took the security personnel a full 13 hours to bring the bodies down to Atholi.

Sharote dhar, like many of the remote hamlets in the district, depends largely on livestock and the single annual maize crop to survive. During winter, most of the Bakerwals (shepherds) and Gujjars who stay in dhoks or high-altitude shelters, come down to the villages, often looking for menial labour. "Gujjars are often looked upon suspiciously as many feel they harbour militants and are informers," says a senior police official in Doda.

Such tension is palpable across villages, as distrust and wariness between communities mount. It became evident even as the bodies of the Sharote dhar victims were being cremated in Atholi. bjp activists, who had gathered in strength, giving vent to their anger, burnt two shops owned by Muslims, attacked houses and even fired upon a mosque. "Why should we bear the brunt of this anger?" asks a helpless Majid Khan, a vendor in Atholi. "We're not at fault." Timely intervention by the police prevented the situation from getting out of hand. All shops and commercial establishments in Doda and Kishtwar towns immediately downed shutters. Curfew was imposed.

It's a fate Doda seems to be fast getting accustomed to. A picturesque district lying between the lofty Pir Panjal and the beauteous Dhauladhar range—cutting west through east across the state—Doda has exploded with an unprecedented burst of militant activity, the latest being the attack on five Hindus on Independence Day. The objective seems clear: create fear and then a migration.

And given Doda's demographic profile (58 per cent Muslims and 42 per cent Hindus), it seems ideal ground for militants to engender animosity amongst the communities. "They use soft targets like these to let loose mayhem," says Kishtwar's Superintendent of Police, Viplav Kumar. But it's to the villagers' credit that there is no polarisation yet. "We know the real motive behind these attacks," says Balraj Parihar, a farmer from Atholi. "But we have stuck on." Adds Mohammed Akbar Kitchoo of Doda: "Even during the worst days of militancy in the mid-'90s, such selective killings occurred but there has been no local flare-up."

But for how long? The sheer ruggedness of the terrain gives militants a free run of the area. Communication facilities are non-existent in these remote areas. Dirt-tracks and poorly-maintained roads make travel a nightmare. Many of the villages are only approachable through mountain paths crossing steep ridges. "Almost 75 per cent of the population in Doda district lives in such areas...very few stay in the towns," says Janak Lal, a shepherd. "So when an incident happens, it sometimes takes a full day before the state apparatus and security forces can react," says a district administration official.

In such a scenario, deployment of more battalions in the higher reaches is of hardly any help as the terrain just soaks up the extra manpower. Some of the militant strongholds in the upper reaches of Wadwan, Marmat, Kucchan, Dessa and Gandhobalesa, contiguous to the Valley, are simply beyond the army's reach. Besides, the militants keep changing sectors from Kupwara to Doda, and are constantly on the move, making the army's task that much more difficult. "We know we have a tough task on hand. Let's see how far we can go," says a colonel in Atholi.

Even the Village Defence Committees (vdcs), set up by the state government some years back to protect those living in the distant outbacks, has failed to inspire confidence. Roughly 900 people are on government support in Doda district, provided with outdated .303 rifles and a paltry sum of Rs 1,500 every month. And aware that vdc members are singled out by militants in most incidents, there aren't even many takers for the job.

In Atholi for instance, vdc commander Naib Chand is 62 years of age and can barely hold his rifle. "I have not learnt to fire," he admits. Others in the village jokingly remark that vdc members would be hard put to save themselves in the event of an attack, leave alone anyone else.

Nor has the government's proposal to include Muslims in the vdcs elicited any response. "We are reluctant to join these vdcs as we too will come under attack," says Jamaluddin, a shopkeeper in Gulabgarh, Kishtwar. The Central government's alternative idea to set up defence dhok committees is also likely to meet the same fate, as the Gujjars—all Muslims—field the same argument as other Muslims.

Also of little help is the Centre's declaring the six districts of Jammu province, including Doda, as disturbed areas and giving army special powers to search, detain and arrest. This, many feel, will only lead to further harassment. "We fear these fanatical elements in political parties will help security forces target our houses just to trouble us," says a worried Jameel Ahmed, a local from Atholi. Adds Khursheed Ahmed of Kishtwar: "If they (the security forces) don't catch the militants, they will trouble us. Then, we have little option. Either fall back on the civil administration or leave our homes."

"But where do we go? Sure, we are scared and fear for our lives," says Manjiri Rani, a villager from Gulabgarh. Adds her husband, Balraj: "Who knows what will happen if this madness continues?"

A ham-handed approach to the problem may only exacerbate the communal tensions that threaten to rip the district apart. The greater need now is a political initiative which will stifle communal antagonisms and bridge the divide between the two communities. Declaring Doda a disturbed area is no solution for militancy, feel most people. "Thoughtless combing operations and harassment of innocents, which is bound to happen, can only prove counter-productive," says Saidullah Tantray of the j&k Freedom Movement. They can only be a prelude to it becoming a militants' or a bigots' paradise.