Chet from America wrote: "Shame on you and all of India." My reply to him is: "You have done well to leave a country you are ashamed of." 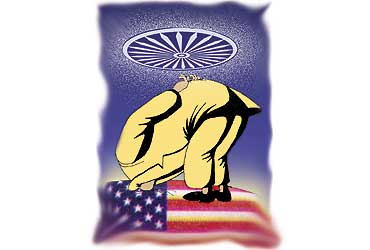 Hi Madhu,
I have read your articles ever since I was a kid and you were at India Today. You have often come across as a balanced person not prone to the Gandhi nonsense, until now.

I live in a White nation (the US) and have never felt like a second-class citizen. Only a blind and deaf person can compare the pride of a US citizen with the indignity of being Indian. A US citizen trusts his government, knows his/her death will never go unpunished, while an Indian soldier is there to die.

Elite is a bad word in India because 95 per cent of our country lives in abject poverty. Next time ask the waiter in Taj, who serves you the INR 400 drink, how much he makes in a month?

The durban who opens the car door for you to get in...asks him how much he makes? I bet his monthly salary will be around your one night's drink and dinner bill. Shame on you and journalists like you who have failed India in the past with coloured reporting and are doing so now. Indians should not feel proud about India. They should feel ashamed. Rather than call Bush names, maybe we should hang our heads in shame on PMs like Vajpayee who is too old to walk, too much of a coward to protect his people.

Maybe, just maybe, the day people like us (the English educated hence smarter) start feeling ashamed enough we will start making changes in India rather than just exploiting our servants and labour class. It anguishes me to read these national character articles. A nation that cannot feed its people (a la Orissa) has no character, a nation whose children run around naked (Mumbai) has no reason to feel proud, a nation whose elected reps call religious riots 'opposite reaction' has no future.

Once again, shame on you and all of India. I am ashamed to be an Indian and shame on you for sugg-esting anything else.

I will answer your letter point by point.

(The author can be contacted at madhutee@yahoo.com.)

Dissimulation In Words And In Images