An excess of engineering colleges, but few students 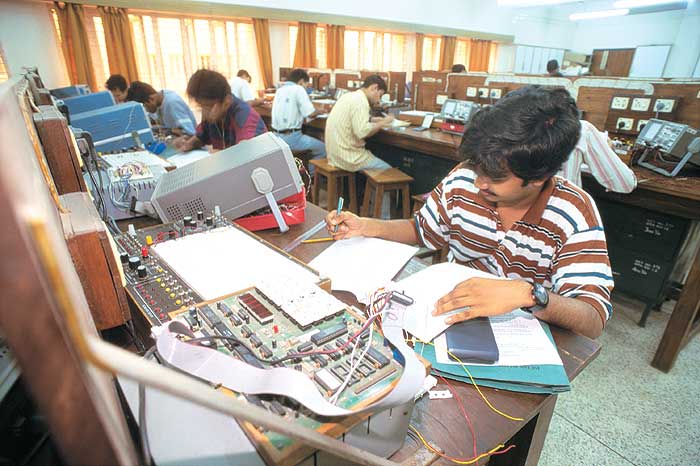 Is the engineering bubble of Andhra Pradesh on the verge of bursting? Admissions into colleges across the state have fallen this year to an all-time low, sparking off debate that the state’s engineering dream is not all that it is made out to be. Many who have cleared the Engineering & Medical Common Entrance Test (EAMCET) are giving colleges a wide berth this year.

Andhra Pradesh has 697 engineering colleges, the most among all states, and over 1.83 lakh seats in all. This year, nearly 1.5 lakh students were allotted seats, but only 54,000 have enrolled. One reason, officials say, is the prolonged Telangana stir. Parents are anxious about the future of their wards: last year, the stir led to the frequent postponement of exams. One parent whose son secured admission to the Chaitanya Bharati Institute of Technology (CBIT), Hyderabad, sent him to a Coimbatore college as a faculty member at CBIT advised him to do so. “Even the teachers are unsure about study schedules and campus placements, given the political uncertainty,” he said.

N.V. Ramana Rao, principal of Jawaharlal Nehru Technological Institute, Hyderabad, and convenor for the EAMCET, says the reason for vacant seats is simple. “Supply is more than demand because AICTE has been sanctioning new colleges despite us requesting them to be a little more cautious. More colleges have meant more seats and more vacancies,” says Rao.

The other reason for students preferring other states is the delayed admission process. “The intermediate exam results were delayed because of the supplementary and advanced supplementary exams. Parents, meanwhile, were anxious to admit their children to some college. Hence, many preferred to pay for seats in other states under the management quota rather than wait in Andhra,” says Rao.

Minister for higher education D. Sridhar Babu admits that there is a fall in engineering admissions this year shrugs it off, saying, “It’s a free world and students can seek admissions to whichever college they prefer.” Sridhar Babu attributes the trend to a growing interest in traditional graduation disciplines like BA and BCom, while admitting that the infrastructure in some engineering colleges is indeed indadequate.

Dr M.D. Christopher, secretary of the Andhra Pradesh State Council of Higher Education (APSCHE), says poor quality of faculty is a cause for concern. “Each engineering college department requires three professors with PhDs. A college with four disciplines will need 12 of them. This is not happening. If one were to go strictly by AICTE regulations, a majority of the engineering colleges here will have to be shut down,” he says. He cites the Nasscom report, which says the country’s average employability of engineering graduates is just 25 per cent, but in Andhra it’s less than 10 per cent. “This means that out of the 2.7 lakh students we have, only 27,000 can get decent jobs. The rest will be underemployed or unemployed—a serious concern,” he says.

Bodla Seshnag, a student who secured admission into a Warangal engineering college, says many of his friends have opted for management quota seats at colleges in Chennai, Manipal and Coimbatore. “Here, we find even fresh BTech graduates teaching  in so-called premier institutes—scary indeed,” he says.

Surprisingly, this trend has begun despite the state government bearing the tuition fee of students whose parents’ annual income is less than Rs 1 lakh under its fee reimbursal scheme. Quantity has defeated quality.