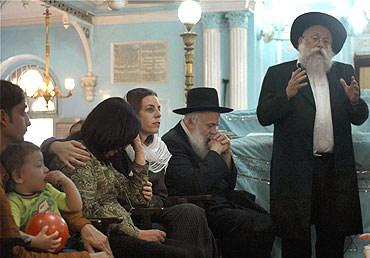 For two millennia, they faced persecution everywhere. Everywhere but here in India, where for the first time in their painful history, the Jews found a place where they felt safe, a multicultural society in which they were at home. But not any more. Not since that fateful Wednesday, November 26, when two terrorists entered Nariman House—a dilapidated, white, five-storey structure in south Bombay's Colaba area—that housed a Jewish spiritual centre known to the city's Jewish community as Chabad House. By the time the hostage drama ended 48 hours later, Rabbi Gavriel Holtzberg who ran the centre, his wife Rivkah and four other Jews staying there were dead. The only ones to emerge alive were the rabbi's two-year-old son Moshe and his Indian nanny, Sandra Samuel, who saved his life.

The fact that Jews were specially targeted by the terrorists—of the 22 foreigners killed during the siege of Bombay, eight were Jews—was a message not lost on India's 4,480 Jews, 80 per cent of whom live in Bombay.

The majority of Bombay's Jews are Bene Israelis who, according to legend, were shipwrecked off the Konkan coast 2,000 years ago, and went on to adopt typically Konkan livelihoods like oil-pressing, and even Maharashtrian family names. Many of them moved to Bombay as the city grew into a bustling trading centre, and six of the eight synagogues in the city were built by them. Cochin and Calcutta were other cities with significant Jewish communities. Indian Jews, from Bombay as well as other cities, have distinguished themselves in various professions—law, medicine, engineering, civil service, business, IT, the armed forces, cinema.

Bombay's Jewish community, like those in other Indian cities, has shrunk greatly since 1948—some 60,000 Indian Jews are believed to have emigrated to Israel over the past six decades—but they have left their unique imprint on the city and its signature landmarks, like Flora Fountain.

"This is the only country where we escaped persecution of any sort, but now there is a sense of fear among us," says author Esther David. "We've been brought up not to call attention to ourselves," she adds, "but now I'm cautious, scared and worried. Are we becoming more visible?"

Certainly there was nothing about Chabad House that screamed for attention. In '06, the Holtzbergs raised funds to buy it and set up the Mumbai headquarters for the Chabad Lubavitch movement of Hasidic Jews, a New York-based ultra-orthodox sect that runs Jewish spiritual centres all over the world.

When the Holtzbergs first arrived in Bombay in '03 with the purpose of serving the local Jewish community as well as visiting Jewish tourists and businesspeople, they found a well-established local Jewish community playing an active role in the city's vibrant culture. Apart from the Bene Israeli Jews, the Baghdadi Jews—Jewish merchants who fled deteriorating conditions in Iraq—had come to Bombay in the early 19th century, contributing much to how the city looks today. Commercial interests drew their leader David Sassoon to India in 1832. Sassoon, and his sons after him, built the David Sassoon Library, the Sassoon Docks, the Sassoon Mills, the Jacob Sassoon School and the grand Magen David and Knesset Eliahu synagogues, as well as Flora Fountain, named after David Sassoon's daughter-in-law. Although there are no Sassoons left in India, the very face of this city is a memorial to them.

For the Holtzbergs, though, it was not commercial interests but spiritual purpose that brought them here. The Chabad House had a small synagogue inside. In keeping with Chabad philosophy, the rabbi and his wife offered free kosher meals to visiting Jews of different nationalities. From Friday evening to Saturday evening, they came here to share the Sabbath meal. The house had a few guest rooms as well—it served as what local Jews call a "three-star ashram" for orthodox Jews visiting India, who found it difficult to observe Sabbath strictly if they stayed in a hotel.

Their generosity was initially misunderstood by the local media—early television reports suggested that the Holtzbergs were sheltering terrorists. Nothing could be further from the truth, or more ironic. "If a robber comes to your house and holds a gun to your head, you will definitely give him what he wants," fumes Ezra Moses, secretary, Gate of Heaven Synagogue, Thane district. "The rabbi had bought chicken and fruit from the market earlier that day, but it wasn't to feed the terrorists, it was to prepare the Sabbath meal. The Sabbath leftovers were always given to the poor outside Chabad House, Jewish or not."

Chabad House, Bombay's Jews contend, was attacked only because it was a soft target. "Only a coward would attack a place of worship of any religion," says solicitor Jonathan Solomon, chairman of the Indian Jewish Federation. "Anyone could have found their address on the Chabad website," says Sharon Galsurkar, a close friend of the Holtzbergs. "There was only a watchman with a stick in hand, so getting in would have been easy. There's anger now. You don't expect bad things to happen to good people."

Yes, there is anger and fear, but the Indian Jewish community is determined to show solidarity with other Indians at a time like this—joint mourning ceremonies are being planned. The Israeli consulate avers that there has been no sudden flow of Israeli tourists (some 55,000 visit India annually) desperate to catch the next flight out of Bombay.

Sagiv is particularly appreciative of the Indian government's sensitivity about Jewish concerns to keep the bodies recovered in Chabad House intact. "It is bad to do a postmortem on the body, even to take a blood sample. Every part of the body deserves a decent burial for the soul to be free," explains Moses.

The building that was home to the Holtzbergs in Bombay is now close to collapse. But what has been shaken, perhaps beyond repair, is the Indian Jewish community's hard-won sense of security. "We've been fortunate to have had the affection of both Hindus and Muslims," says Solomon. "When the Bene Israelis were taken captive by Tipu Sultan, his mother intervened and had them released. Now we find ourselves attacked by someone from outside India, who has no understanding of India or Indian values. It's nothing short of unnerving."