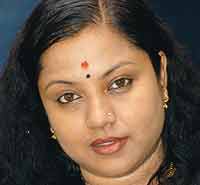 Can you tell us about your role?
I play a Muslim mother of three girls who's pregnant with her fourth child. Her husband leaves her after learning it's a girl again. The film is about raising the children and questioning the traditional laws of her community.

When do you plan a commercial release?
September. Theatres are not available in August.

You were pitted against Konkona, Rani and Aishwarya for the award.
They're all very glamourous and powerful actresses. I'm glad that me being a Kannada actress did not become an impediment.

You produced the film and got Girish Kasaravalli to direct it. Was it made for an award?
It was my dream to work with Kasaravalli.

Who picked the story for the film?
We looked around for nearly a year. Finally, Kasaravalli suggested the story of Haseena. I agreed.

What's your next venture?
I want to produce more films and want to get into direction two years later.

Your recent marriage has brought you luck?
I think so too. I got married in March to longtime friend and cameraman Venu.

Will this award give the much-needed fillip to the Kannada film industry?
The situation is gradually improving.