Tantric Rites In The Bed 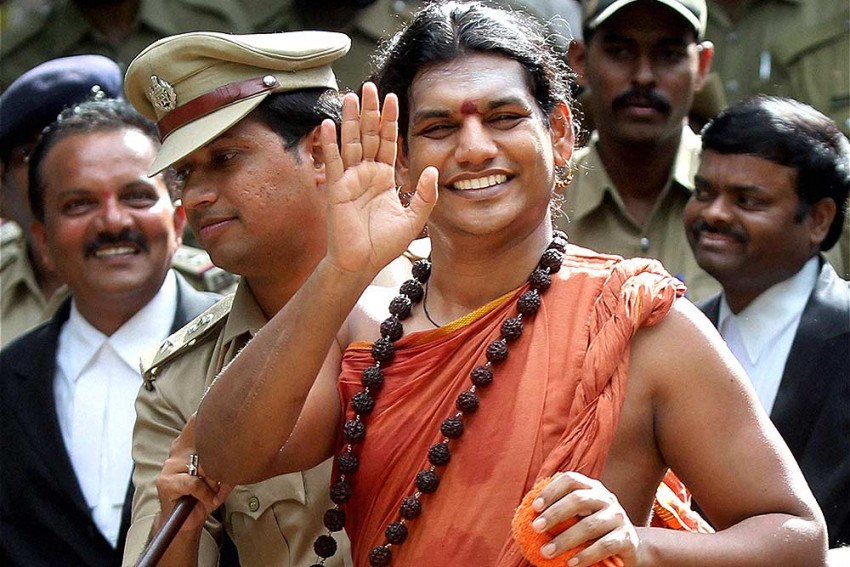 Nithyananda
Stripped Of His Halo A hidden video camera exposed the ‘swamiji’ as a sexual pervert. The godman has since been trying to fend off a flurry of charges against him.
Photograph by PTI
G.C. Shekhar August 31, 2017 00:00 IST Tantric Rites In The Bed 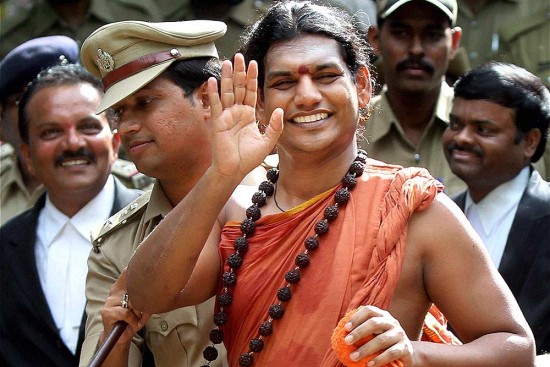 Say “Sex and the Swamiji” in Tamil Nadu and the first name that pops up is that of Nithyananda. A video footage of Nithi (nickname given by the Tamil media) gallivanting on the bed with a Tamil actress continues to be one of the most watched footages on YouTube even six years after it was first aired on television.

This tall, dusky young man—originally A. Rajasekharan, from the pilgrim town of Thiruvannamalai—could spellbind audiences with his fluent oratory on Hindu spirituality. It stayed, till he got undone by a hidden video camera. That plot by two of his own disillusioned followers stripped him of his halo and exposed him as a sexual pervert.

There were others too fed up with Nithyananda’s wayward and pretentious ways. Like, a mechanical engineer who used to work in the US and surrendered at the feet of Nithyananda in search of spiritual awakening. Now 42, she was repeatedly sexually assaulted by the swami. The godman brainwashed her into believing that she was only doing “guru seva” by subjecting herself to his carnal pleasures.

“He would sweet-talk me into submitting myself to him, saying that he was like Shiva and I his Parvati and that our union would do the world a lot of good,” recalls the victim. “If he could do this to an educated woman who has seen the outside world, imagine the way he would have exploi­ted others.” In her deposition to the Karnataka police, the woman lists exact dates and places from 2005 to 2009 when Nithyananda compelled her to have sex with him.

Nithyananda allegedly forced a devotee to abort after she had become pregnant from her husband, saying motherhood would check her ‘enlightenment’.

Getting whiff of the video recording with the actress, Nithyananda, in 2009, had the other victim and rest of the ashram inmates to sign pre-dated non-disclosure agreements (NDAs) under which the disciples are expected to have tantric sex. Page ten of the NDA states that as part of the “Learning from the Masterprogram volunteer understands that the Program may involve the learning and practice of ancient tantric secrets associated with male and female ecstasy, including the use of sexual energy for increased intimacy/spiritual conne­ction, pleasure, harmony, and freedom”. It further states these activities “could be physically and mentally challenging, and may involve nudity, access to visual images...and descriptions of nudity and sexual activity, close physical proximity and intimacy, verbal and written descriptions and audio sounds of a sexually oriented, and erotic nature, etc.”

The disciple also gets to absolve the teacher or the ashram of any wrongdoing they may be accused of with the following clause in the NDA: “By reading and signing this addendum, Volunteer irrevocably acknowledges that he/she is voluntarily giving his (sic) unconditional acceptance of such activities and discharges the Leader (Nithyananda) and the Foundation, and anyone else not specifically mentioned here but directly or indirectly involved in the organisation, management, or conduct of any such programs from any liability, direct or indirect, arising from such activities.”

“None of us was given an opportunity to read through the agreement,” recalls the engineer woman. Her deposition as a witness adds meat to the chargesheet based on the compla­int by K. Lenin, a key disciple of Nithi, who sent the video recording to Tamil Nadu and Karnataka police (and also the media) with a complaint on how the swami had misused his image and the ashram’s reach to cheat people in the name of religion.

“Though the chargesheet based on my complaint was filed in November 2010, Nithyananda used every trick to delay the trial,” notes Lenin. Eventually, following a Supreme Court dir­ective, Nithi underwent a test. A Bangalore hospital certified that he was not impotent and mentioned in its report that he did not cooperate when more tests were required, he adds.

Similarly, his voice sample was given only after the SC’s inter­vention and it was found to be “matching” with the phone conversation the godman had with Lenin. “In that phone call, he had pleaded with me to withdraw the complaint and had even justified his sexual escapades saying that late spiritualists like Ramakrishna, Vivekananda, Aurobindo and even Ramanar had female companions. The final chargesheet filed in 2015 said the two voices were a match. The trial has not progressed beyond the initial stages,” says Lenin.

To stop Lenin and the engineer woman from pursuing their cases, Nithi and his cohorts have filed at least 18 false cases against them across India and seven lawsuits in the US. They are forced to hop from court to court, seeking bail. Even as the rape and abduction case against him was pending in Karna­taka, Nithyananda got himself appointed as 293rd pontiff of the Madurai Adheenam, a 1,500-year-old math, in April 2012. After protests from the public and the state’s own HR and CE department, he was removed from the post after five months.

Today, Nithyananda’s devotees and math disciples face resistance in various parts of Tamil Nadu whenever they try to expand their activities there. “He expects Hindu outfits and other Hindu religious leaders to rally behind him, forgetting that he had single-handedly brought disrepute to our religion,” points out a leader of the Hindu Munnani.