Christianity and Shaivism meet in Ilayaraja, and yet... 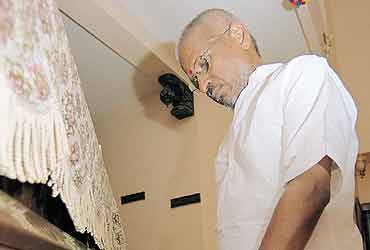 outlookindia.com
-0001-11-30T00:00:00+0553
Manickavasagar is a name most non-Tamils may mispronounce. Oratorio isn't familiar terrain. Hungarian conductor Lazlo Kovacs is not someone we know. Yet, Ilayaraja, the little master from Murugesan Street, T. Nagar, Chennai, brings all this together and weaves magic. To ears attuned to listening to Manickavasagar's Thiruvasagam sung by Oduvars (Shaivite temple singers) in traditional panns (precursors to ragas), Ilayaraja's attempt could amount to blasphemy. To upholders of "tradition", this fresh engagement with the ninth-century bhakti saint's ecstatic outpourings—involving the 90-piece Budapest Symphony Orchestra, 60 East European voices with a choir of 25 children, a choir of 60 Indian voices, 40 Indian musicians and 10 voices from New York—may seem an odd mixture. As P. Unnikrishnan, classical/playback singer who lent his voice to Thiruvasagam puts it, "Only Ilayaraja could have done it."

However, Ilayaraja's choice of form doesn't seem inappropriate given that George Uglow Pope, who translated the text into English in 1900, was a Catholic missionary. K.A. Nilakanta Sastri writes in his History of South India that the main theme of Thiruvasagam is "the supreme power of divine grace to liberate the soul.... Some would trace Christian influence in the trend of the saint's thought and feeling." Ilayaraja's rendition of it as a 'symphonic oratorio' was made possible thanks largely to the efforts of Catholic priests Fr Jegath Gaspar Raj and Rev Vincent Chinnathurai and their outfit, 'Tamil Maiyam'.

But the Catholic pursuit—from G.U. Pope to Tamil Maiyam—over a text that espouses Shaiva Siddhanta is intriguing. "Tamil Maiyam borrowed Rs 70 lakh to make the album possible," says Raj. He rhetorically raised the obvious question during the launch: why is a Catholic group spending time and energy on Shaivite hymns? The answer: god is one, and the oratorical Thiruvasagam is one of many paths towards the universal god. But the Shaivism of eighth and ninth century Tamil society did not believe in mouthing such safe inanities. It was fiercely monotheistic and had no love lost for other religions. But Manickavasagar himself was benevolent, even being appropriated by the Siddhars tradition who espoused an egalitarian worldview.

It's such a text that Ilayaraja uses to showcase his conductor capabilities, taking us through several zones of musical experience in the hymn, Polla Vinayen, ranging over 20 minutes and the piece de resistance of the album. Topping his favourite Keeravani raga with a crescendo of violins and vocals, he daubs the invocation Namashivaya Vazhga in Kalyani, culminating in Shanmugapriya. American singer Ray Hartcourt unobtrusively complements Ilayaraja's voice with Pope's lyrics. 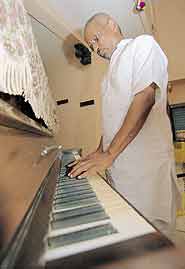 The leitmotif that goes "I am just a man/ imperfect lowly/How can I reach/for something holy?" is loaded with spiritual and sociological meaning. Ilayaraja's beginnings were rather humble. Born in 1943 as Gnanadesikan (but known as Rasaiyya) into a Dalit Christian family in Panniapuram of then undivided Madurai district, Raja had formal education only up to Class viii. Yet, fusing Tamil folk idioms, Indian and western classical genres, he almost monopolised film music in Tamil and Telugu till the early nineties. He has scored music for some 750 films in Tamil, Telugu, Malayalam, Kannada, Hindi and English for directors ranging from Bharatiraja to Adoor Gopalakrishnan.

But despite his achievements, Ilayaraja is uncomfortable with the truth of his origins. When K.A. Gunasekaran wrote Isaimozhiyum Ilayarajavum (The Language of Music and Ilayaraja) in 2002, the composer was offended by the fact that Gunasekaran had discussed his Dalit origins. Ilayaraja sued the publisher and author for defamation. He has tried ceaselessly to merge himself into all that Hinduism holds in high regard: he contributed several lakhs to the building of the 13-tier gopuram (tower) of the Srirangam temple; he is an ardent devotee of Thiruvannamalai; he had planned to start a music research centre with the aid of the now-disgraced Kanchi math. Apparently, just being a musical genius is not enough.

So why does Ilayaraja, having waltzed past many social obstacles, hate being reminded of his past? Outlook asked Ilayaraja about Bob Marley, Bob Dylan, Gaddar, his communist brother Varadarajan and even the recent Live-8 performances where music became a mode of protest. "I am beyond such garbage," was his curt reply.