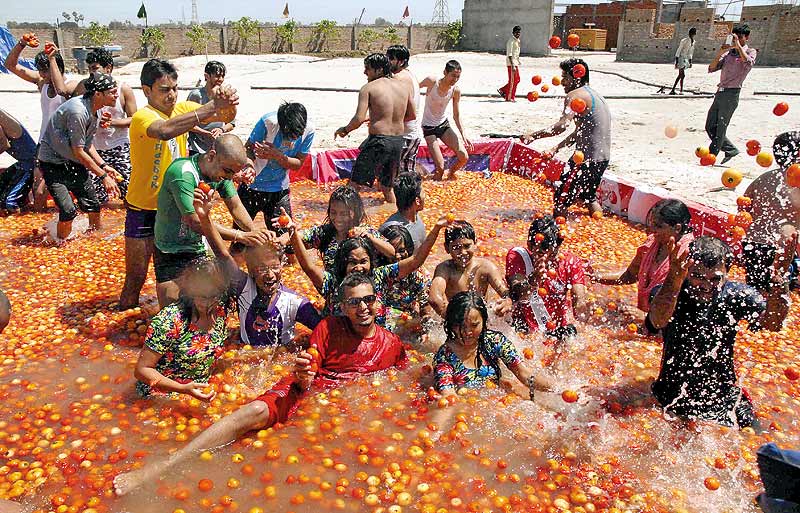 It’s a riot of red, squishy messiness.Scores of pulp-covered boys and girls, uncles and aunties, and teenagers with tomatoes in their hands and stars in their eyes, screaming, squealing, laughing and bombarding each other in a tomato-filled pool. This wasn’t Spain or laidback Bangalore. It was ‘La Tomatina’ in the unlikeliest of places in the world: in Patna, the capital of backward Bihar. This was the  brand-new Bihari Holi ritual, tamatar maar, debuting for the first time in Patna’s only water park. Going by the rave reviews of the event in the local media, Bihar’s burgeoning middle class dubbed the event an unqualified success. Bihar, as every Indian and his pet parrot know, has been springing a lot of surprises.

Nobody was perhaps more surprised than the tic­ket-checkers of the Indian Railways. For the first time in recorded history, some would say, the locals actually bought railway tickets on their way to the Ramlila grounds in Delhi to “celebrate Bihar” with a “special status rally”. Every person travelling to Delhi for the Nitish Kumar rally was specifically instructed to buy tickets, and they did so. The usual practice is to just clamber on to trains and displace everyone by brute force. Bihar is changing. “What next, Biharis giving up khaini?” gasped one surprised Bihari, pointing to the newspaper in utter disbelief.