Talking To 'The Devil'

When my meeting with the Dalai Lama was fixed in early February, Tibet was simmering but calm. Between the appointment and the actual meeting, Tibet had erupted... 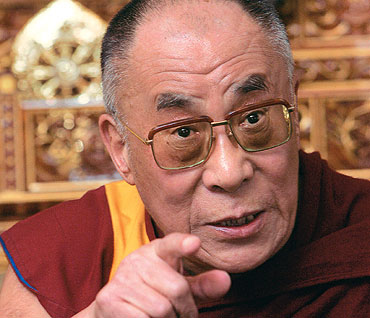 "The Dalai Lama is a wolf in monk's robes, a devil with a human face but the heart of a beast."
—Tibet's Communist party chief Zhang Qingli

When my meeting with the Dalai Lama was fixed in early February, Tibet was simmering but calm. I told the intermediary keen to arrange the discussion that while I admired and respected His Holiness, I wasn't into worship or meditation, neither had I any compelling curiosity to meet sacred persons with divine cover. I remember in the mid-'80s in Bombay when Bhagwan Rajneesh was all the rage, I studiously avoided invitations to visit him or his sexy commune. To me he was a harmless trickster, to others he was an avatar of Vishnu. Being Voltairean in my attitude, that's where things stood till last Monday when I went to meet my first godman.

Of course, between the appointment and the actual meeting, Tibet had erupted. Thus, I went with mounting expectation for my mostly off-the-record exchange to the sixth floor of the Ashok Hotel in New Delhi, not to obtain some mantra for celestial chanting but to hear first-hand from the most authentic source the shaming and blood-soaked events in and around what is euphemistically called the Tibetan Autonomous Zone.

Holy men put me off because they surround themselves with much pseudo-piety. This fugitive monk, arguably the closest thing to Him on our planet, greets you with a beaming smile, folded hands, wearing badly-stitched robes. There is no necklace round his neck, no mysterious beads on his forearms, no vibhuti on his forehead, no colourful garlands embrace his neck, no glittering rings adorn his fingers. More: there is no incense burning in his spartan but spacious hotel suite, no devotional music in the background. His Holiness, sitting cross-legged on the sofa, looks and sounds refreshingly commonplace with a pronounced weakness for jests which he relates with a Khushwant Singh frequency. And he loves his own jokes. Since I was privileged to sit next to him, I was the recipient of many gentle, presumably sacred, slaps on the wrist administered precisely when he delivered the punchline of his jokes.

Here is one characteristic example: "The Chinese accuse me of orchestrating the protests. I call for a thorough investigation. Let them investigate if I am responsible. Let them investigate any and everything—except my lungs, my stomach, my urine and my stool." He points to his bottom as he comes to the end of this delightful dig, and breaks into mild guffawing. He also slaps me on the wrist.

This 72-year-old celebrity priest has the innocence and enthusiasms of a four-year-old child. As he relates the brutal tales of "cultural genocide" in Tibet, he remains, miraculously, unemotional, devoid of bitterness or desire for revenge. I hope I am not trivialising my conversations because we were discussing matters of life and death and unspeakable violence by the Chinese. However, throughout my 90-minute chat with Tibet's supreme leader, I was constantly made aware that I was talking not to a religious-political saint fighting for basic civil rights for his people but to an ordinary human being simultaneously burdened by divine status and a Nelson Mandela-like mission.

The history of repression in Tibet that he recounted, he must have repeated thousands of times. Yet his narrative and his telling of it are both vivid and fresh. He needs little prompting as he begins in 1911 and goes on till 2008. For India, he has a warning. If the Chinese refuse to accept the Indo-Tibetan border drawn by the British, then the Chinese could easily claim Assam, Himachal, Arunachal....

Then it was time for another yarn. Beijing had lured 10,000 native Tibetans to become Communists and help govern Tibet. However, a Chinese politburo member had confessed that out of the 10,000, the party could trust only two. Happily, both these comrades visited India and met their spiritual master. With tears in their eyes they prostrated before him and swore eternal loyalty. "So, they don't have even two loyalists," he laughs uncontrollably.

The Chinese have been engaged in buying Tibetans with what Pankaj Mishra calls "feckless modernisation". Certainly, a lot of money is being pumped in. There are more jobs, better schools, better houses and also something new: brothels! But what about the soul of Tibet? "Why are they trying to destroy our culture, our way of life?" he asks, and provides an answer: The Chinese wish to change Tibetan history, they can never accept that the Tibetans are a separate people. "Intellectually and culturally we are closer to India, politically we are closer to China."

He pays profuse thanks to the present government, ironically, on the day a scheduled meeting with Vice President Hamid Ansari was "postponed". He also doesn't seem to be too upset that during our entire conversation there is a minder from the mea sitting opposite taking notes.

As I get up to leave, I instinctively touch his feet (message for Rupert Murdoch: no, he doesn't wear Gucci loafers) not because I believe he is the 'son of God' but because he has goodness written all over him.