Talking To My Selfie

It’s a palm-sized electronic alter ego. It both chains us and invests us with a new freedom. 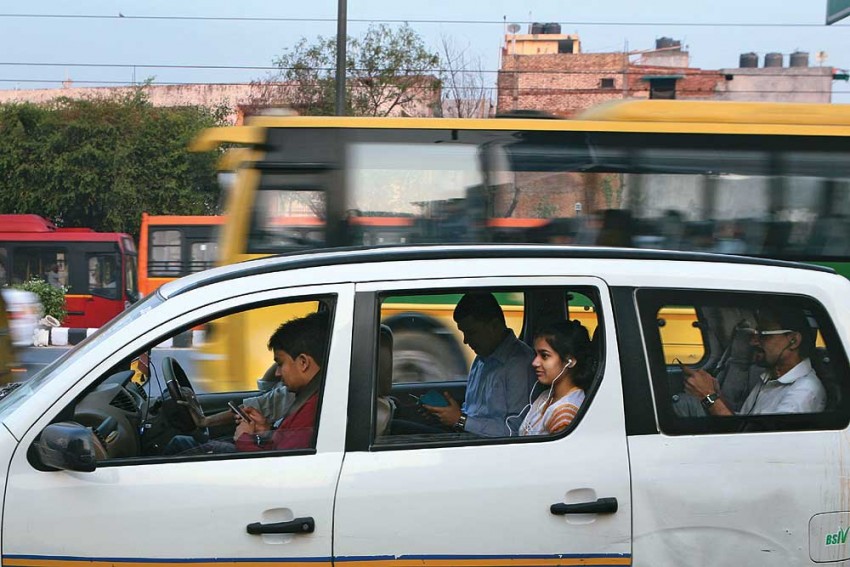 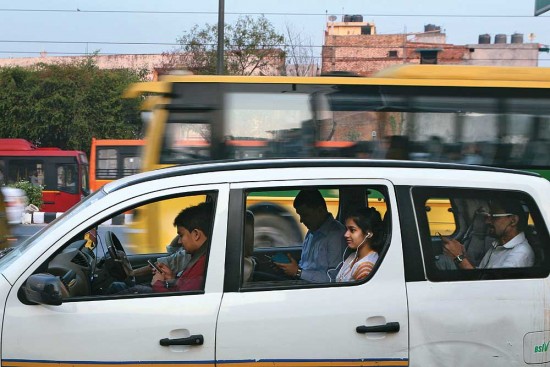 The mobile phone came to India in 1995 and I met it immediately. My son’s paediatrician was a pioneer; he carried a black Motorola some nine inches long with a stubby antenna. He was a kindly man, good at dealing with anxious parents at inconvenient hours, but he didn’t like us calling his mobile phone. “Eight rupees a minute—incoming!” he said to us sternly, after we had called him about strep throat. Doctors were India’s cell­phone vanguard; for them it was a morphed-up pager. That’s how Dr Lall wanted us to use it; he was an early advocate of the ‘missed’ call.

For years I made the mistake of thinking of it as a like-for-like replacement for the landline phone. Some time in the late 1990s, I watched in sneering fascination as a family in my neighbourhood, father, mother and daughter, walked the park in the mornings, holding their mobile phones. My superciliousness was driven by two questions: a) why couldn’t they walk in the park for half an hour without a phone and b) why did each member of this family need a phone? Wasn’t one enough?

The second question was genuinely felt because I understood this new gadget merely as a more capable phone, one that could go where no landline had been before. So just as you shared an indoor phone at home with your family, why couldn’t you share a mobile phone for those outdoor excursions when being in telephonic contact was urgent? I borrowed a friend’s phone while keeping nightly vigil outside intensive care through my mother’s last illness. I called in medicines, issued status alerts and organised vigil shifts without once having to worry about the state of the one public phone in the hospital. I marvelled at that primitive Nokia’s usefulness without being tempted to buy one. Life wasn’t a continuous hospital emergency and when the need arose, I could, as I had this time, always borrow one. 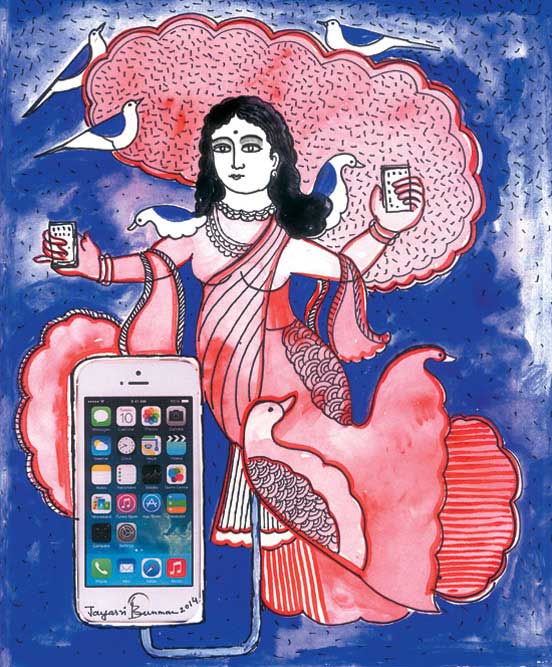 By Jayasri Burman, 2014, Watercolour on paper

Cellphones have enabled Indians to the same extent as electronic voting machines have enfranchised them.

I was, of course, wrong. I now know that my mobile phone is an intimate extension of myself that I would no more lend to a friend than I would my ears, my toothbrush, my diary or my shoes. There’s nothing mysterious about this possessive attachment; my mobile phone has my number. I’m twice-named now and I’m not about to be a party to my own impersonation. There’s a reason why sim expands into Special Identification Module: you are your number. You lock your keypad not because others might run up a bill on your account; it’s because they might temporarily usurp you. Your phone opens the gates to your private cave; that pioneering hacker, Ali B, alerted us to the perils of password theft with his prescient mantra, “Khul ja, SimSim!”

Those morning walkers knew something I didn’t: a personal phone that you can carry with you isn’t just a device, it’s an accomplice, an avatar, an alter ego (without the ego) and it manages to be all this while being satisfactorily dead. The mobile phone as a proxy persona would be interesting but sociologically unimportant if mobile telephony had stayed a technology used by doctors, bourgeois walkers and the urban elite, if it had remained confined to the sort of people who had access to landline phones. But it didn’t. 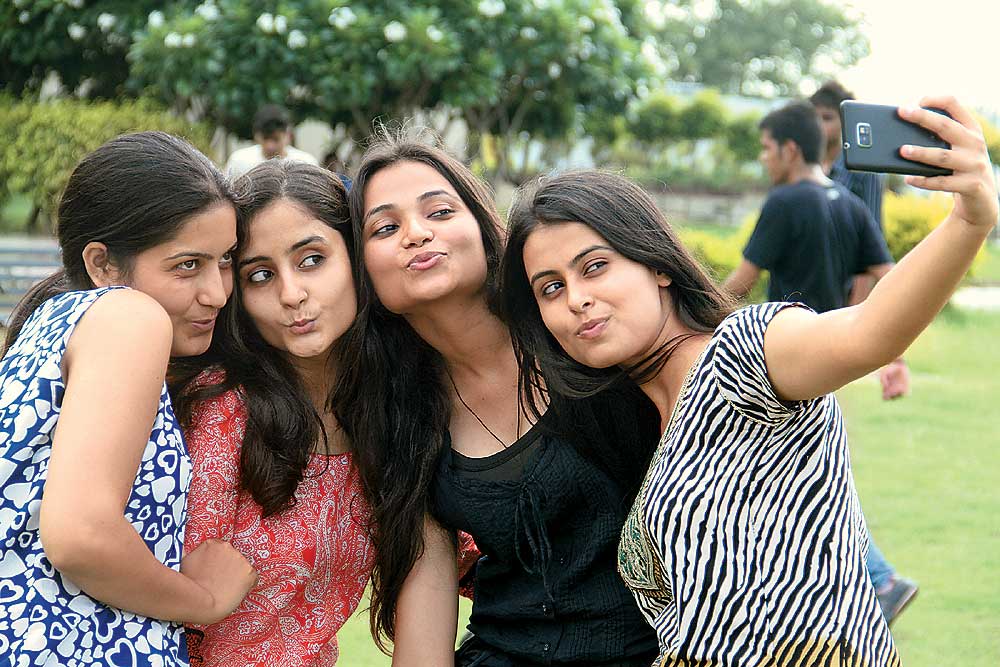 There are just over 30 million telephone lines in use in India currently. There are more than 900 million mobile phone connections. Even allowing for the facts that one landline serves many people and that a substantial number of people own more than one mobile phone, mobile telephony is still an order of magnitude ahead of fixed line phones in terms of social penetration. No modern technology has ever been so widely shared by Indians across the rifts of class and caste. The only other device that most Indians get to use is the electronic voting machine. It’s a measure of the social significance of cellular technology that you can argue, without seeming ridiculous, that the mobile phone has enabled Indians to the same extent as EVMs have enfranchised them.

Is there any device that comes close to achieving the social significance of the mobile phone? Growing up in the 1960s, the personal technology that defined middle-class respectability in India was the wristwatch. Despite the best efforts of HMT (Hindustan Machine Tools), India’s public sector behemoth, it was a fact widely accepted that no one who was poor ever wore the time strapped on his wrist. To own your own time was a luxury because you could ask it of others. In a world where a full-time cook was paid Rs 35 a month all found, a watch, even HMT’s Janata, represented four months’ wages. As a child, I remember noticing with surprise an officiating south Indian priest performing a ritual wearing a stainless steel watch. Then the world changed and it became commonplace for the respectable poor to wear watches. The middle classes noticed their presumption and gossiped about the profligate poor. 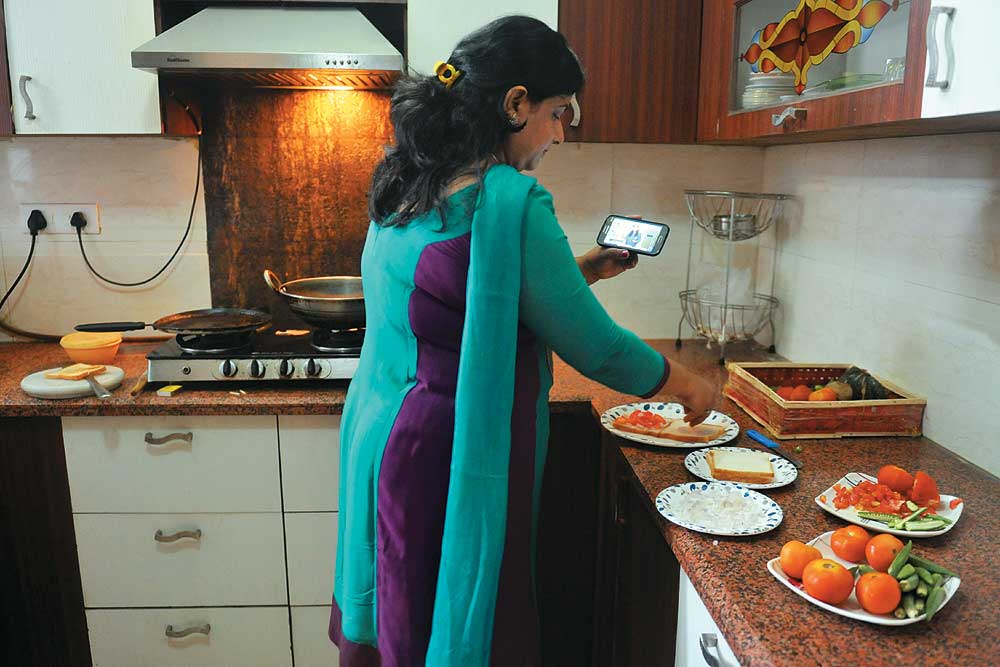 Wherever you go A Ghaziabad housewife checks YouTube for a recipe. (Photograph by Tribhuvan Tiwari)

For a brief period in the 1970s and 1980s, the transistor radio, carried confidently on a cycle trailing ribbons of Vividh Bharati as it passed, became a symbol of social mobility and connectedness. The radio commercial (“sirf ek, sirf ek, sirf ek Sa-ri-don!”) became the ambient noise of the Indian city. If the watch stood for the urban plebeian’s integration into the time-discipline of modernity, the transistor radio announced his assimilation into the dreams of the nation-state as broadcast by All India Radio.

The mobile is the ordinary person’s conduit to the digital world: computers are costly, wifi isn’t available everywhere.

The device that comes closest to rivalling the depth of penetration and the user enthusiasm achieved by the mobile phone in India is television. The decline of radio corresponds almost perfectly with the rise in television ownership. In the 1980s, Doordarshan’s network briefly created a pan-Indian audience where, thanks to its broadcasting monopoly, massive all-India audiences watched its programming in something approaching a national communion. A proliferation of channels and the growing reach of cable television and DTH have now created a fragmented audience, but more than half of India’s households watch television.

But the connectedness of radio and television, important though it is in supplying information and entertainment and creating community, is a passive connectedness, controlled not by the user but those who see him as an audience or a market. Mobile telephony, in contrast, makes its user a protagonist, an actor—it extends the scope of his presence, it makes him the hub of his own network. It frees the plumber of his dependence on a shopkeeper with a landline, and connects him directly with his clientele. It allows the fisherman bringing his catch in to sound out the best prices on the coast. And, by intermittently joining des and pardes, it alleviates the desolation of the immigrant’s exile.

The Indian inability to roll out physical infrastructure on any scale has crippled the spread of wired wi-fi and the high cost of entry has stymied computer ownership. This has made mobile phones the main way in which Indians are suckled by the sky mother, the internet. As feature phones become more capable and smartphones become cheaper, the phone has become the desi’s portal to the digital world. 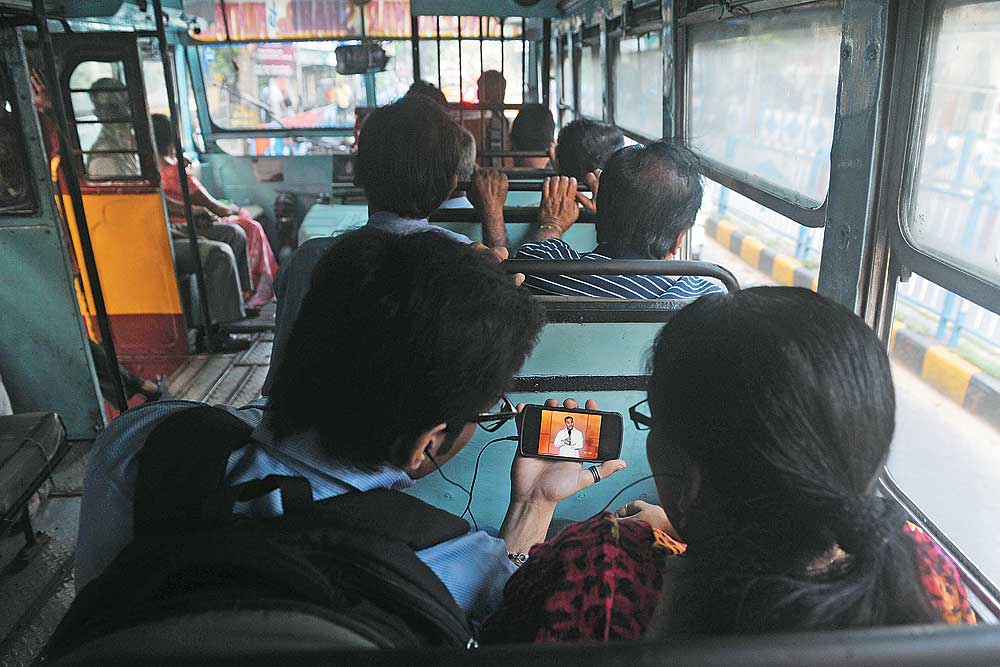 For the metropolitan middle-class Indian, touch phones turbo-charged with 3G have made life a moveable feast—or at least a loafer’s buffet. On a Metro ride from Green Park to Delhi University, I realised that nearly every other passenger was miming a new take on the Thinker: hunched over, phone in hand, not chin, browsing, not thinking.

The connected smart-phone means the end of vacant leisure. The slack-jawed bliss of doing nothing over a long commute has been taken from us. The browsable phone has killed off long form reading that once filled empty, unsociable time. Thanks to it, the social awkwardness of being alone has dis­­ap­peared. The phone and its headphones have magically turned loneliness into self-absorption and isolation into privacy. Physical presence and adjacency have begun to matter less in crowded urban environments as the remote caller and the online world become more vivid than palpable reality. This isn’t necessarily a bad thing; if texting or streaming music or reading a blogpost can transport you from the palpable reality of body odour and boorish commuters, that’s all to the good. But it does create strange tableaus of bodily presence and absent-mindedness.

The smartphone, like any other net-linked instrument, is a Faustian deal: it allows us access, it lets us be tracked.

The smartphone gives its user limitless opportunities to curate narcissism and its subset, nostalgia. It encourages us to take pictures of every encounter and excursion. Then it helps us ‘share’ these pictures, ‘sharing’ here being a euphemism for pimping yourself. Every tourist since the dawn of the snapshot has known that a picture of the Pyramids without you in it is just a postcard but it was the mobile phone that took this tourist logic to its logical conclusion, by birthing the ‘selfie’ where you, in the foreground, are properly larger than the pharaonic monuments that exist mainly to footnote your location.

To count ‘friends’ on Facebook, to ‘like’ someone or something so you might be ‘liked’ in turn, to blog and long for ‘comments’, to troll people on Twitter because everyone can stay the alpha male course over 144 characters (even women), to post links to pictures of you or pieces by you or praise for you, to Google yourself with 15 different keywords over three measures of time (24 hours, a week and forever) and to do all this on the move, this is the true payoff of being connected everywhere and all the time. How, you wonder, did people live without friends they had never met or the praise of strangers? 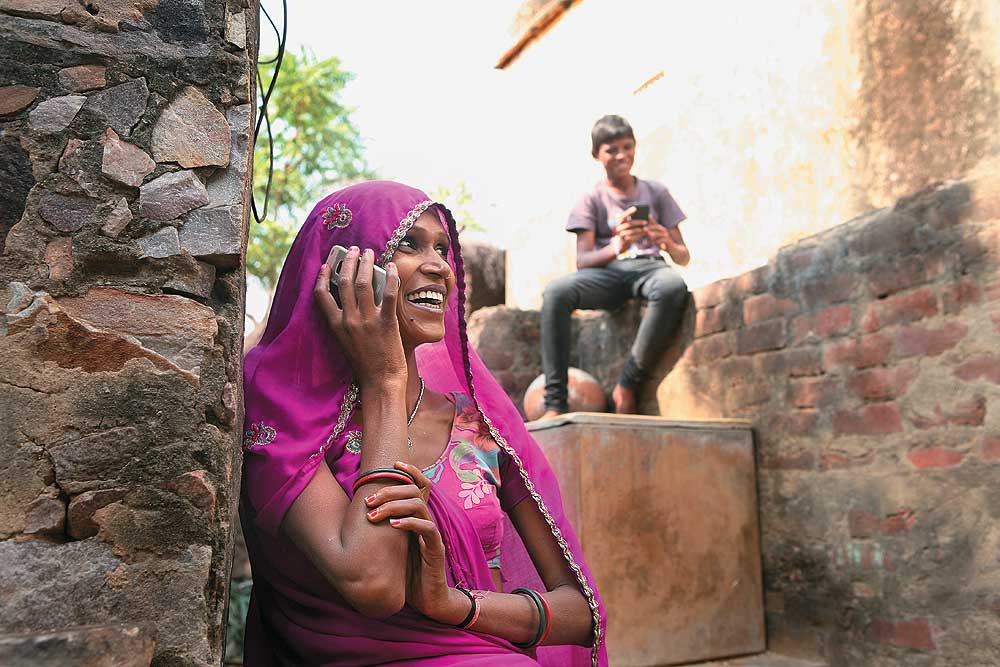 Rural touch A woman living on the outskirts of Jaipur reaches out to a dear one. (Photograph by Sanjay Rawat)

If 2002 was the first pogrom to star as breaking news on 24/7 television, the next one, if it happens, will be live-tweeted, complete with Skype feeds and bloody Snapchat selfies that’ll vanish after supplying the frisson that only murder can bring. The journey from the aankhon dekha haal of Akashvani’s cricket commentary to the aankhon dekha kaand of live carnage filmed by citizen journalists on their phones is a story that awaits its historian.

Edward Snowden and Glenn Greenwald and others have shown us how this brave new world is tracked by the state, how the phones we use enable our own surveillance. The truth is that every smartphone with an internet connection is a Faustian compact: we trade in our location, our consumer histories, our preferences, our friends, the content of our letters for the pleasure of sunbathing in digital sociability and the promise of omniscience. But unlike Faust’s predicament, this isn’t tragic or even a predicament, partly because everyone else is doing the same thing but mainly because we like what we get in exchange and wouldn’t have it any other way.

The mobile phone gives us access to so much that’s useful that it would be precious to picture ourselves as victims of some predatory technology. But the conjunction of this phone and the internet has changed the way in which we deal with the world so radically that in the interest of self-knowledge if nothing else, it’s useful to make a reckoning.