However bad the itch to imitate the US vis-a-vis Pakistan, we can't afford it Updates 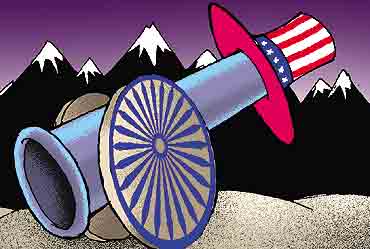 outlookindia.com
-0001-11-30T00:00:00+0553
As the US winds down its war in Iraq, our war hawks are getting wound up. "Pre-emptive strike", the new Pax Americana doctrine, rises like a phoenix in the subcontinent. Though we pioneered the concept after the December 13 attack on Parliament, the damn Americans stole our idea, stopped us from executing it—then went ahead and did it themselves.

It's tempting to look at problematic issues superficially and conjure quick-fix, macho solutions. Contrary to expert predictions, the US captured Iraq easily. The assumption is, so can we in Pakistan. Attack Pakistan and our terrorism problem will be over, once and for all. Sure, ordinary people don't want war, but they can be made to support it. During the Nuremberg trials, Hitler's Reich Marshal Hermann Goering disclosed a simple strategy: "All you have to do is tell them they are being attacked and denounce the pacifists for lack of patriotism and exposing the country to danger. It works the same in every country." And it works even today!

We can't ape the US simply because we are not the world's sole superpower. More importantly, Pakistan is not Iraq. Saddam Hussein's rag-tag regime had been crippled by two wars and then bled for 12 years through inhuman sanctions before America invaded. But in the last 20 years, Pakistan's army has consistently strengthened itself. And unlike Iraq, Pakistan has and will use weapons of mass destruction if attacked. So unless we are prepared to pay an exponentially higher price than what we are paying today for the ongoing terrorism, we have no choice but to rule out preventive strikes. Instead of preventing terrorism, it will provoke a catastrophic war.

We have reason to be exasperated. Instead of targeting Syria, the US should focus single-mindedly on dismantling Pakistan's terror hub—in their own interest, if not ours. But far more than America, we have cause to worry about terrorism's deep roots in Pakistan. We share a border, jehad factories have mushroomed, unemployment and Islamic fundamentalism is soaring, 200,000 jehadis are in search of a mission, two million are being groomed, two Pakistani nuclear scientists have reportedly collaborated with Al Qaeda, Kashmir is a volatile conflict, the core of the Pakistani establishment's strategic thinking is to destabilise India through the low-cost option of cross-border terrorism.

The list is long and that is why we are justified—a million times more than America was—in choosing preventive strike. Unfortunately, with India and Pakistan going nuclear, there's no longer the asymmetry of strike capability required to launch an offensive. So what does one do? We can't just sit back, roll our eyes heavenwards and say, "This too shall pass". Actually, it can. Punjab has shown us that. But the crisis passed not because we did nothing, or attacked Pakistan or because Pakistan stopped supporting Khalistani terrorists. It ended because eventually people got fed up, volunteered intelligence and our police took the fight into the terrorists' turf and eliminated their leadership.

In times of distress, our rishis taught us to look inwards. All problems and solutions lie within. It is tempting to blame outsiders for one's problems but that is being an escapist brat. If a woh comes between a pati and patni, it is because marital relations have weakened. There's much we can do to strengthen relationships, secure our home instead of blaming intruders.Outsiders can fish successfully only in troubled waters.

When it comes to Kashmir, what have we really done to win over the people? Have we strengthened local government, security forces, Kashmiris? What has Delhi done other than indulge in dud cliches and pointless exercises like periodically changing interlocutors and then working at cross-purposes to undermine him? Has Delhi convinced us, let alone the Kashmiris, that it's serious about solving their bread-and-butter problems? When it comes to preventing terrorist strikes, the best offence is defence. It is not for want of trying that there was no repetition of a September 11 type of strike in the US. Terrorists failed because American authorities became vigilant and proactive—in action. We, in turn, prefer to spin ideas, not implement them.

If America takes up India's cause, it won't be because we are armed with moral justifications, but because we are a stable democracy with economic potential. Instead of falling into the war trap and diverting precious resources into destroying Pakistan, it's wiser to empower our own people by investing in health, education and infrastructure so we can claim our rightful destiny as 21st century's economic powerhouse. Simultaneously, we must engage in talks with Pakistan—even if we don't make headway solving the Kashmir problem, we can use the opportunity to consistently expose Pakistan's gameplans to the world powers. Dialogue doesn't entail lowering our guard or declaring ceasefires. Covert operations must be pursued vigorously so as to make it a high-risk venture for Pakistan to continue backing terrorism.

Vigilant border patrolling, aggressive counter-insurgency operations and sowing dissension in the fractious jehadi ranks will help. Counter-terror operations and dialogue must take place simultaneously—one shouldn't preclude the other. It's time to talk now. Talk tough but talk quiet, without the accompanying din of publicity.