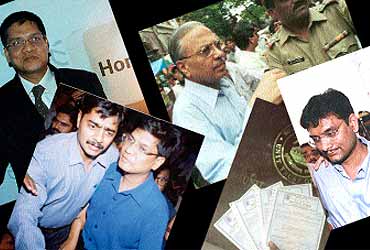 outlookindia.com
-0001-11-30T00:00:00+0553
Corporate India will soon have a super-sleuth to investigate the growing incidence of white-collar crimes and corporate misgovernance: the Serious Fraud Investigation Office (SFIO). This specialised unit will function under the finance ministry's Department of Company Affairs (DCA). With the Indian corporate sector reeling from a string of scams—from the UTI fiasco, the Ketan Parekh stocks scandal, the Madhavpura Bank swindle and the Xerox Modicorp bribery case—it was decided to come down hard on econo-crimes.

The SFIO was one of the main recommendations of the Naresh Chandra Committee on Corporate Audit and Governance in its recent report to the government. Conceived as a multi-disciplinary unit capable of professionally investigating white-collar crime, the SFIO will have a core group of officials drawn from various ministries.

"This team will consist of experts from fields such as accountancy, forensic auditing, taxation, IT and capital markets," says a DCA official. But the SFIO will take on only select cases, those above a specified scale. "It will investigate about 10 major cases a year," says a DCA official.

How effective an agency like the SFIO will be in detecting and acting against corporates remains to be seen, considering that recent scams have reconfirmed that these are complex operations, involving front companies. Take Xerox Modicorp, which was routinely bribing government officials to procure business. During the investigation, it was discovered that the company was making payments to four or five obscure companies for "services rendered".

The Department of Personnel and Training (DoPT) had initially objected to the setting up of the SFIO. In its comments sent to the finance ministry in response to a cabinet note circulated to all departments, the DoPT said there was no necessity for a serious-frauds office, given that there already existed the CBI's economic offences wing. This was resolved only when the finance ministry pointed out that the CBI's mandate in dealing with economic offences related to crimes by individuals, a somewhat different brief than that intended for the SFIO.

According to the cabinet note, the SFIO will be headed by an official of the rank of either an additional secretary or joint secretary and would be given freedom to investigate various sectors of the economy. Its proposed mandate will allow it to take up corporate frauds characterised by these factors:


At a recent seminar on corporate governance and accounting standards organised by FICCI, DCA secretary V. Dhall, who will oversee the SFIO's functioning, said: "Greater liberalisation imposes restrictions on more effective regulation. Effective and speedy enforcement should be provided for in the Companies Act and penalties enhanced so that it acts as a deterrent." While making it clear the government was against excessive interference, Dhall pointed out that he favoured giving more teeth to regulators in view of the recent accounting scandals.

Going by recent estimates, the DCA inspects almost about 200-250 companies annually. With the setting up of the SFIO in the next couple of months, investigations into key cases will be sharpened. "We are moving towards a tighter regulatory regime where penalty limits will be increased and rationalised," says a DCA official. All eyes will then clearly be on the SFIO to see if it manages to crack the whip and bring the corporate sector to fall in line.