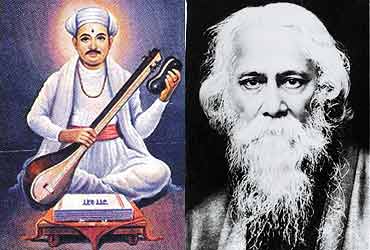 outlookindia.com
-0001-11-30T00:00:00+0553
Pune University's enviable collection on Sant Tukaram, among the foremost poet-saints of Maharashtra, just got richer. The new addition is Rabindranath Tagore's transcription and translation of 12 Tukaram abhangs—typical four-stanza devotional songs—into Bengali. That Tagore, and his elder brother Satyendranath, had read, translated and written about the 17th century bhakti poet was known but locating the precise 12 abhangs among Tagore's works has brought new life to the university's 10-year-old effort to document everything on Sant Tukaram.

Tukaram stands tall in the pantheon of poet-saints of Maharashtra that begins with the 12th-century Sant Jnaneshwar. Along with his contemporary Sant Ramdas, Tukaram influenced generations of Maharashtrians with his verse and, historians say, paved the way for Chhatrapati Shivaji's ascent. Belonging to the bahujan samaj, Tukaram, unlike other poet-saints, did not eschew material life but lived it fully, rebelled against the feudal social order of the day through his verse, became the people's prophet as it were before attaining sainthood. Tukaram's abhangs and their place in Marathi culture are unparalleled. Numerous films have been made on his life, musicians have set his abhangs to tune. He has also inspired modern-day rebel poets like Arun Kolatkar and Dilip Chitre, his abhangs have been translated into English, French, German, Spanish, Greek, Esperanto, and of course, Bengali.

Tagore's rescripting and translations are priceless, says Dilip Dhonde, research assistant at the university's Sant Tukaram Maharaj Marathi Cultural Chair. "We are delighted. Now we begin the hunt for the original manuscripts," he says. Teacher-writer Gayatri Chatterjee, studying Tukaram, gave him the translations of 12 abhangs which were found in Tagore's Malati Pothi and Navratna volumes. Cultural historians say the find is important to the extent that it shows the exact abhangs that Tagore selected and, hence his perspective on the bhakti poet.

Tagore chose an abhang from Guru Updesh and two from Kavitvache Sfuran in which Namdeo and Pandurang appear in Tukaram's dreams asking him to write for the people, as many as seven from Tukaram-Jeejai Samvad which contain exchanges with his wife—and through them home truths and the universal truths of life itself—and two from his last days as a prophet of the people. "Taken together, Tagore's selection is a bio-sketch of Tukoba, spanning his life and works," remarks Dhonde. These translations first appeared in the Rabindra Rachnavali but Dhonde says this was known to only Bengali literature aficionados.

Tagore's fascination grew from his brother Satyendranath, India's first ics officer posted in Ahmednagar, Satara, Pune, Bombay, Karwar—all in the then Bombay Presidency. Satyendranath not only learned Marathi and read Tukaram extensively but also gave discourses in Marathi on the poet-saint at Prarthana Samaj meetings in Pune in 1871. He also translated Tukaram's abhangs into English. In 1889 he wrote Bombai Chitra and devoted a section of the book to Tukaram. Later in 1901 he wrote an essay—Tukaram, the Shudra poet of Maharashtra.

Satyendranath is credited with having introduced Tukaram to Bengali literature and art. Inspired by him, Yogendranath Basu learned Marathi and serialised Tukaram's biography in the monthly Daasi. The serialisation was later published as a book, Sant Tukaram. Later, in 1929, playwright Harindranath Chattopadhyay wrote his play Tukaram which earned him critical acclaim. Renowned Santiniketan artist Nandalal Bose, on Mahatma Gandhi's request, drew sketches of Tukaram. In the 1970s, writer-filmmaker Satyajit Ray also made sketches of Tukaram which was used by the Sahitya Akademi for its volumes on the poet.

Why was Bengal fascinated with Tukaram? "Tukaram rebelled against the oppressive social order of his time which has parallels in Bengal.His verse finds resonance later in Prarthana Samaj which has a likeness to Bengal's Brahmo Samaj which, in turn, influenced the Tagores. And, of course, Tukaram's language and concepts are modern. These may explain why Bengali intellectuals and writers, particularly those exposed to Marathi, have done so much work on him," says historian-author Dr Aroon Tikekar. Adds Dhonde, "Research shows that the Bengali song form pad kalpataru has likeness to our abhangs." Tagore carried Tukaram's verse into Bengal. His work has come home now, as it were, to Pune University.