Taal Of The Art Work Balance

Bureaucrat-dancers and banker-vocalists: India has no lack of professionals who find time to soar high in the classical performing arts 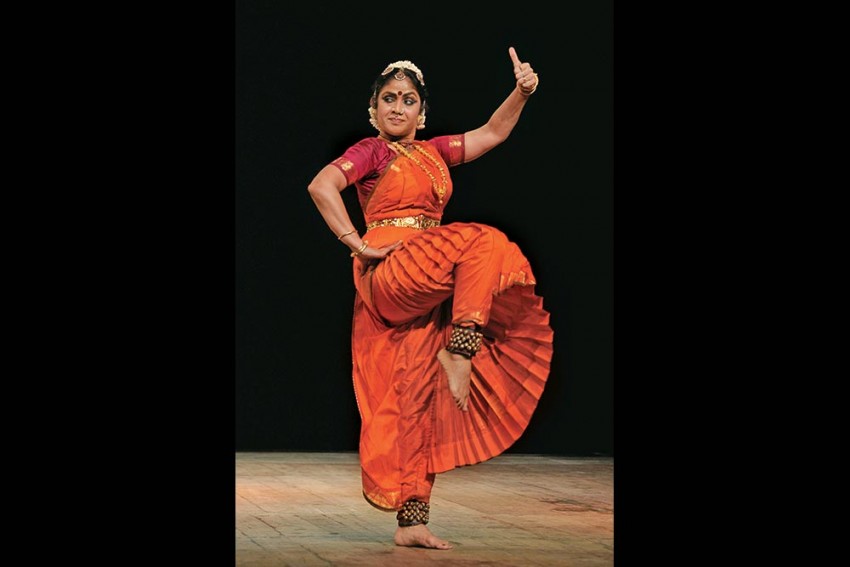 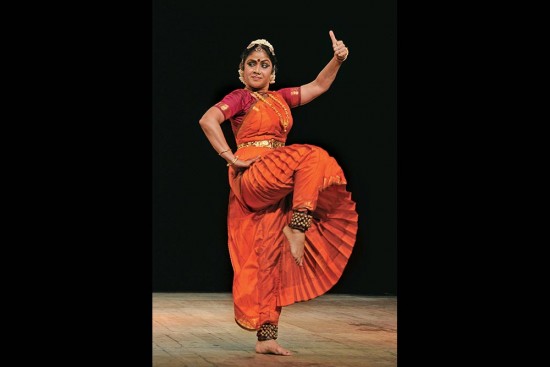 Ananda Shankar Jayant is no stranger to travel, as you’d exp­ect of a railway official. The catch is that many of these trips are unofficial, with some taking her abroad—for she is simultaneously a busy classical danseuse. The Hyderabadi, who learned Bharata­natyam and Kuchipudi at Chennai’s famed Kalakshetra in the 1970s, has also earned a Ph.D. in tourism and is a senior officer at the Centre for Railway Information Systems, Secunderabad.

Conflicting careers? Not at all, says Ananda, a TED speaker and Padma awardee. “On the contrary, a regular daytime job enables you to cross-subsidise your serious artistic pursuits,” she adds. “This is my 30th year in government service. It’s all about prudent time management.”

To excel in an art or two that suits one’s talent while rising to be an above-par professional in an unrelated field is something a fair few in the country’s classical music and dances have achieved. While the trend has, predictably, been stronger of late, it wasn’t unheard of in past centuries. One might point to mus­icologist V.N. Bhatkhande’s aptitude for cherry-picking law points—he practised at the Karachi high court in the 1890s—as a skill that aided him in penning the first modern treatise on Hindustani classical. Down in the Deccan, vocalist Sripada Pinakapani (1913–2013) enriched the Carnatic tradition in his native Andhra while teaching at top medical colleges, with an MBBS and an MD under his belt.

Cut to 2018, with Mumbai all dug up to lay metro rail tracks. Young khayal singer Aditya Modak, until recently, would drive from his Borivali flat to the Goregaon office where he worked as a chartered accountant at JPMorgan Chase. “The traffic jam is so heavy that you spend three hours overall to and fro a day...at snail’s pace,” sighs the disciple of Pt Ram Deshpande. “Inside my car, I’d switch on the electronic tanpura. It’s thorough mus­ic practice in solitude—90 minutes up and as much time on my return home.” This April, he gave up his CA job to concentrate on music—a move that star Carnatic vocalist Sanjay Subrahmanyan successfully made in 1999, as did the Thrissur brothers more recently. As ­music historian Sriram V. notes, “It’s tough to keep both parallel tracks going.”

Modak has a namesake in the same city, another committed classicist. But Aditya Khandwe, who teaches finance at the Lala Lajpatrai Institute of Management in Mahalakshmi, wakes up at 3 a.m. to do his riyaz. The job, he says, affords him the latitude to stick to classicism—“like my guru Ulhas Kashalkar”. How so? “I needn’t water down my music or do PR. I perform only before those who are serious about Hindustani. After all, I have a regular income from another profession.” 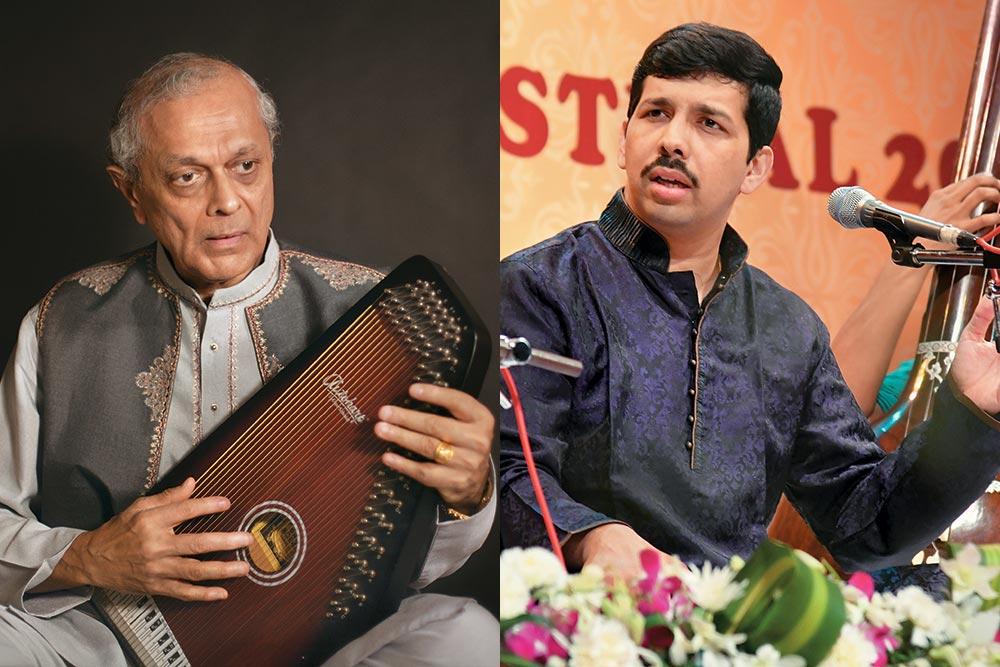 Such devotion to the arts can, in time, make one a full-time musician. This summer, Mumbaikar Dhananjay Hegde quit his managerial job with Karnataka Bank to focus totally on Hindustani vocal. Like his master Vina­yak Torvi, who was both banker and khayal exponent, Dhananjay would “shut off” his music on entering the office. “At the branch, I wouldn’t even hum. Likewise, I never brought home any office work. It’s a tip I got from my guru.”

Habits, of course, vary. Rudra veena exponent Suvir Misra, commissioner at Customs and Central Excise in Mumbai,  does what he calls mansik pujan; that is, mental practice . “In those rare lean hours at the office, I delve into a raga, imagining playing it on my instrument,” says the left-handed pupil of Zia Fariduddin Dagar. “The sounds move in your head. I virtually present an alaap or jor-jhala sitting on my revolving chair.”

“Profession is ­livelihood, art is life. You need both. If the activity is variable in demands, art is ­pursued when ­profession gives you a lean period,” says scholar Deepak Raja.

Turn to Bangalore, where Pattabhirama Pandit, 40, practises music until well after midnight. A software program head with Philips Healthcare, which sends him on assignments abroad, he teaches Carnatic to youngsters at his Ban­ashankari residence after supper. “It’ll be 11 pm by the time they leave and I start my practice spanning some two hours. Hmm, I wake up a bit late and rush to the office,” adds Pattabhirama, who is all reverence for his titan teacher K.V. Narayanaswamy and senior colleagues who encourage his artistic pursuits.

Only last month, fellow Bangalorean S. Saketharaman moved back to his home city of Chennai—but the 36-year-old Carnatic vocalist, a disciple of Lalgudi Jayaraman, still works remotely with the MNC merchant bank where he’s been an IT engineer since 2008. “Initially, it was tough to balance the two engagements, but I earned the trust of my bosses over the years,” adds Saketharaman, who always lived near his office to escape the traffic. “I spend eight hours a day on ­music. At weekends it’s 12–14 hours—­unless I have to perform somewhere.” 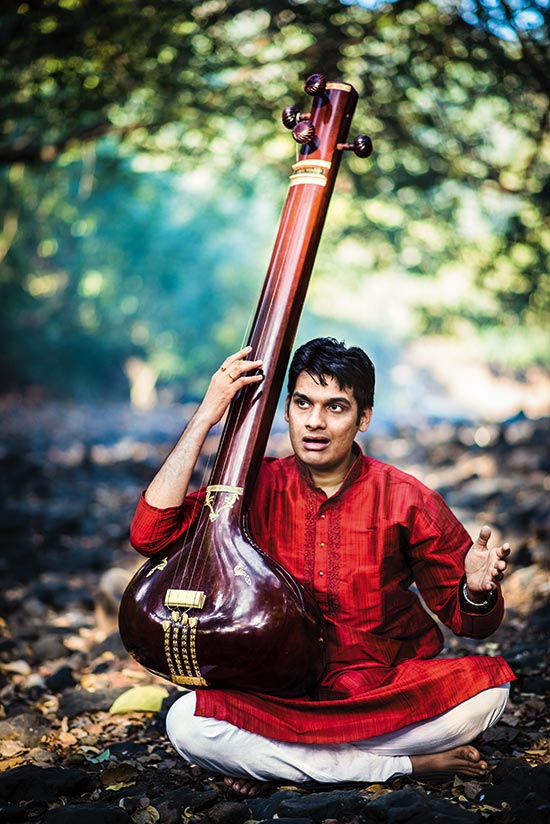 Saketharaman’s Bangalore colleague, Arun Warrier, is a vice president who takes an overnight train to Kerala almost every weekend to play the maddalam drum at his state’s classical panchavadyam ensembles. He often performs around Kochi and Thrissur—two cities between which well-known Carnatic vocalist Sreevalsan J. Menon drives to work as a professor at Kerala Agriculture University, Mannuthy. “As the head of the varsity’s Agriculture Technology Information Centre, I routinely interact with farmers. It keeps me grounded in realities amid an exalted status that society confers on classical musicians,” he says.

Menon, 47, a disciple of Neyyattinkara Vasudevan, got his Ph.D. in 1997 from the Pusa Institute in Delhi. And the capital itself has no lack of twin-track artistes. Shovana Narayan is a Kathak celebrity who was an officer in the Indian Aud­its & Accounts Service, having done a second MPhil (in defence and strategic studies) from the University of Madras in 2008, two years before retiring from service. Near Qutab Minar in Mehra­uli, rudra veena player Sharada Mushti is co-director with a rep­uted studio specialising in narrative mus­eum design. Architecture and music, as volumetric and multidimensional crafts, “take shape in the artist’s negotiation of rhythm and repetition, space and time, and order and chaos,” notes Sharada, a disciple of veteran sitarist Arvind Parikh.

Padma Bhushan Parikh, 91, is a Vilayat Khan protégé and heads DHL Lemuir Logistics, Mumbai. He follows artistic tips in entrepreneurship—one from a yesteryear ustad being: “Don’t play by rote, even if a bid to improvise can pop up an off-key note. Take the risk!”

Looking east, Calcutta lost sarod player Buddhadev Dasgupta early this year. He was an alumnus of the 1856-founded Bengal Engineering and Science University in Shibpur, and served as trai­ner-administrator with the Electric Supply Corporation for 32 years. The city still has quite a few Hindustani musicians who were in other profess­ions: sit­arist Subroto Roy Chowdhury who taught economics for two deca­des in leading colleges, sarod­iya Kalyan Mukherjea who earned a Ph.D. in maths from Cornell Univers­ity before serving at the Indian Statistical Institute, and Hindustani vocalist and industrial economist Sugata Marjit, who recently retired as Calcutta University’s VC. ITC Sangeet Research Academy’s executive director Amit Mukherjee, a Kirana gharana vocalist, was a scientist with the Geological Survey of India for 32 years. 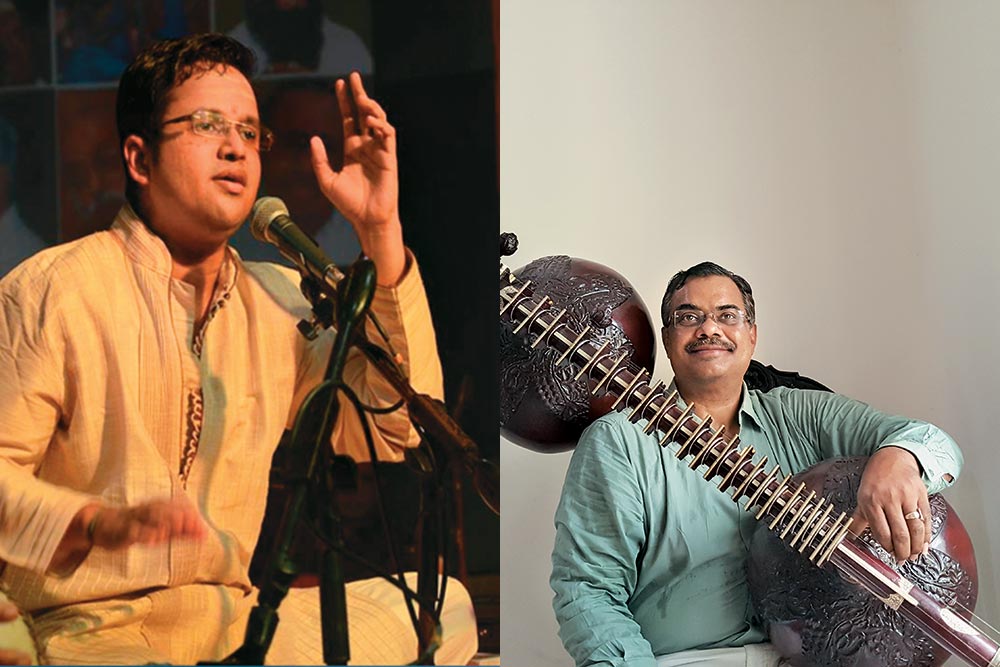 Teaching languages has inspired certain arts-loving academicians to go avidly co-curricular. Vocalist Milind Malshe, who taught English at IIT-Bombay, developed a module ‘Appreciation of Music’ in association with Hindustani exponent Veena Sahasrabuddhe—and ran it at the institute for a decade till his retirement last year. “That prompted a couple of the students to take up music full-time,” he chuckles. Adds Pune-based historian-arc­haeologist Chaitanya Kunte, now primarily a harmon­ium player: “My interest in indology immensely supplemented my res­earch on ethnomusicol­ogy.” Fellow Pune resident Shriram Hasabnis, too, plays the harmonium, and is otherwise an IT professional—he now works as a user experience designer aft­er having freelanced with UTV Toonz in Mumbai. As Hindustani scholar Deepak Raja, an MBA and sitarist, notes, “Profession is liv­elihood, art is life. You need both. If the activity is variable in demands, then art is pursued when profession gives you a lean period.” 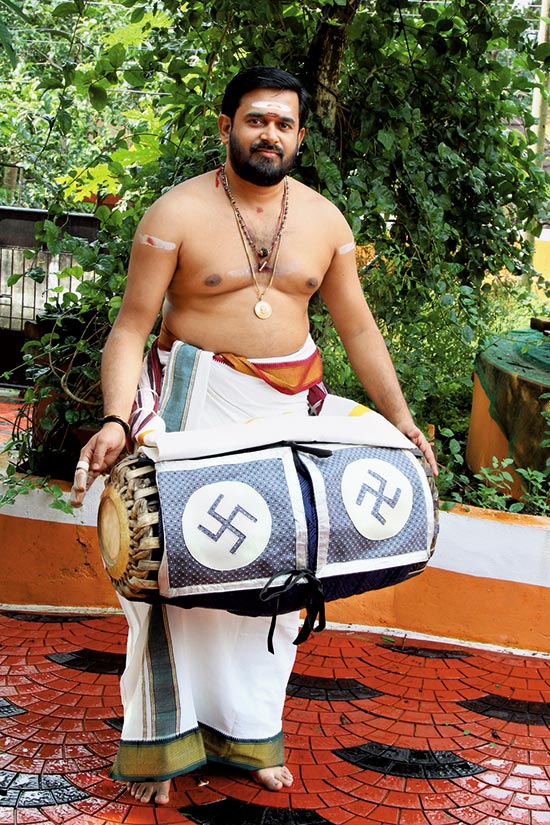 Kavitha Ramu (Bharatanatyam, IAS) and Renjini Suresh (Kathakali, lawyer/politician) are instances from dance,  as is Odissi’s Manaswini Mohanty (engineering). In Kerala, Carnatic vocalist Sreeranjini Kodampally and Nangiarkoothu artiste Salini Harikrishnan teach English in college, even as Kochi has veteran musician N.P. Ramaswamy having worked for a pharmaceutical company till retirement. Hindustani flautist Pravin Godkhindi is a BTech (electrical) from Dharwad’s SDM College, while tabla player Raghavendra Nakod is an R&D engineer with Nokia.

Octogenarian sarodiya Rajeev Taranath, a doctorate in English, taught the language in several universities within his country and abroad, even as sitarist Bimal Mukherjee was Secretary, Food and Civil Supplies Ministry with the government in his native West Bengal. Another veteran sitarist, Pt Bimalendu Mukherjee, now 93, was CEO with Bhilai Coal Mines. Late Buddhadev's son Anirban Dasgupta, also a sarodiya, lives in New York, working for General Electric, USA. Famed tabla player Omkar Gulvady and vocalist Arun Kashalkar had worked for a bank, while celebrated self-made veena player Vishwa Mohan Bhatt once served at the Accountant-General's Office. Scholar-musician Ashok Ranade had Master's in English and Marathi literature (besides a diploma in Russian), while vocalist Sharad Sathe earned a degree in visual arts from Mumbai's JJ School of Arts. Musicians Vijay Koparkar and tabla player Ramdas Palsule have degrees in engineering. Likewise, singer-composer Babanrao Haldankar was a BTech (chemical) even as musician Lalith Rao is among the country's first batch of women engineers. Harmonium player Arwind Thatte holds a doctorate in pure mathematics, while flutist Sunil Kant Gupta works for the Film Institute of India.

While the iconic Kishori Amonkar’s disciple Arun Dravid works as V-P with Jacobs Engineering in California after his PhD from MIT, IIT-Delhi’s computing professor Mausam fondly recalls his Seattle years (2001-13), spent learning classical music and playing the tabla and harmonium at local gatherings. He owes much of it to Ramesh Gangolli, professor of mathematics at the University of Washington, who Raja hails as an “outstanding musicologist”. Based in Manhattan, techie Anurag Harsh, who runs a gaming company, is among the most popular Indian classical musicians online. Boston-based anaesthetist Sapna Govindan dances Mohiniyattam.

Back in Mumbai, vocalist Ashwini Bhide, 57, earned a doctorate from BARC, and briefly taught microbiology. Musician Prabha Atre, 86, has dual degrees, as does mridangist Umayalpuram K. Sivaraman, 82—but neither capitalised on that (though they received doctorates in their art). “It all depends on prioritising,” says danseuse Ananda. “I, for one, don’t cook.”

But then, such people serve up their own kind of feast.