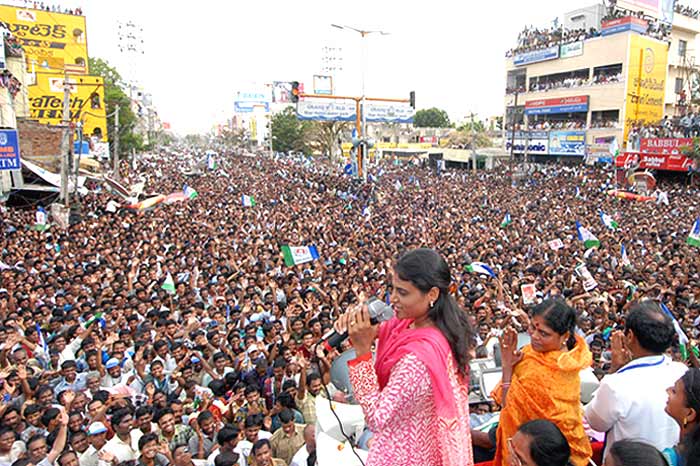 When Y.S. Sharmila Reddy spoke her opening words, “I am Rajanna’s daughter, your Jagananna’s sister. My name is Sharmila,” a young political star was born. YSR’s daughter and Jaganmohan’s sister looked completely at ease as she worked up the crowds into a fine fury about the “ill treatment” meted out to her family. Referring to Jagan’s incarceration in Chanchalguda jail, she said in one speech, “Even if a lion is caged, it still remains a lion.” The crowds swelled as did their roars of approval.

Indeed, after the arrest of the Kadapa MP, the women in the family have displayed enormous strength. While wife Bharati is running the business end, mother Vijayalakshmi (YSR Congress honorary president) and sister Sharmila have taken firm hold of the political reins. Providing star power to the campaign, Sharmila (who YSR in a TV interview said he had named after his favourite actress Sharmila Tagore) is urging people to make Jagan the CM. Exhibiting the traits of a consummate politician, she is having no trouble taking on the Congress bigwigs or Telugu Desam, be it questioning the “conspiracy” behind father YSR’s death in a chopper crash or the “motivated CBI investigation against Jagan”.

“Don’t worry,” urges Vijayalakshmi. “Jagan will be out soon. He will be CM. If a ball’s hit hard, it bounces back.”

“You can say it’s inborn,” a proud Vijayalakshmi tells Outlook. “My children used to watch their father struggle for people in his political career. They have imbibed his values and morals.” Asked about the roles the three women in the family have had to assume, she says with a smile, “Necessity teaches us everything.” She recollects how, as a child, Sharmila would get worked up about her father not spending enough time with the family. “Slowly, however,” she says, “she understood the enormity of my husband’s work.” Currently, though, Vijayalakshmi is careful to emphasise, Sharmila has just supported the campaign and is not interested in politics. YSR Congress workers, however, feel otherwise. “Her manner of waving reminds people of YSR, as does her smile,” they say.

A BCom student from St Ann’s College and an MBA from Muffakham Jah College, Hyderabad, Sharmila divides her time between Bangalore and Hyderabad. Married to evangelist Brother Anil Kumar, who runs Anil World Evangelism, the couple have a son and daughter.

Sharmila’s husband has had his share of controversies. The state, for instance, has recently cancelled an MoU between the Andhra Pradesh Mineral Development Corporation and Rakshana Steels, which the Opposition TDP alleges is promoted by Anil Kumar. Rakshana Steels had access to iron ore in three mandals of Khammam district covering 56,690 ha. Following the cancellation, Br Anil was quick to issue a statement saying he had no link with Rakshana Steels.

It’s unlikely, though, to affect Sharmila’s popularity. Partymen say they are impressed by the alacrity with which Sharmila understood the drill and delivered several hard punches in the campaign. “I’d say she should definitely contest the Lok Sabha elections in 2014,” says a YSR Congress leader, refusing to be named. While the family is unwilling to project Sharmila in an enduring political role, people in the party are delighted to have another YSR heir to look up to.

Their euphoria apart, Vijayalakshmi maintains it’s not her or Sharmila who have worked up the sympathy among voters. “It’s the Congress government which did us the favour, first by arresting Jagan, then by checking my suitcase during the campaign,” she says. When PCC chief Botsa Satyanarayana said he suspected Jagan and my role in my husband’s crash, she says, people were furious. Agreeing that Jagan’s arrest has been the focus in the bypoll, ultimately, she says, it’s the policies of her party and the promise of a “golden rule” a la YSR which people want. “You don’t worry, Jagan will be out soon and he’ll be CM,” she reassures us. Call it the Rayalaseema nerve or the Sharmila effect or the Jagan sympathy wave, these women seem to have the voters in their clinch, for now.