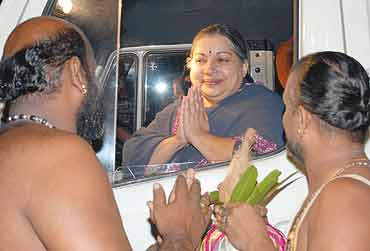 Between them, the two Dravidian parties, bracing up to the realities of coalition-era politics, have trivialised this election. Says K.A. Manikumar, professor of history in Manonmaniam Sundaranar University, Tirunelveli: "There are no real issues now unlike in May 2004 when there was resentment, distrust, disillusionment and anger against the government and its anti-people policies." Both the parties have been resorting to competitive populism, grossly underestimating the voter's intelligence. The DMK think-tank, sensing that the AIADMK was not as beleaguered as it had been during the May 2004 LS election, racked its brains to come up with a strong counter to the freebies Jayalalitha had been offering, especially between November 2005 and March 2006.

"The idea was to divert the women voters' attention," says a confidant of DMK patriarch M. Karunanidhi who was privy to the discussions on the manifesto. A novice DMK Union cabinet minister had a brainwave: an offer of 10 gm gold thali (mangalsutra) to all women entering matrimony. "Women love gold and free thalis will capture their imagination," was the logic. This was jettisoned, and the idea of free colour TVs was born. Rs 2 a kilo rice, two acres of land, free gas stoves, monthly maternity allowance of Rs 1,000 for six months to poor women, Rs 15,000 marriage fund for women etc made for a heady mix in the DMK manifesto. For 15 days, the AIADMK leadership and MDMK leader Vaiko ridiculed Karunanidhi for his "bird-brained, impracticable ideas"; and suddenly Jayalalitha blinked. She decided to offer 10 kg of free rice. As a voter in Madurai said, "Whoever comes to power, looks like we will benefit."