Caught between the war back home and hostility across, the poor Afghans have nowhere to go 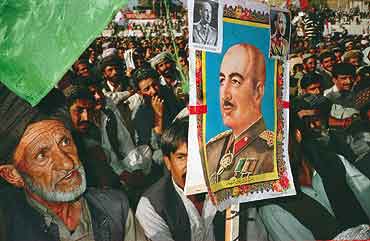 outlookindia.com
-0001-11-30T00:00:00+0553
At the bleak border town of Chaman, Baluchistan, located about 60 km from Kandahar, Habibullah Amin is complaining to the border guards that his family isn't being allowed to cross into Pakistan. Shouting, he waves a handful of Pakistani rupees. Wads of Afghanis, the currency of his homeland, fall from inside his cloak and swirl away in the desert wind. The notes are almost worthless now, more than 1,00,000 to the dollar. He pays no attention as they scatter, nor does anyone else. Habibullah is fleeing poverty, more than the American and British air strikes.

"There's no future," he says. "Kandahar is dying, even before it was bombed. There are no schools. And the choice we have is to come here." "Here" is a wide arid expanse, backed by dry, ragged mountains. Across the Khojak Pass, a lesser known but no less formidable version of the Northwest Frontier's Khyber Pass, lies Quetta and a new life for Afghan refugees.

Like Kandahar, Quetta is poor, drought-stricken and dusty. It's also hostile to Afghans, despite being a majority Pakhtoon city. His bribe finally accepted, Habibullah and his family are told to drive to the oasis of Dara, where the United Nations High Commissioner for Refugees (unhcr) is building a reception centre and a refugee camp. There's no source of water or fuel, but it's at peace. Habibullah climbs back into a battered taxi and rattles off into the distance.

"We are on a new sort of frontline here," says the unhcr's Rupert Colville, an old hand from Kabul. "This is easily the most tense border in the world at the moment, and we've got hundreds of thousands of people waiting to cross if the air strikes end permanently. Unfortunately, we have no place to put them."

In Quetta's Ghausabad neighbourhood, also known as Little Afghanistan, a crowd gathers quickly when foreign journalists arrive. This is a sprawling warren of broken mud huts. Holes in roofs are patched with plastic, shopping bags stretched flat, even torn turbans, anything to block the blazing desert sun. There's no need for a waterproof shelter; it hasn't rained here in three years.

Olia Khan walks up to us, with a bundle of rags clutched to his chest. That turns out to be his six-month-old son, Adamkhan. Olia is also carrying a small bag of medicine. Health worker Faridooh Ahadi, of the Afghan charity Guardians, grabs the bag and stuffs it in his pocket. In rapidfire Pashto, he demands to know why such a young child is to be given antibiotics. A look at young Adamkhan's stick-like legs shows just how ill he is. Olia replies hysterically: "We walked for four days, then rode on a truck. All the money is gone and the baby is sick. He was ill when we left Jowzjan, now he's dying." Ahadi assures the deeply upset young men that Guardians can help. All he has to do is bring him to the clinic. But Olia says the police has already threatened him with deportation.

As we ponder the fate of Olia and Adamkhan, a turbaned man with the Mongolian features of an Afghan Shi'ite bursts into tears. Ahmed Shah is from Faryab province, a violent, clannish place that has long been out of the Afghan mainstream. He too spent his life savings to live as an illegal refugee in Quetta, a move that cost him the lives of two daughters.

"One was walking down the road at Chaman," he shouts, "when a taxi ran her down. The other died of fever the day after when we got here. She was ill from the journey." He points over his shoulder, crying pitifully now, towards his daughters' graves adjoining the colony's communal toilet.

Leaving Ghausabad, we encounter a group of supporters of the Jamiat-Ulema-Islami (jui), the Pakistani militant Islamist group that gave birth to the Taliban. It's the day before the American air strikes and they're anxious that we film their small demonstration and "tell the world how we love Taliban and Osama" as one soft-spoken protester, a boy of 15, put it.

The next day, people from the same organisation were rampaging through Quetta's streets, burning banks, smashing cinema halls and baying for American blood. It was the morning after the bombs and missiles first fell on Afghanistan. Even as the dust was settling around Kandahar, Kabul and other places, mosques in Pakistan were urging the faithful to unleash their fury. Most of the mullahs who called for jehad Monday morning were jui-affiliated, although the group has disclaimed responsibility for the damage suffered in Quetta.

Teargas swirled much of the day, and automatic gunfire clattered through the smoke of burning buildings. The Frontier Corps, crack border guards, were deployed. When they put away their guns, one man was dead, 26 injured. And the fury over the US air strikes intensified by yet more casualties the next day.

"Mera bachcha, mera bachcha, mera phul," screams Fatima Bibi, crouched over the bloody corpse of her 12-year-old son, Hafiz. "Hafiz, Hafiz, get up," she continues, switching to Pashto from Urdu before relatives lead her away. Hafiz was selling sweets by the roadside in Khuch Lagh village, on the road to the Afghan border. A frenzied pro-Taliban mob had attacked the local police stations, again a gesture of anger against America, and nervous constables opened fire almost immediately. Hafiz and two adult men were killed. The Baluchistan provincial information department said merely that three "miscreants, all Afghans" had been killed. The same press note warned of deportation for any Afghan nationals who get involved in riots or unrest.

The provincial home secretary, Asmat Orakzai, is unapologetic about the firing, and the refusal to allow new Afghan refugees. "We've taken so many," he says, "and now with their country under attack, do we really want more here, do we really want their anger? We have, you've probably seen, quite enough of our own."

Ironically, Orakzai's most formidable opponents so far have been Quetta's army of foreign journalists, all under somewhat luxurious house arrest at the five-star Serena Hotel. Metal gates topped with barbed wire, opened and closed by a squad of policemen with Kalashnikovs, bar foreign reporters from leaving the grounds. There are frequent angry confrontations between a press corps used to freedom, and a civil servant accustomed to almost plenipotentiary powers. "It's ridiculous," says freelance photographer Allen Farrell. "We've worked in East Timor, Somalia and Kosovo. I've never been locked down like this."

The foreign media did get a lesson in the diversity of Pakistan on the day the air strikes began, but their education may have been somewhat eclipsed by the first night of bombing. At a football stadium, as the afternoon sun sank behind the barren hills surrounding the Quetta valley, 10,000 men waved royalist Afghan flags and shouted slogans in favour of the exiled former King, Zahir Shah. It was a rally organised by the leftist and Pakhtoon nationalist Pakhtoonkhwa Milli Awami Party (pmap), but representatives of Sindhi, Baluch and Seraiki-speaking Pakistanis were also there.Speaker after speaker denounced the Taliban and—crucially as President Pervez Musharraf continues his attempts to remould his nation in the image of secular Turkey—the isi, whose bearded generals helped found the Islamic student militia in Afghanistan.

"Only democracy, only secular, progressive policies here and in Afghanistan, only peaceful resolution of all our problems with all our neighbours will bring us prosperity and stability," declared pmap leader Mahmoud Khan Acchezai. On the podium, little noticed among the sea of microphones from foreign media, sat the logos of Radio Pakistan and ptv. As a local newsreporter observed: "This is unthinkable, this sort of rally, even last week they wouldn't have allowed it. Now they permit it and cover it on state media. Something very unusual, very dangerous is happening in this country."

Of course the same football stadium was full of jui supporters two days later, baying their support for the Taliban and Osama bin Laden. "Jehad, jehad," screamed a man in a Pakhtoon tribal cap, "jehad until Musharraf is dead." As this extraordinary and frightening crisis unfolds, the general is making new enemies and new friends by the day.