There was a time, not too long ago, when the two indices, Sensex and Nifty, discounted the worst news and continued with their upward spiral. Not any more. Today, investors look at events with shock and awe. And they react with the same emotions. Says Sanjay Agarwal, director (financial services), KPMG, "Markets are usually resilient (during a bull run) but when they get overheated, they react in a magnified manner." This explains why the RBI’s move to hike interest rates on March 30 (Friday) led to a 600-plus fall in the Sensex when the markets opened Monday. 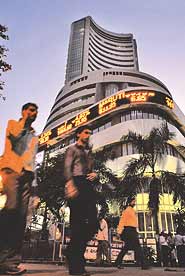 While the huge correction in mid-last year was triggered by external factors—a fall in global metals prices—and there was uncertainty about global liquidity (or availability of funds) early this year, the current nervousness is almost entirely driven by local issues. High inflation, high interest rates, high valuations, lower earnings growth, lower demand, and lower investments are responsible for it. "The markets are perhaps sending out a message that the current weakness is likely to continue," says Agarwal.

Another trend that bolsters this argument is that now the Indian indices are not being impacted by global cues, or market movements in emerging or developed countries. In the last nine days of trading the Sensex has been down, while indices in South Korea, Hong Kong, Brazil and the US were up between 0.5 and 2.3 per cent. Similarly, there’s a disconnect between Indian large cap and medium cap stocks. There are days when the Sensex (comprising large caps) is up, and the mid cap index is down, or vice versa.

What could add to the market woes is the recent revelation that Hassan Ali Khan, who was arrested in Pune for money-laundering, was funnelling money into Indian stocks. His favourite route was through participatory notes (PNs), which are offshore contracts between foreign entities and foreign institutional investors (FIIs), registered with SEBI. Under PN agreements, the foreign entities extend funds to FIIs to trade in Indian stocks.

Before Hassan Ali’s arrest, the national security advisor, M.K. Narayanan, told the Munich conference on security policy that "isolated instances of terrorist outfits manipulating the stockmarkets to raise funds for their operations have been reported... fictitious or notional companies were engaging in stockmarket operations. Some of these companies were later traced to terrorist outfits." The fact is that the government itself has noted cases of manipulations through tainted monies.

In 2005, a three-member committee appointed by the finance ministry hinted that tainted money—from smuggling and narcotics—could be coming in through PNs. Although the committee allowed the practice to continue, the only dissenting note to the report stated that "trading of these P-notes will lead to multi-layering which will make it difficult to identify the ultimate holder of PNs. Both conceptually, and in practice, restrictions on suspicious flows enhance the reputation of the markets and lead to healthy flows." This is true about Hassan Ali, who easily shipped out illegal funds to the tune of Rs 35,000 crore to bank accounts in Switzerland, Mauritius and Caribbean Islands, and slipped them back into India through PNs.

Yet again, there are strong defenders of PNs, which comprise 35 per cent of inflows through FIIs. They account for huge holdings in Hexaware Technologies (32.8 per cent), Indiabulls Financial Services (27 per cent), Geodesic Information (17.2 per cent) and HDFC (14.3 per cent), and whose inflows come through known FIIs like Citigroup ($1.4 billion), Morgan Stanley ($1.2 billion), and CLSA (just over $1 billion).

Says an executive director of a domestic mutual fund, "Money-launderers don’t need to invest through PNs. They can invest directly in India-specific funds launched by the various FIIs. Stopping PNs won’t help." Adds Abheek Barua, economist, ABN Amro Bank, "A large part of investments through PNs is by global hedge funds." Even SEBI chairman M. Damodaran told a TV channel that PNs are important and there’s no thinking of stopping or restricting them.