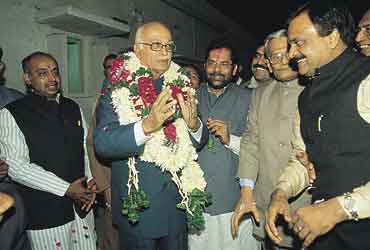 outlookindia.com
-0001-11-30T00:00:00+0553
"The high command of the Congress has become a low command and in future there will be no command."
—BJP president Venkaiah Naidu on the Congress rout in three states

The mood at the BJP's national HQ in Delhi was electric. As news of the saffron surge in Rajasthan, Chhattisgarh and Madhya Pradesh came in, the smiles on the faces of the faithful were infectious. It was a time for hugging and eating laddoos. December 4 will also be remembered as the day when both Holi and Diwali were celebrated at the party's Ashoka Road head office. Crackers were burst, workers and leaders smeared gulal on each other's faces as loudspeakers blasted songs about the blooming of the lotus (the BJP symbol).

A few miles away, the telephone was ringing non-stop at the residence of Pramod Mahajan, the BJP general secretary who was overall in-charge of the poll campaign and is particularly being credited with pulling off a minor miracle in Rajasthan. As soon as Mahajan returned from the PM's residence, defence minister George Fernandes called, congratulating him in Marathi. Gujarat CM Narendra Modi had been phoning repeatedly till he finally managed to catch Mahajan. Then it was Vasundhararaje's turn to come on the line, to discuss a possible date for her swearing-in as chief minister in Jaipur. The BJP's most important ally, Andhra Pradesh chief minister N. Chandrababu Naidu, personally telephoned to convey his congratulations. A buoyant Mahajan told Outlook: "Just wait and see the grand strategy we will have for the Lok Sabha elections. It's a new type of election management, and it has worked beyond all our expectations. This will set a trend for the general elections and the months in between will give us a breather to make up in Uttar Pradesh and Bihar."

There was more than good reason for BJP strategists to pat themselves on their backs. The party had staged a remarkable comeback in a key segment of the Hindi heartland and literally swept the Congress off its feet. As Arun Jaitley put it: "Everyone was giving a 3-1 victory to the Congress. But we have managed what in cricket is called reverse swing." Party leaders are hammering home the point that it won't be a weakened BJP that will lead the nda in 2004 but a BJP that truly believes it is possible to cross the 200-seat threshold in the Lok Sabha.

Indeed, the big message from these polls is that the BJP is a party with tremendous backbone and spunk. A party that has organisational strength and strategic depth to turn around even losing battles and one that continues to evolve and grow even as the Congress atrophies from within. Much is also being made of the fact that the BJP did not turn on the Hindutva tap but fought these elections on issues of development and governance. Party general secretary Mukhtar Abbas Naqvi says: "I don't see why Hindutva should be an issue in future elections."

This is why BJP leaders stress that these polls are decisive in the party's evolution. For the first time, the BJP has won handsomely in the assemblies without raising mandir-masjid or orchestrating communal riots. Partymen also take delight at what is being called the new BSP factor. Not the Bahujan Samaj Party whose leader Mayawati's promise of defeating the BJP has been proved hollow, but what BJP leaders call their new ally, bijli-sadak-paani. Spokesman Prakash Javadekar believes that "a new terminology has emerged".

Still, no one can lose sight of the fact that the BJP empire continues to be constructed on bricks laid by the larger Sangh parivar. The conquest of tribal India would not have been possible without the hard work done by rss outfits like the Vanvasi Kalyan Ashram. The first signs had come from Gujarat, where some of the worst communal mayhem was witnessed in tribal pockets which were later swept by the BJP.Tribal Gujarat was in fact the epicentre of the political quake whose aftershocks have now demolished the Congress in its similar strongholds in adjoining MP, Rajasthan and Chhattisgarh.

The BJP, meanwhile, is taking great delight at Sonia Gandhi's predicament. Party strategists see her as a vulnerable queen whose best knights have all fallen in the battlefield. The remarkable and suave Digvijay Singh, the clean and earnest Ashok Gehlot and the controversial but talented Ajit Jogi were all strong CMs who were considered the backbone of the Congress. So has Sonia been softened up for the big kill? As a senior parivar strategist put it, "It is because of Sonia Gandhi that parties like the NCP and the SP fielded candidates in MP and Chhattisgarh...which worked to our advantage. We see her as the biggest liability for our opponents and our biggest friend."

The contours of the pitch for 2004 have now become clear. Prime Minister Atal Behari Vajpayee will be the central figure around whom the entire campaign will be structured. Mahajan describes it as "a semi-presidential US style election for the whole country that will pitch Vajpayee against Sonia". And Sonia will now make a great punching bag. A senior BJP strategist says: "The foreign origin issue is always there. Besides, the parivar cadres will ask whether the Congress can only find a Christian to lead it. Our feedback is that the Christian issue worked against Ajit Jogi at the grassroots."

Still, overt Hindutva is not on the cards. With Vajpayee playing the great helmsman, it is certain that there will be another round of attempting peace with Pakistan. Highly placed party sources also reveal that another go at "solving" Ayodhya is very much on the cards. Feelers have already been sent to Mulayam Singh Yadav to exert pressure on Muslim hawks while the BJP hopes to "manage" the Hindu hotheads. A "solution" involving the undisputed part of the Ayodhya site is being worked on, say sources.

Mahajan, in fact, stresses that at this moment "Hindutva is on the backburner". Still, unforeseen events such as a major terrorist strike or a hardening of Pakistan's position could change the atmospherics before the general elections. But at the moment, the BJP has everything to gain from walking the moderate path. The party, after all, has to carry all its nda allies into the electoral battle next year, besides wooing fence-sitters like the NCP and SP. Moreover, there is the 'resurgent India' pitch that BJP strategists describe as a feelgood economic factor working in its core middle-class constituency.

Many years ago, the BJP's most brilliant strategist L.K. Advani had spoken of the need for an agitational party to transform itself into what he called "the party of good governance". At that time, many BJP hotheads thought Advani was speaking Greek. But today the party appears to be travelling down that path. And the BJP can draw great satisfaction from the fact that this election marks the coming of age of second-generation leaders like Pramod Mahajan and Arun Jaitley who charted the course of chief ministerial aspirants Vasundhararaje and Uma Bharati.

At the moment, Vajpayee remains the BJP's greatest asset. There is, however, a lurking concern over the fact that by the time the general elections take place he will be 10 months older. But the party's future appears secure in the hands of its second generation. That is the other big message from an election that is being seen as a watershed in the evolution of the BJP.

The final word, however, must go to the irrepressible—if unsubtle—Venkaiah Naidu, the BJP president. The Congress, as he pointed out, had been threatening to demand early general elections after these polls. "Now will the Congress put that demand into remand?" he asks.He's also got the slogan ready for 2004. Nothing ridiculous like lohpurush or vikas purush. This time around, he's come up with a straightforward slogan—"Shaktishali Bharat ke liye Shaktishali BJP (A strong BJP for a strong India)." A message that rests not on negating the other, but a plain affirmative shorn of rhetoric.