He might have grudged visitors his famous coffee, but generosity pervaded his writing and spirit 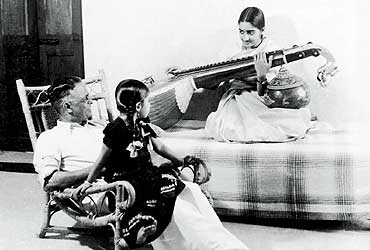 outlookindia.com
-0001-11-30T00:00:00+0553
A living writer, noted R.K. Narayan, unlike a dead writer who’ll stay conveniently still while you’re analysing him, "is like a live lobster on your plate". But even in death, Narayan remains a live lobster: just when you think you have him pinned down, he jumps up at you in yet another avatar. Who was the real Narayan? A bespectacled bore who roamed around Mysore bazaars in trademark white veshti, exchanging inanities with shopkeepers, or a scintillating conversationalist who loved nothing better than to engage in a stimulating discussion with anyone, regardless of class or age, on anything? A skinflint who grudged visitors a cup of his famous coffee, or someone who advanced loans to any acquaintance in need? A writer content to dwell in an ambling small town, live on curd-rice, or a no-drink-no-meat cosmopolitan who revelled in the nightlife of New York and Hollywood? An eccentric who communicated with the dead, saw ghosts and lived in fear of thieves and burglars, or "a citizen of the world" who took a lively interest in politics and civic administration? His friends say he was all these things, and more.

"He laughed very easily," recalls one friend, S. Krishnan. And he laughed at everything—politics, political personalities, eccentrics, writers and most of all, himself. "Once he bought a very expensive hearing aid while he was in Frankfurt," recounts Krishnan. "But I never found him using it and asked him why. His wry remark: ‘It’s too expensive to use’."

In Mysore, Narayan became infamous for his parsimony. When K.B. Ganapathy, editor of Star of Mysore, first became friends with him, his acquaintances solicitously enquired if he was offered even a cup of coffee. Ganapathy, like Narayan’s other friends, was indignant at the slur. "Narayan," says Krishnan, "had a healthy respect for money. Within 20 years of his career, he’d built a home, got his daughter married and travelled abroad. He did drive a hard bargain with his international publishers, but never cut costs when it came to enjoying himself, staying at the best hotels, driving a Mercedes Benz even if it was to go to Coimbatore to visit his daughter." He also had a whole team of auditors to handle his huge earnings.

He also loved to socialise. But preferred doing it outdoors than at his home in Yadavgiri. "He had so many friends, many of them ordinary people like madaris or monkeynut sellers on the streets," recalls H.Y. Sharada Prasad, who lived next door to Narayan for many years in Mysore. "Going for a walk with him was an experience, as he’d keep stopping by people to ask how their business was or stop to stare at the waiter in Udupi who he claimed served with more style than any waiter at Tiffany’s."

Gopal Gandhi met him 38 years ago, at the residence of M.S. Subbalakshmi. "Jaiprakash Narain was there too," he recalls, "and complained to RK about how he was approached by youngsters in the US for autographs as they mistook him for the famous author. RK just chuckled."

Narayan also loved to read anything, from newspapers to The New Yorker to P.G. Wodehouse to Keats and, of course, the spate of Indo-Anglian novels, "especially The Golden Gate, which he loved," on all of which he had decided opinions. In fact, recalls Gandhi: "He was like good Mysore coffee, strong without being rich, original without being exotic—he had his own flavour." Or, as Narayan himself once described the coffee from his hometown: "Sweet enough to cut the bitterness, but not sugary. "