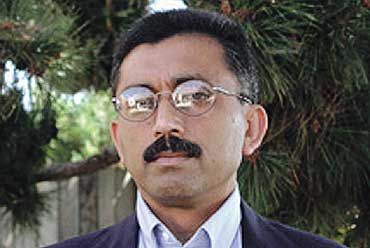 outlookindia.com
-0001-11-30T00:00:00+0553
You’re free to admire the dedication of scientists like Ajit Varki but you can’t help but be a little unnerved as well. After all, here’s a man who was so intent on understanding the fundamental difference between humans and primates that he actually drank ape serum. Squeezed it out of some animal tissue, mixed it up with fruit juice (we recommend orange) and downed it. Well, counters the biologist from San Diego, "Who else would do it?" Now that’s passion.

When the results came in, the 50-year-old Varki discovered, with some shock, that the simian substance—a sugar known as sialic acid—had permanently entered his system. With one swig, the scientist had undone millions of years of human evolution. "I ran into the fact that humans were missing one type of sialic acid," says Varki, who initially trained to be a physician before settling into research. "It’s because humans are mutants. We have a genetic defect. Somewhere along the course of human evolution, we lost the ability to make this sialic acid."

But the real impact, for now, lies elsewhere. Aside from helping us better understand what makes us human, the Varki lab (he runs the lab with his pathologist wife, Nissi, currently in India) has shed light on a relatively new branch of science. "You always hear about RNA and DNA and you think that’s all there is to biology," says Varki. "But every cell is covered with a thick coat of sugars which nobody’s paid attention to. It’s like the icing on the cake. That field was kind of left behind because it was technically difficult to study. But now it has a name: glycobiology."

Sugars play a major role in the spread of several diseases. Viruses for the common cold and the flu bind to sialic acid and some cancers have their own sialic acid which they use to spread through the body. But the kind of sialic acid Varki consumed is what we lack. Cows, pigs, dogs and apes have plenty of this sialic acid but in their brains and in extremely low levels. This suggests that by its absence it played a role in human brain evolution.

Varki received his medical training at the Christian Medical College (CMC) in Vellore, which is where he met Nissi. He pursued post-graduate work in haematology at Washington University, St Louis, before settling down at the University of California at San Diego. There, he serves as the director of the Glycobiology Research and Training Center. In recent years, he’s served as the president of the Society for Glycobiology and editor-in-chief of the Journal of Clinical Investigation. He’s also received awards from the National Institute of Health and the American Cancer Society.

For alma mater CMC, he has helped establish an alumni group which, apart from raising an endowment for research, has organised two upcoming symposiums, one on cellular and molecular biology and a later one on neurological sciences. "My most precious thing is my time," says Varki. "By giving back and spending my time I think I’m contributing something very important to me."